Warning: session_start() expects parameter 1 to be array, string given in /home/customer/www/scottishreviewofbooks.org/public_html/wp-includes/class-wp-hook.php on line 307
 Voltaire versus Lord Kames and the need for a soundbite – Scottish Review of Books

The National Library of Scotland will shortly open a major new exhibition on the Scottish Enlightenment. Robert Betteridge, Rare Books Curator (Eighteenth-Century Printed Collections), considers how best to capture the essence of this remarkable era.

‘Edinburgh is a hot-bed of genius.’ wrote Tobias Smollett in his satirical epistolary novel The Expedition of Humphry Clinker, first published in 1771. Though Edinburgh-centric this quote gets across the idea of ‘genius’ so associated with the Scottish Enlightenment – the subject of a forthcoming exhibition at the National Library of Scotland in Edinburgh. In a similar vein is ‘Here I stand at what is called the Cross of Edinburgh, and can, in a few minutes, take fifty men of genius and learning by the hand.’ This was said by a Mr Amyat, the King’s Chemist, and appears in a work published in Edinburgh in 1800: Literary and Characteristical Lives by William Smellie. Could either of these quotes sum up the theme of the Library’s display and capture the public imagination?

David Hume, philosopher, historian and central figure of the Scottish Enlightenment, not surprisingly, has a couple of phrases that can be called upon to answer the need for a pertinent line or two. Writing to his publisher William Strahan in 1770 Hume proclaimed ‘I believe this is the historical age and this the historical nation.’ Earlier, in 1757, he had written to Gilbert Elliot of Minto and after outlining Scotland’s want of a court, parliament, etc. stated ‘I say, that, in these circumstances, we shou’d really be the people most distinguish’d for literature in Europe?’ This second, though requiring the extra piece of context that dilutes its immediacy as a soundbite, brings in the further dimension of a nation distinguished beyond its borders.

François-Marie Arouet, known by his pen name Voltaire, was one of the great figures of the Enlightenment. Born in Paris in 1694 he became known as a historian and philosopher, critic of the Roman Catholic Church and an advocate of freedom of religion and freedom of speech. It is Voltaire who, supposedly, gave us one of the most inspiring quotes to describe Scotland in the age of Enlightenment: ‘We look to Scotland for all our ideas of civilization’, (‘Nous nous tournons vers l’Écosse pour trouver toutes nos idées sur la civilisation’). This has everything a great soundbite needs: short, to the point and by a famous and respected person. A search of the internet shows it to be widely used to show Scotland in a positive light. And it’s not just the internet; the quote also appears in Arthur Herman’s best-selling popular history The Scottish Enlightenment: the Scots’ Invention of the Modern World. But consider this quote again in light of the two principle things which define an Enlightenment culture. One ­– the freedom to have ideas and discuss them in public without fear of repression from authority and two ­– to question received wisdom, whether that be handed down from Scripture, Aristotle, or what we find online. Questioning the quote attributed to Voltaire raises the immediate problem: where did it come from? Taking up another Enlightenment thread, can it be subjected to reasoned enquiry and a reliable source located? 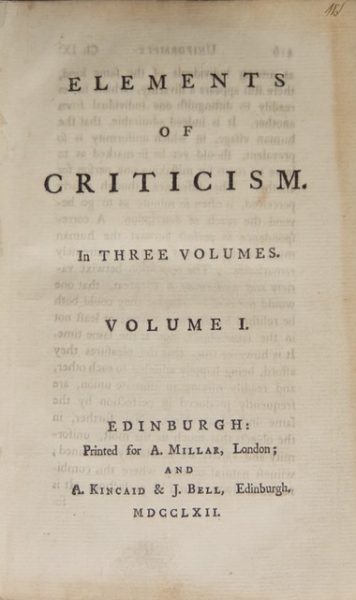 The source can be found but the original material is misquoted, or at best paraphrased, and with fuller context can be seen to be misappropriated by many of those who use it. The Paris-printed Gazette Littéraire de l’Europe for Wednesday 4 April 1764 carries a letter to the editor from Voltaire with a review of Henry Home, Lord Kames’s Elements of Criticism, first published in Edinburgh in 1762. Home was an advocate by profession and took the title Lord Kames when appointed to the bench in 1752. He wrote on a great variety of subjects but his work was not always well received, having a reputation as lacking fluency. In 1782 the Reverend Hugh Blair, minister of St Giles’ Cathedral, described the Elements as ‘hard, crabbed & dry’ in a letter to his publisher William Strahan (in an attempt to justify a larger payment for his own Lectures on Rhetoric and Belles Lettres which would be published the following year). Samuel Johnson, pushed by James Boswell to give his opinion on contemporary Scottish writers is recorded in the Life as saying ‘You have Lord Kames. Keep him; ha, ha, ha! We don’t envy you him.’ Voltaire too is critical of Kames’s style and the review carries an undercurrent of scorn which seeks to undermine the work through reproach of the author’s depth of understanding and choice of examples. It is on page 98 of the Gazette that the text that has become ‘We look to Scotland for all our ideas of civilization’ can be found. Translated from the French it reads ‘It is a wonderful effect of the progress of the human mind, that today there comes to us from Scotland rules of taste in all the arts, from epic poetry to gardening.’ So, neither mention of looking to Scotland, nor our ideas of civilization, but the gist of the quote is there and, taken in isolation, paints a positive view of Scotland. However, Voltaire is being sarcastic and immediately continues with the criticism that ‘It is true that we would still better like to see great artists in these countries than great reasoners on the arts; one will always be more likely to find writers able to make an Elements of Criticism, like Lord Kames, than a good history, like his compatriots M. Hume & M. Robertson.’

Kames drew the ire of Voltaire for several criticisms made in the Elements against his poetry and plays. In one such example in chapter 18 Kames writes that Voltaire ‘indeed candidly owns, that even with the support of rhyme, the tragedies of his country are little better than conversation-pieces. This shows, that the French language is weak, and an improper dress for any grand subject. Voltaire was sensible of this imperfection; and yet Voltaire attempted an epic poem in that language.’ Voltaire was jealous of France’s status at the head of the Republic of Letters and comments such as this no doubt influenced the tone of his review, not just directly regarding Elements of Criticism, but of Britain’s (note his use of ‘these countries’ above) rising cultural influence. If not before, Kames was made aware of Voltaire’s review by James Boswell in a letter of 27 September 1764 which is reproduced in Boswell’s Journal. Boswell was on a Grand Tour at the time and while in France visited Voltaire at his home at Ferney near the Swiss border. There he discussed Kames with Voltaire and the Frenchman’s refusal to admit writing the review only increased Boswell’s suspicion that he had, something he was confirmed in when he saw Elements of Criticism in Voltaire’s library a few days later.

There is a great irony in the perpetuation of a misquotation which celebrates an age that looked to redress the recurring faults of the past. Even more so when we consider that Voltaire’s original intention was to belittle rather than praise Scotland. Such was the flourishing of intellectual thought in Scotland during the 18th century that, misquoted and misappropriated as it is, Voltaire’s supposed remark has the ring of truth that makes its continued use more likely than not. The histories of David Hume and William Robertson, the biography of James Boswell, Kames’s Elements of Criticism and even Hugh Blair’s canny letter trying to squeeze more from his publisher, along with over 100 other items documenting the Scottish Enlightenment, all feature in the National Library’s exhibition.

The National Library of Scotland exhibition Northern Lights: the Scottish Enlightenment runs from 21 June to 18 April 2020. Treasured Library items are being shown, including a first edition of Adam Smith’s ‘The Wealth of Nations’, a copy of David Hume’s ‘A Treatise of Human Nature’, and a rare first edition of Encyclopaedia Britannica.

Also going on display are letters and documents written by the Enlightenment ‘literati’, which reveal some of the original thinking, arguments and reasoning of the period and give a sense of its significant impact on the world.