Warning: session_start() expects parameter 1 to be array, string given in /home/customer/www/scottishreviewofbooks.org/public_html/wp-includes/class-wp-hook.php on line 303
 The Eye of a Stranger: Henrietta Liston’s Turkish Journals – Scottish Review of Books

Henrietta Liston, wife of a British ambassador to the Ottoman Empire in the early nineteenth century, recorded her travels in a private journal, now held in the National Library of Scotland. Together with academics from Bilkent University in Ankara, the Library is currently working to publish the journal for the first time. Dora Petherbridge, Curator of US & Commonwealth Collections, and Dr. Patrick Hart, Assistant Professor of English Literature at Bilkent, introduce Liston’s Turkish exploits.

‘If I live to come home you shall see this and everything else that I thought worth putting down more particularly detailed in a kind of journal I sometimes write.’ (Henrietta Liston, draft of a letter to a friend, 26 September 1813)

Henrietta Liston did indeed survive to return home from Turkey to Scotland, as did the journal of her extensive Anatolian adventures. Bound in a handsome brown calfskin quarto with ‘LISTON’S TRAVELS’ tooled in gold across the cover, Henrietta’s manuscript is held among the Liston Papers, an expansive archive purchased for Scotland by the National Library in 1936. Alongside reflections on political relations in Europe and the Middle East at the time of the Napoleonic Wars, and reports of mysterious assassinations, Liston describes her more personal experiences in the Ottoman Empire. Ranging from a visit to the harem of the Kaimakam (the governor of Istanbul) to watching the departure of pilgrims on the hajj, these experiences are all detailed in a distinctive voice that fuses a phlegmatic yet often charmed shrewdness with a human-centred sense of the picturesque.

In 1811 Henrietta’s husband Robert had been appointed British ambassador to the Sublime Porte of the Ottoman Empire at Constantinople: ‘Ma chérissime amie […] the transaction is complete […] my appointment will appear in the Gazette of next Saturday’ he wrote to her, adding with characteristic playful understatement, ‘I hope you will find the frolic agreeable.’ Their frolic was to be played out against the background of ‘Bonaparte’s ambition’, the Congress of Vienna, the Russo-Turkish conflict, Ottoman reform, outbreaks of plague, and the clamour of Grand Tourists seeking ambassadorial assistance. Robert had first become ambassador to Turkey in 1794, the same year the very first Ottoman ambassador to Britain, Yusuf Agâh Efendi, had arrived in London. After appointments to the United States and Denmark, Robert was called out of retirement and returned to the Ottoman Court at the age of almost 70. Henrietta, at 61, accompanied him: they were the most senior figures at Constantinople among their European ‘diplomatic brethren’.

The posting was the finale of the Listons’ career; it began on 8 April 1812 when they sailed from Portsmouth on the Argo, with a considerable diplomatic suite. The Listons reached the Dardanelles and ventured into Anatolia in June, in time for cherry season and just days before Napoleon marched for Moscow. The cherries, Henrietta recorded, were ‘in great perfection’, while ‘the war betwixt Russia and France’ remained ‘the circumstance which most interested and occupied’ her and Robert for months. The Listons were not to finally return from their Turkish embassy until some eight years later, in 1820.

The Liston Papers not only preserve Henrietta’s Turkish travel writing, but document decades of the Listons’ lives through personal correspondence, official dispatches, financial papers, passports, contracts, chits, and invitations. Letters from friends, colleagues and family create a kaleidoscopic view of Europe in the age of revolution. Containing hundreds of manuscripts relating to the Listons’ time in Turkey alone, the archive charms and challenges. Its contents, in English, French, Greek, Italian, Ottoman Turkish and several other tongues, include a diplomat’s cipher; a plan of the Turkish and Persian frontiers; Liston’s meteorological diary (1st Aug 1814, a dry day, north wind, 76˚Fahrenheit at noon); a recipe for Turkish ink (50 drams gum arabic, 100 drams rainwater); fascinating expenses accounts (listing, for example, 200 piasters to Wenzel the fiddler for music at an embassy ball, and payments for Italian wines purchased from the Genoese merchants of Galata), and Ottoman travelling firmans (edicts or decrees).

Among all these intriguing documents Liston’s journal stands out. A vivid material trace of her complex relationship with the East, it sits between eighteenth-century accounts like Lady Mary Wortley Montagu’s 1763 Turkish Embassy Letters (to which it repeatedly refers) and Victorian texts such as Julia Sophia Pardoe’s The City of the Sultan (1837). Full of opinion, curiosity and wonderment, it reveals Liston’s interest in the spectacle of imperial power and her awareness that she looks at Turkey with the ‘Eye of a Stranger’. Perhaps most intriguing, though, are her descriptions of her encounters with Turkish women of various ranks, where appreciative surprise tends to be the dominant note. On meeting the wife of the Kaimakam she ‘was both pleased & surprised at the frankness & kindness of her behaviour’. Her hostess, Liston reported, ‘took occasion to say, as she had probably been instructed, that her Pasha, & many good Turks, thought the English the best Allies Turkey could have; they had always found them upright & honest, & not telling lies. I replied that I believed it to be the wish of England that the Turks should continue Great & Independent.’ The Kaimakam’s domestic arrangements caused Liston ‘no little surprise at seeing a respectable looking woman, – lawfully married […] living familiarly in the circle of her Husband’s Mistresses, & appearing pleased with their Society.’ Where she had expected to find jealous rivalries, Liston instead found generosity. Dining with her new companions, she ‘was astonished at the expedition with which the Women eat with their fingers, – taking up more at once, even of liquid, than I could with my Spoon, & I was amused at their kindness, whenever I managed my Spoon so awkwardly, as to take up very little, they never failed to fill it for me with their fingers.’ 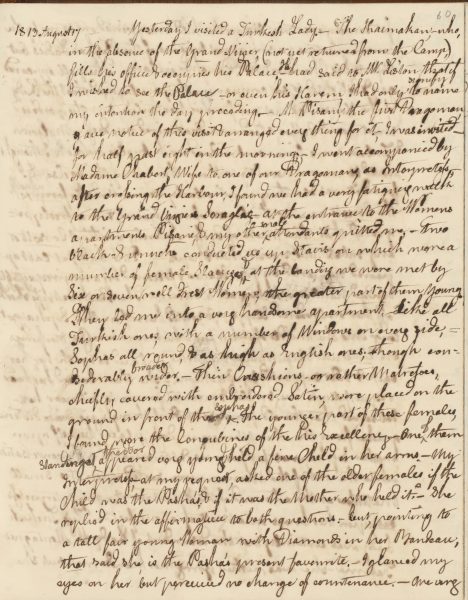 Liston’s game failures seem to have helped her hosts relax, and to have thereby allowed her a rare glimpse into a world generally closed to outsiders: ‘These Women became at last so familiarized to me, that the younger ones could with difficulty refrain from Romping & I perceived them laughing with the Eunuchs’. Admiring the women in the baths of Bursa, Liston had occasion to observe that ‘Lady Wortley Montague was right – they were all after the figure of Eve, & a scarf of Cloth or silk around the waiste, was the whole dress […] I found the Bathers Strolling, – sitting – & lolling in every corner. – In buff.’ An artist, she adds, ‘might with great effect have taken their different attitudes, while the light was beautifully thrown in from the roof. – one very lovely Woman sat, busily employed in dying the hair of a young Girl […] while another lay reclined in the act of bathing a beautiful Infant. The scene was strange, but it was picturesque & fine.’

We do not know whether Liston did ever share her journal’s contents with her friend, or with anyone other than her husband. It never appeared in print, and has remained almost unknown to common reader and academic expert alike. That is now about to change: autumn 2020 will see the journal’s first publication, 200 years after the Listons left Turkey for the last time. A collaboration between the National Library of Scotland, Bilkent University in Ankara, and Edinburgh University Press, Henrietta Liston’s Travels: The Turkish Journals 1812–1820 will introduce Liston’s journal and associated writings to a wider readership, framing her travel writing in its Ottoman and diplomatic contexts, and situating it in relation to other British women’s travel writing on Turkey. We hope that this celebration of Henrietta Liston’s writing will inspire readers as much as Turkey inspired her.

For more on Henrietta Liston’s Turkish travels, visit http://liston.bilkent.edu.tr/. For more on the Listons in general, and to read about their time in North America, visit https://digital.nls.uk/travels-of-henrietta-liston/or watch more about their life in the Ottoman Empire in a short video. 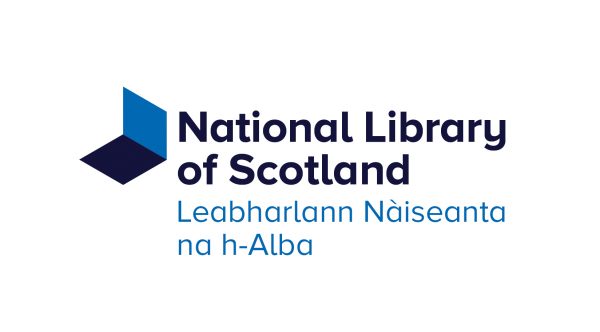