Warning: session_start() expects parameter 1 to be array, string given in /home/customer/www/scottishreviewofbooks.org/public_html/wp-includes/class-wp-hook.php on line 307
 Tom Leonard – 1944-2018 – Scottish Review of Books

As a tribute to Tom Leonard, who died at the end of last year aged 74, here is a review by Alasdair Gray, which first appeared in Scottish Library Association News in 1984, of the poet’s Intimate Voices: Selected Work 1965-1983. 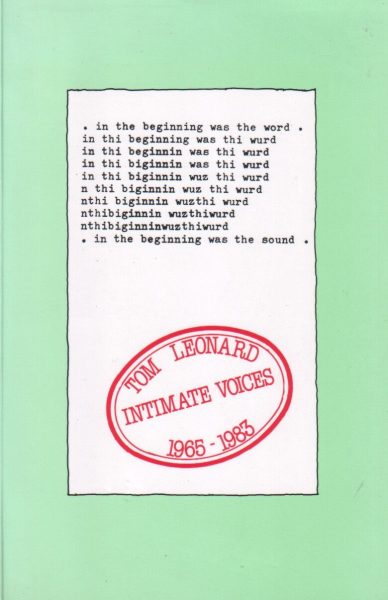 Would good poetry die if schools and universities did not teach it? Perhaps, and this is sad, for if a poem is first read for an examination it will be a coincidence, not a consequence, if the reader enjoys it. Everyone with an English certificate knows Wordsworth described states of mind regarding lakes, rocks, daffodils and London from Westminster bridge. How many of us use Wordsworth’s language to help us see, think and feel? Tom Leonard’s poem ‘The Good Thief’ is now set in university English courses, so nearly every literate Scot knows he writes poems in phonetic, working-class Glaswegian, poems which are tough (as opposed to sensitive) and comic (as opposed to serious) because the working-class, especially our Glaswegian division, are inescapably tough and comic, right? So if you are a conservative upholder of traditional literary value you will hate Tom’s poetry, and if you are a warmhearted liberal or radical you will love it, right?

Wrong. Readers who choose to learn about Tom’s work from this entire book of it – and I wish all Scottish readers would – will discover a range of thought and feeling too great for the glib classification learned in classrooms. Leonard’s Glasgow patois poems are not (though one of them, ‘Good Style’, pretends to be) an iconoclastic attack on other sorts of diction. He brings Glasgow speech to literature to increase literature, not to knock it out. He uses language from every corner of his intelligence, and uses a different personality and therefore a different diction for nearly every statement he makes. To understand the patois poems the reader must first say them aloud. If you know that the ear has precedence over the eye in the enjoyment of all good poetry you will find this no hardship. If you do find it hard then begin by reading five short verses in ordinary spelling: ‘The Voyeur’ and ‘Four of the Belt’; ‘My Families’ Livingroom at Christmas’, ‘Placenta’ and ‘Fathers and Sons’: two monologues and three remarkable love poems which prove that Leonard’s poetry is simultaneously comic and serious, tough and sensitive. After reading these more than once, and finding more in them at each reading, you will gladly make the connection of print, eye, tongue and ear which lets you enjoy the patois poems. Then you will hear yourself sounding like that condemned Glasgow criminal who whiles away the last Saturday of his life by extending a few comradely words to the God who made him, who was also in a bad way at the time. You will pass through as many characters as in a novel by Dickens: schoolgirl, manual worker, housewife, electronics fanatic, college intellectual, son, lover, husband and parent, all compressed by poetry into a few terse lines. Tom Leonard clearly identifies with all of these people. Only half of them can be identified with him. I am tempted to say that Intimate Voices speaks for a whole city. Impossible, but it speaks with more tongues than usually gets into a book. 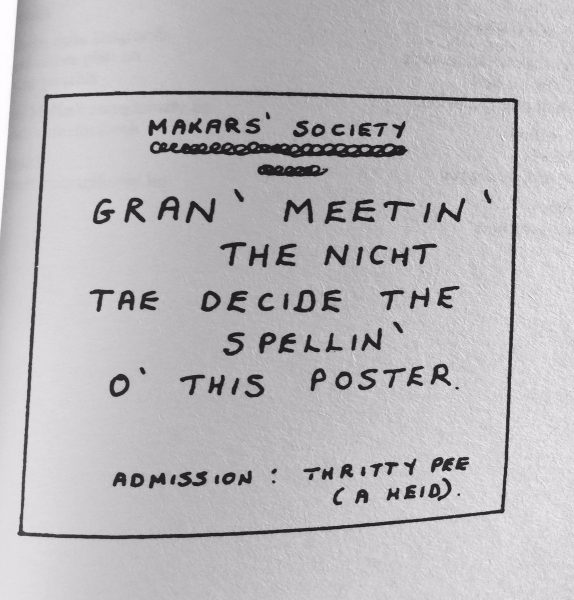 In France and Germany Leonard is known as a sound or conceptual poet, and classified with Ian Hamilton Finlay. Intimate Voices contains all poems of this sort which can be rendered typographically. Readers should not think too hard of themselves, or of Tom, if they cannot enjoy all equally. The book also contains the short story ‘Honest’, two fine critical essays and some cartoons which struck me as funny as Thurber’s, though their drawing makes Thurber’s cartoons look more like Raphael’s than I ever thought possible. There is a lot of work, thought, feeling and love in this small volume, published in paperback and hardback by Galloping Dog Press, Newcastle. Is it parochial to wish that a major Glasgow publishing house had issued it? Of course. We no longer have one.