Warning: session_start() expects parameter 1 to be array, string given in /home/customer/www/scottishreviewofbooks.org/public_html/wp-includes/class-wp-hook.php on line 307
 Scotland’s Bookshops – The Watermill, Aberfeldy – Scottish Review of Books

Tell us the story of your shop

Moving to Aberfeldy in Perthshire 14 years ago, we found a semi-derelict grade-A mill building. Six months of building work later, The Watermill Bookshop, Café & Gallery was opened by Michael Palin. Since then we have had fantastic support from our local customers and from regular visitors, who come from all over Scotland. A walk in the Birks of Aberfeldy, a visit to The Watermill, a film at the local community owned Birks cinema. What better way to spend a winter weekend! A few years ago we won the ‘Independent Bookshop of the Year’ award and last year we were amazed to be included in the New Yorker book Footnotes – The World’s 75 Greatest Bookstores.

Where do you fit in?

Dorothy and Sally have been running the bookshop side of things since we opened so my job is to interfere, prod, nudge and see things by standing back a bit. Also I usually end up moving furniture around in our interiors shop Homer, which is next door.

What makes your bookshop stand out from others – physical and online?

There aren’t many bookshops in a grade-A listed watermill! It is a unique environment, where we have managed to retain old machinery and fashion it into display surfaces for books. The combination of books and coffee is a well-tested one and on a winter’s day we add a roaring wood-burning stove. Online shops won’t have a patch on us until they learn how to deliver a good Flat White.

Do you have a local author who visits the shop? Which author event has drawn the biggest / most interesting audience?

Sandy (Alexander) McCall Smith has been here twice, his last visit was on the eve of polling last June, with a crowd of nearly two hundred people. Other author visitors include Linda Cracknell (most weeks!), Ian Rankin, Jim Crumley who has done a series of wonderful talks about nature and the environment.

Who wanders in through your door most often? / Which customer has taken you by surprise?

We’ve got customers who use the coffee shop EVERY day – Not a bad form of retirement. Probably the biggest surprise was a few winters ago when there was at least a foot of snow on the ground and some customers came on skis. 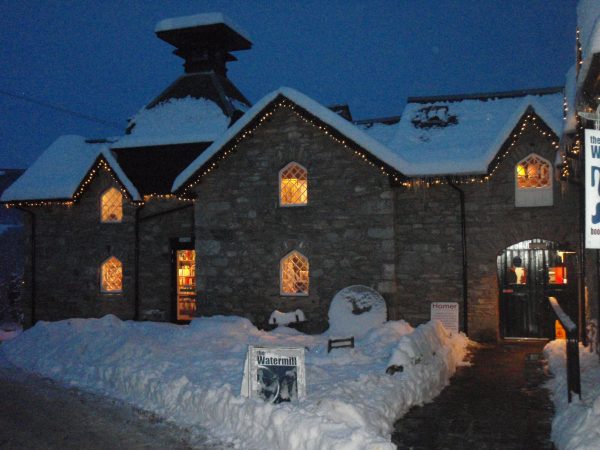 What’s the most ridiculous request you’ve ever had?

To open a bookshop in the remotest town on the mainland, Fort William! An author friend bumped into me one Sunday morning back in April. He’s from the Fort William area, a town where there hasn’t been an independent bookshop in living memory. He is also very persuasive. Just three months later The Highland Bookshop was open.

Where did your love of the printed word begin?

When I was about seven years old, reading comics in bed by torchlight. And more recently discovering Scottish writers like James Robertson, Kathleen Jamie and Ian Rankin.

Which book has influenced you most / which poem talks to your soul?

I have just finished Chris Brookmyre’s Places in the Darkness in preparation for an event at the shop. Brookmyre skilfully uses the platform of a society of the future to consider many of the issues confronting present day society. My current reading pile includes Talking To My Daughter About The Economy by Yanis Varoufakis and Graeme Macrae Burnett’s Accident on the A35 which promises to be a great follow up to His Bloody Project.

In February we are expanding The Highland Bookshop into a second floor, which will be Scotland’s largest selection of specialist outdoors books, along with mountain art. Then it will be time to take a breather. or me that will mean visiting one of our sons in the Alps and getting some skiing in – unless there is a good winter here in which case I will be stopping at Glencoe on the way to visit The Highland Bookshop.