Warning: session_start() expects parameter 1 to be array, string given in /home/customer/www/scottishreviewofbooks.org/public_html/wp-includes/class-wp-hook.php on line 307
 Rusticated… (III) – Scottish Review of Books 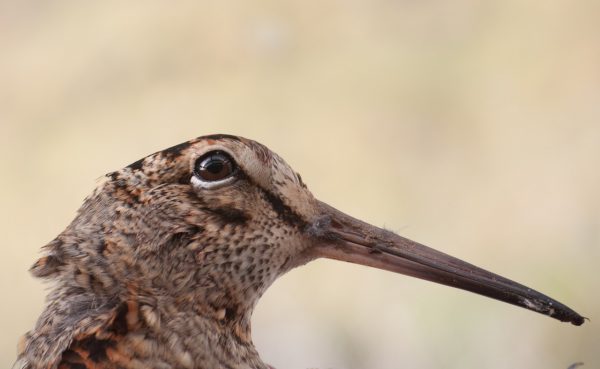 We hardly know each other, but if you’ve even briefly eavesdropped one of these ramblings you’ll know that I suffer from a condition called RSH, or rurally specific humiliation. In essence, this distressing ailment causes the sufferer to do improbable things in the open, on the basis that, ‘Hey, I live in the wilds; who’s going to see me?’ At its most basic, this involves peeing ad lib, with the freedom and regularity of a street dog; I persuade myself that it helps keep deer away from the garden and the produce. But it can take more elaborate forms. Recovering from bronchitis recently, I attempted a brisk climb of Cnoc Dhu. Turning to take in the scenery from the forestry road – there’s a clue there – I decided to celebrate renewed health and breath with a full-throttle recitation of “On First Looking Into Chapman’s Homer” (I think it was the “stout Cortez” reference that inspired it), only to turn round and look full into the startled eyes of a woodman holding an as-yet unstarted Husqvarna chainsaw. “Keats”, I said. Then “I see you’re a Husky man”. Then, “Better get back to the house.”

Not long after, on another climb, but still not a discernible learning curve, I decided to scat the Charlie Parker solo from “Now’s The Time”, while playing air saxophone. It is a thing. I hit the final cadence and bowed to an imaginary audience, which turned out to be three Dutch girls hiking the Kintyre Way, and so not strictly imaginary at all. Being Dutch, and easily able to outrun me, they took it in very good part.

Though I’ve been venturing further and further up the hill, I’m more usually in my wife’s car when we crest the very top and start the long descent towards town. In the darkening afternoons, and the pervasive wet, we’ve been seeing unprecedented numbers of one of our most welcome winter visitors. They’re glimpsed at the roadside, but this year for some reason in great numbers out on the tarmac, caught in and sometimes confused by the headlights. I couldn’t work out why these birds, and I deliberately haven’t named them yet, should be so much out in the open. So a couple of days ago, I hauled on my boots, took a couple of whiffs of Ventalin and climbed all the way up. My theory was that the birds were looking for easy pickings of molluscs and annelids out on the road surface. I walked along bent double, staring at the pocked surface, not seeing much that a Scolopax rusticola might consider of interest, when I began to experience an all too familiar sensation.

I turned round. Our near neighbour – let’s call her Janine, since that’s her name – was staring at me through the windscreen of her little car, obviously concerned that I had slipped a disc or was having some kind of coronary episode. I I went round to the driver’s window, which I noted remained tightly closed. “Woodcock”” I roared. “Woodcock everywhere!! Have you seen them?” Given that I’m sure she has glimpsed me dispensing deer deterrent around the policies, and possibly misunderstanding the reference, she drove off.

They’re among my favourite birds, cryptic in the extreme, and usually only seen at dusk. Not many birds have their own verb, but the display flight of the woodcock is known as “roding”. We see them in spring, silhouetted down forestry rides and in patches of sky above the road. The male bird has a strange grunting call that you would have thought was mammalian rather than avian. First time I heard it, I thought it was a hedgehog, but hedgehogs rarely fly. Our population is supplemented with wintering birds from Scandinavia. They must be expecting a harsh one this year because I’ve never seen so many.

Until last week, I assumed that they kept pretty much to the high ground but on Tuesday we were watching a treecreeper doing its rounds of the ashes along the burn. Unfailing routine. The tiny bird spirals up the trunk, probing for insects with its needle bill, then drops the base of the next tree and repeats, a neat, economical zig-zag that never varies. Except this day, right in front of the house, he dropped down and flushed a woodcock that had presumably been sitting there since first light, impossible to see against the fallen leaves.

We speculated on the life-cycle of a bird so perfectly camouflaged that, particularly with its eye closed, is almost never seen by day. Only the eldritch stone curlew, also big-eyed but wise enough to keep the peepers shut when people are around, disappears into its background (in its case a Norfolk stubble field would be the most likely) more completely. We’d gone on to talk about and do other things when my daughter came in to say that there was a bird in the house. Usually this means a trapped wren or robin, or occasionally a chaffinch that one of the cats has ambushed. I went through and sitting on the pantry shelf was a full-size and very alive woodcock. Its eyes were wide open and it viewed me with some distrust. I checked it over, and there didn’t seem to be a mark on it. We can only assume that it had encountered Miles or Dizzy, the two black moggies, and played dead with sufficient conviction to be brought inside intact. I left it sitting in the porch for a few minutes, took a couple of proof-of-life pictures, but it was clearly eager to leave us. I slipped it through the open window and off it went, bullet straight for the conifers behind, where it landed, showed me the only daylit woodcock profile I’ve ever seen, and then dematerialised . . . 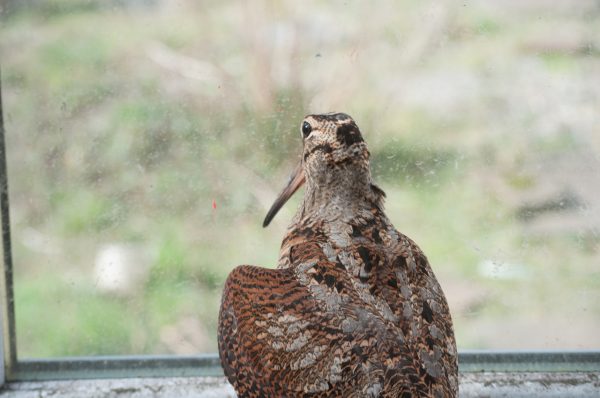