Warning: session_start() expects parameter 1 to be array, string given in /home/customer/www/scottishreviewofbooks.org/public_html/wp-includes/class-wp-hook.php on line 303
 Review: Transcription by Kate Atkinson – Scottish Review of Books 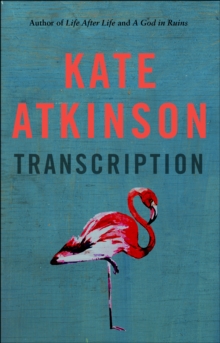 Transcription – the latest offering from bestselling author Kate Atkinson – is a work of complete duality. For a novel that is concerned with spies and espionage, with hidden identities and masked lives, this is perhaps not entirely surprising. Spy novels, after all, abound with duality: characters who are not entirely what they seem, secret double agents, the polarising dichotomy of one side versus another. Transcription’s duality, however, is of another kind: it is the spy novel that is not really about spies.

Juliet Armstrong is eighteen years old when she is recruited into the British Secret Service.  The year is 1940, and the war has not yet properly begun. Both impossibly naïve and unusually worldly, Juliet’s main contribution to war work is the menial – and frequently frustrating – task of transcribing the meetings of a double agent and his loyal band of Nazi sympathisers.

Ten years later, Juliet is working at the BBC, and is continually preoccupied by the past. When a chance encounter with a man she knew during the war leaves her disturbed and inquisitive, she begins to investigate the people that have populated her past lives.

Yet Transcription defies such a neat, simplified description. As you would expect of Atkinson’s complex, almost feverishly layered characterisation, the characters are neither straightforward nor one-dimensional. They are inscrutable, fleeting, removed from complete comprehension – much like the labyrinthine Secret Service that Atkinson depicts with such wit. The novel conforms neither to genre nor expectations; how can it when it is full of the flair that has twice won the author the Costa (formerly Whitbread) Prize?

There is much to like in Transcription. The prose is as confident and self-assured as readers of Atkinson have come to expect. Juliet is a compelling character, and Atkinson’s gift for delivering character traits in a series of pithy observations – ‘He began to read out loud as if it were a script and he a rather poor actor. (She felt sure that he wasn’t.)’ – is in full force. Juliet’s voice is clear, eloquent and pleasingly distinctive, and the tone of the era rings throughout the language in a way that feels both natural and convincing. Compared to the (somewhat exhausting) exuberance of Atkinson’s award-winning A God in Ruins, Atkinson’s delivery of her characters’ numerous idiosyncrasies is quieter, more restrained, and is a tauter, more cleverly constructed narrative because of it. Add in the fact that Transcription is a genuinely entertaining, occasionally suspenseful, rather gripping read, and it has all the makings of a resoundingly vivid novel.

It’s curious why such a fiendishly readable novel feels flat, lacking in some way. But duality is a difficult tightrope to walk. Spy novel and literary fiction. Serious and comic. Plot-driven and contemplative. And it’s a balance that Atkinson – despite some moments of narrative brilliance – does not quite navigate.

The problems are, in some cases, easy to pinpoint. In dual (or multiple) timelines, it’s inevitable that when one timeline – one set of characters or circumstances – is more compelling, the other suffers by comparison. The dynamism, the absorbing quirks of fellow Secret Service employees Godfrey and Perry and Cyril are not replicated in the movements and words of Juliet’s BBC colleagues – Lester and Prendergast and even Daisy, enigmatic receptionist and by far the most memorable character of the 1950 timeline, falter in comparison. Too much narrative is allowed to accumulate between the characters’ first outings and their next appearance; 150 pages, in fact, in which it is easy to forget the jobs, the relationships, the meticulously sketched mannerisms of Juliet’s colleagues at the BBC.

But the discrepancies lie deeper than the mere accrual of pages. One of Transcription’s most persuasive, diverting traits is its comedy. This is a novel that does not take itself too seriously. Laced with brilliant, wry humour and laugh-out-loud farce, the novel is never far from a comedic moment. Clever character observations sit alongside skilfully executed running gags. ‘Can I tempt you?’ Juliet is asked on several occasions, unclear whether her interlocutor is merely being polite or whether they are, in fact, British Secret Service agents hopelessly trying to reveal themselves. When considering a Nazi sympathiser who is under surveillance, Juliet muses to her boss Perry that ‘if it weren’t for her rabid anti-Semitism or her worship of Hitler, they might have got on. (Quite big ‘ifs’, Perry pointed out.)’

Atkinson’s perpetually droll, crisp humour is a real joy to read; in contrast to the more muddled, eclectic comedy in A God in Ruins, it’s clear that she has honed her craft and become blunter, quicker, more pointed in her aim. Detailed, concise and lovingly painted sketches of the characters’ various eccentricities hint at lives lived beyond the edges of the narrative: ‘Mrs Ambrose was, by her own admission, ‘something of a clairvoyant’. She claimed it was a God-given skill so it was compatible with her Christian beliefs.’ Juliet’s obsession with Perry seducing her – of whisking her away to a country getaway for a weekend of sordid passion – is, of course, the stuff of dreams, but the moulding of Perry’s character is beautifully done, a layered personality full of fears and briskness and contradictions. This joyful characterisation is a suitable accompaniment to Juliet’s own wit, her perpetual sense that everything is ‘a bit of a lark, something from Buchan or Erskine Childers.’

But then it suddenly becomes obvious to Juliet that everything is not a bit of a lark. It is not a glossy story copied from ‘a Girls’ Own adventure. The Russian Tea Room, the stickering, the escape down the Virginia creeper.’ It is a realisation that ostensibly makes her rethink her careless attitude towards her life as a spy, a realisation that still remains with her ten years later. For Transcription, however, that same realisation never quite arrives. The sudden shift in seriousness, in the fact that Juliet’s actions now have consequences, is told rather than shown, displayed rather than felt. Do Juliet’s actions really have consequences? Does she really rethink her blasé attitude? Her behaviour does not change; her outlook remains just as irreverent ten years down the line.

The pervading sense of fun – of everything being ripe for a joke – is what makes Atkinson’s work so compelling. Losing it would, in a way, be to lose the essence of Atkinson’s writing, and would certainly detract from the power she has of keeping the pages endlessly turning. A God in Ruins manages to wed this sense of perpetual amusement with a moving understanding of the passage of time – amongst descriptions of death, life and bombs falling upon Cologne, it is possible to catch a glimpse of real beauty, a sense of lives being lived. But in Transcription this permanent sense of fun seems rather out of place; it clashes and undermines the ideology and the belief in ‘this England’ – a patriotism to which Juliet is arguably inextricably committed – that this book claims to deal with.

So much feels unfinished, not quite realised. The plot twists, when they come – and they do – are unconvincing. The earnestness, the ideological implications, which they imply, seems unsubstantiated by the characters’ earlier motivations. Rightly so, there is no ‘Agatha Christie’ moment: no abrupt slotting together of narrative nuts and bolts, no realisation that everything suddenly makes sense. Atkinson’s literary novels are not known for their clean-cut endings or easily digestible plots. But even amongst the vivid complications of Transcription, the final feeling is still one of closure denied.

Upon reaching the end of this baffling ‘spy novel’, there is a sense of narrative potential being lost. Such stringent ambiguity might, of course, be deliberate – an attempt to foil the reader’s expectations – but Transcription is not a novel characterised by thought and the inner workings of the mind. Despite its flamboyance, it is still a novel that employs intrigue, suspense; that relies on the machinations of unknowable characters and the sense of a lurking secret hidden at the heart of the narrative. Juliet behaves like a spy: she ferrets out information, conducts her own investigations, attempts to discover why everything is not entirely as it seems. To produce such an ending, then, such a disheartening plot twist, seems to rail against the nature of the book that Atkinson has been striving to create.

Transcription is certainly a book that is difficult to put down. It is compelling and absorbing and easy to devour, a rare feat for an author with such literary pretensions as Atkinson. But it does not convince, does not grab quite like her previous literary output. It is a book that is well worth reading but it is not, perhaps, the finest example of Kate Atkinson’s colourful worlds.

Rachel Walker is a member of the SRB’s 2017-2018 Emerging Critics Programme. Transcription is published on 6th September 2018.