Warning: session_start() expects parameter 1 to be array, string given in /home/customer/www/scottishreviewofbooks.org/public_html/wp-includes/class-wp-hook.php on line 292
 Notebook: In Scott Country – Scottish Review of Books 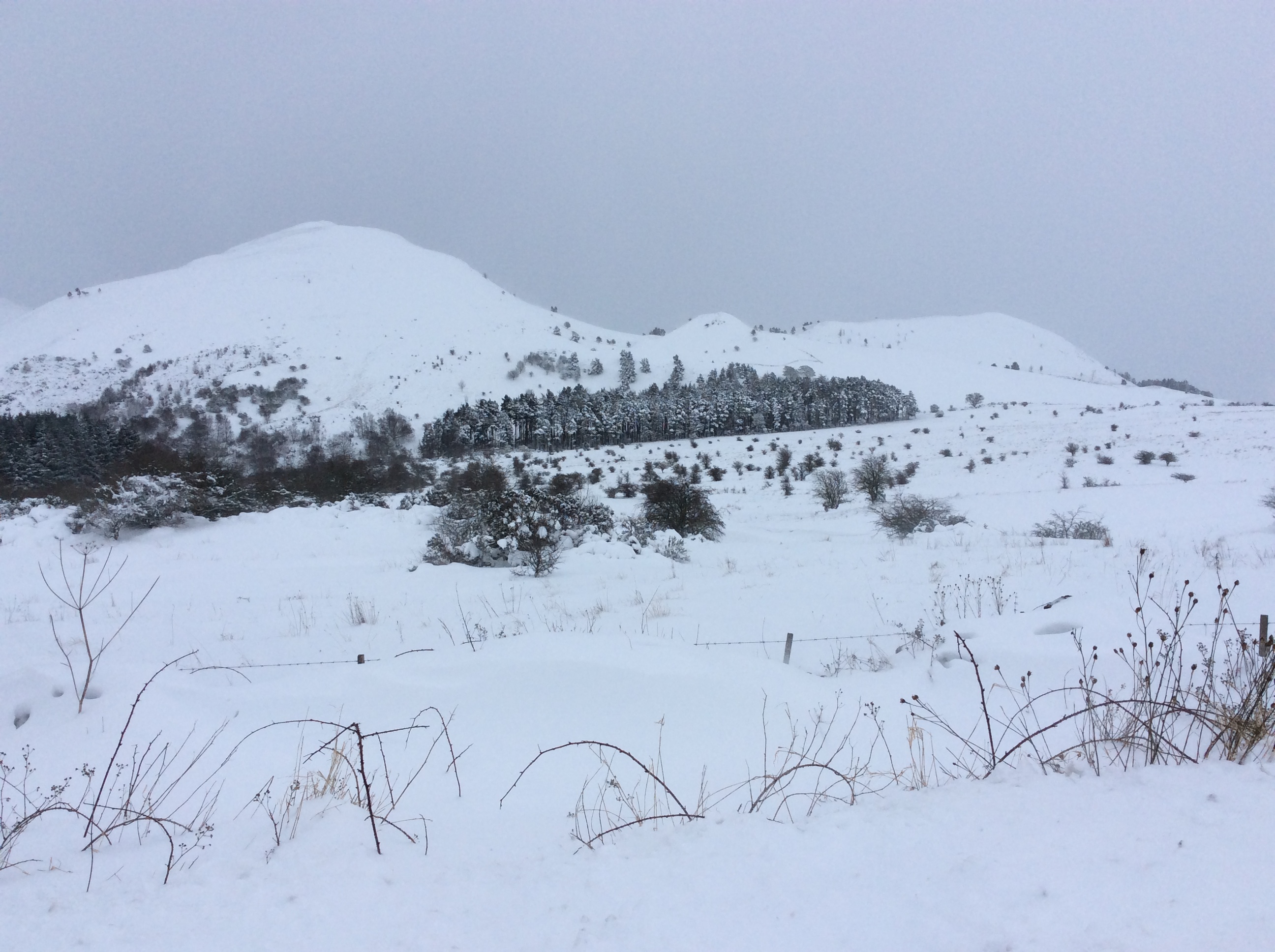 AS the train from Edinburgh pulls out of Galashiels and inches across the River Tweed on the way to its final stop at Tweedbank the Eildons rise like soufflés in the distance. Consisting of three hills, the highest of which, the banally-named Mid Hill, is just under 1,400 feet, they are the most familiar sight in the Scottish borders. Seeing them, my heart swells for I know that I am almost home. At this point in the hour-long journey I sense a tenuous kinship with Sir Walter Scott who, as his son-in-law, John Gibson Lockhart, records in his stirring biography, ‘exclaimed with delight when the well-loved Eildons came into view’. Scott was then – the summer of 1832 – a dying man and too infirm to venture on to the hills he had tramped often throughout his life. But memories of rambling remained with him to the last. Guests at Abbotsford, the pile he built even while writing feverishly to pay off his debts following the collapse of his publisher, were expected to accompany him on what he called ‘excursions’ but which to many seemed more like route-marches. Some of Scott’s friends, such as the scientist and inventor, Sir Humphry Davy, preferred to take a rod and try their luck on the fast-flowing Tweed while the more athletic sought to spear salmon. Others chose hare coursing and would invariably find themselves thrashing through thickets of wiry heather or stuck in a peat bog. For those disinclined or unable to hike Shetland ponies were provided. As Lockhart ruefully remarked, ‘There was nothing slack-lipped in Scott’s geniality’.

My wife and I moved to these parts two Decembers ago, having spent countless days searching for a rural retreat. The fact that I can’t drive – a curiously common trait among Scottish writers – was one complicating factor. Another was the need to be able easily to commute to Edinburgh and its libraries. A pub would have also have been an attraction but it was not a deal breaker; I have spent too many hours in the sole pub in a backwater town having my ear bashed by its resident wiseacre. The reopening in 2015 of part of the Waverley line, which had been in existence for more than one hundred years before it fell victim to cuts instituted by Lord Beecham in 1967, could not have been better timed since it brought the capital within reach of one of the most under-populated and overlooked regions of the country. We spotted the cottage in which we now live online while on holiday in Italy, little expecting it to be still on the market when we returned. That it was suggested our luck was in. It was love on first viewing. Though there is no pub in the village in which it lies it offered untrammelled access to the Eildons. Were Scott still around he could drop down from the hill, cross a grazing field, and into our garden for refreshment.

My mother was a borderer. She hailed from the former mill town of Hawick, beyond which few of the fervently tribal natives ever thought it necessary to venture. Why her parents left I was never told or if I was I have long forgotten. Perhaps they realised that the demise of many of the tweed mills, on which the town’s prosperity was based, would arrive sooner rather than later. When I was a boy, however, Sundays were often spent visiting relatives or simply going for ‘runs’ all across the Borders’ near empty roads in my father’s car, a secondhand Ford Anglia. There was no avowed purpose to these outings but the destination was never in doubt. By late afternoon we would pull up at the Gordon Arms Hotel – an old coaching inn in the Yarrow Valley whose clientele included Scott, James Hogg, and, more speculatively, Robert Burns – for ‘high tea’. My bible, Chambers Dictionary, defines this rather dully if accurately as ‘an early evening meal comprising a hot dish followed by cakes, etc and tea’. The hot dish was breaded haddock and chips with a few fresh garden peas offered by way of decoration. Even now I can hear my mother telling me to ‘eat up every last one’ lest I suffer nutritional deprivation. 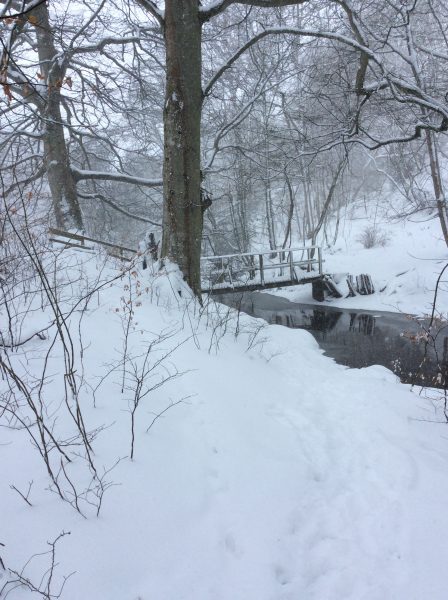 What we never did much of was walk, which I rather regret. Given my inability to drive, I walk by necessity and for the sheer pleasure of putting one foot after another. When I was a member of the Boys’ Brigade, I was introduced to hillwalking and spent many weekends roaming the Pentland Hills. These were claimed by Robert Louis Stevenson in his book, Edinburgh: Picturesque Notes, published in 1879 when he was twenty-one. The Pentlands, with their colourful history was – in the view of Ian Bell, one of Stevenson’s several biographers – ‘the backdrop to his imagination’. His base was the village of Swanston where for several summers his father took a lease on a cottage. It was not far from Edinburgh but even in RLS’s day urban sprawl was beginning to encroach on the sheep-speckled hills. His solution to this blight was simple if extreme: ‘As Lord Beaconsfield proposed to hang an architect by way of stimulation, a man, looking on these doomed meads, imagines a similar example to deter builders; for it seems as if it must come to an open fight at last to preserve a corner of green country unbedevilled.’ What Stevenson would have made of the dilapidated, rust-riddled caravan in which we BBs overnighted one can well imagine.

Such unspoiled corners, however, are increasingly hard to find as my wife and I discovered. In that respect we feel fortunate to have come across somewhere that – fingers crossed – is largely unspoiled. The village has approximately two hundred people, the majority of whom are retired though of late there has been a more youthful influx. It is in a conservation area which means that any alterations and proposed new buildings must meet strict planning guidelines. To its north lie the Eildons – ‘three crests against a saffron sky’, as Scott wrote – while to the south roll the Cheviots for as far as the eye can see. In the past these prominences were most useful for foretelling the approach of foes, chief among whom were the English who were forever trying to quell their noisy neighbours. The fields that surround the hills, their boundaries often marked with dry-stane dykes, are generous and, by September in the process of being harvested, the reassuring drone of combine harvesters heard long into the evening. I am reminded of the opening sentence of In Cold Blood and “the high wheat plains” of western Kansas. The plains here may not be as broad as those Capote described but the views across them are likewise ‘awesome extensive’. Sheep remain the predominant animal but there are also horses, this being fox hunting terrain, and cattle aplenty, including a herd of Galloway belties. One day, returning to the village by car, we were stopped in our tracks by a bull the size of a 4X4 accompanied by his harem of four caramel-coloured heifers. There was no question of him giving way so we sat and waited until a fellow villager arrived and told him, in a manner which brooked no contradiction, that he had no business blocking a public highway. ‘You’ve got to speak to them authoritatively,’ she said. When one of the heifers took executive action and leapt like a steeplechaser over a hedge the bull reluctantly followed. Nothing ever happens hereabouts we were told but things like this are happening all the time. On my afternoon rambles around the Eildons I usually meet an assortment of dog walkers, fell runners and pilgrims doing the St Cuthbert’s Way, a sixty-mile trail opened in the 1990s which starts at the ruins of Melrose Abbey and goes via Dryburgh Abbey, where Scott is buried, to Lindisfarne. This recreates a journey St Cuthbert is believed to have undertaken in the seventh century. Some pilgrims take their walk more seriously than others. One I encountered, who bore more than a passing resemblance to John Lennon, was doing it barefoot, surely a definition of masochism. He was doubtless sleeping rough, eschewing the temptation of a hotel meal, a muscle-soothing bath and a warm bed. Near the end of the trail, however, he could look forward to seeking shelter in St Cuthbert’s Cave where, according to legend, monks carried the saint’s body to prevent its seizure by raiding Vikings.

I have no desire to follow in anyone’s footsteps other than the wildlife – deer, foxes, badgers, hares – that only make themselves apparent when I stand motionless. Hawks circle in search of an early evening snack and grey squirrels crack twigs in their haste to disappear. Clambering up Mid Hill I imagine Scott doing the same, the much younger Lockhart struggling to keep pace with his athletic elder. The Wizard of the North may be less read today but in these parts he is remembered with familial reverence. He is one of theirs, a character from their history, a good man, his memory preserved in the names of countless streets, shops, restaurants and small businesses. Within an hour or so of leaving our cottage I stand atop the Eildons and as I catch my breath I read the plaque on the stone plinth: ‘In memory of Sir Walter Scott: “From this spot he was wont to view and point to the glories of the Borderland”.’ 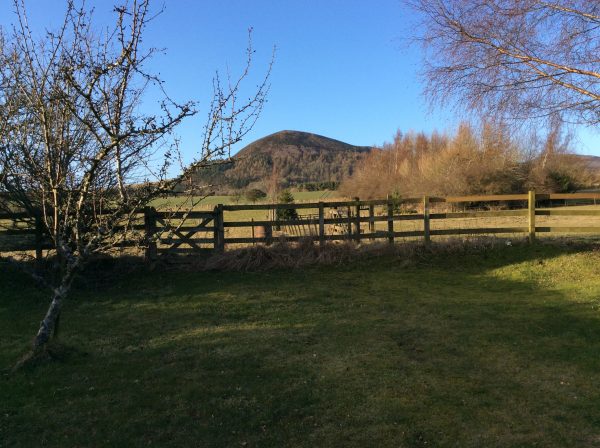