Kapka Kassabova was announced as the winner of the inaugural Highland Book Prize at the Ullapool Book Festival on 12th May. Her book, Border: A Journey to the Edge of Europe (Granta), is an exploration of the borderzone between Bulgaria, Turkey, and Greece, once a heavily guarded line between east and west. The judges praised its “personal and intellectual bravery” noting Kassabova’s especial skill in relating individual stories to broader historical narratives as she unfolds a portrait of a land rich in history, folklore, and conflict.

Speaking from New Zealand in a specially recorded video message, Kassabova said, “[The Highlands are] a place whose very mention makes people around the world acquire a dreamy look – in other words a place that is imaginatively charged, but often subjected to cultural cliché and that is why I think it is so important to encourage those dimensions of Highland culture that go beyond the cliché. Border would have been a very different book had I not become a resident of the Highlands seven years ago. Living in the Highlands attuned me to the precious fragility of our natural environment …..The periphery is often sacrificed for the interests of the centre. Geographically remote areas have different frequencies of less told histories, less heard voices”.

Kassabova, who was the subject of the SRB Interview in February 2018, will donate half of the money she will receive from the prize to the Scottish Refugee Council. Border has garnered acclaim across literary prizes: it was the Saltire Society’s Scottish Book of the Year 2017 and won the Stanford Dolman Prize for Travel Book of the Year as well as being shortlisted for the Baillie Gifford Prize for Non-Fiction and the Gordon Burn Prize.

The judges for the £1,000 prize were Jenny Niven, Head of Literature, Languages and Publishing at Creative Scotland, Alex Ogilvie, trustee of the Highland Society of London, and authors Kevin MacNeil and Chris Dolan.   MacNeil commented, “The ultimate triumph of Border is that it removes all our borders. It reminds everyone of our innate love, decency and empathy for our near and our more distant neighbours. The reader emerges from this book a better informed, more empathetic and more worldly-wise individual. Border is destined to be a modern classic”.

The three other shortlisted titles were The Potter’s Tale, by Dion Alexander (Birlinn), a memoir of life on Colonsay in the 1970s and 80s; a novel, The Angel in the Stone by R.L.Mckinney  (Sandstone Press), which tells the story of a family confronting buried secrets; and The Finest Road in the World by James Miller (Birlinn), a history of transport and travel in the Highlands and Islands.

The Highland Book Prize was established in 2017 and is open to work in fiction, non-fiction, and poetry. It is presented by the Highland Society of London and facilitated by the Moniack Mhor Creative Writing Centre in partnership with the Ullapool Book Festival. 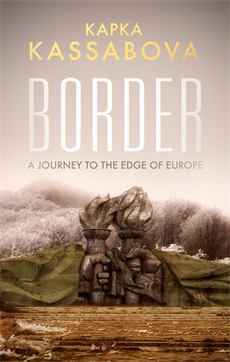