Warning: session_start() expects parameter 1 to be array, string given in /home/customer/www/scottishreviewofbooks.org/public_html/wp-includes/class-wp-hook.php on line 307
 SRB DIARY: IN SEARCH OF GERMAN ANCESTRY – Scottish Review of Books 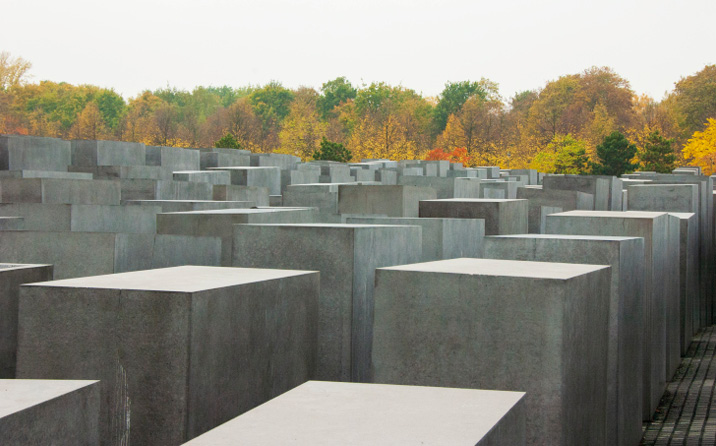 Before I travelled to southern Germany earlier this year for a writing residency I was under the happy illusion that I was a half-decent hill walker, but here I am staying in Dilsberg, a tiny village perched on a hill so steep that I repeatedly have to lure myself up with promises of coffee and cake at the top.

Dilsberg is only about fifteen kilometres east of Heidelberg and yet I feel very remote from the rest of the world. This is partly because of the forest, a dense and dark mixture of oak, birch and pine trees which covers much of the land as far as I can see. Germany has about twice the forest cover of Scotland, this is not a landscape I’m used to. But my family would have been, in the past. My grandfather came from Offenbach am Main, not far from here, and one of the purposes of my residency is to visit that town and find out about his early life. I don’t know much more than he emigrated (or immigrated, depending on your viewpoint) to England in 1938 and after war broke out, he was interned on the Isle of Man (as were practically all male German refugees).

One of the other internees was the artist Kurt Schwitters. Before he was forced to leave his native Hanover, Schwitters came up with the idea of ‘Merz’, apparently deciding on this nonsense word when he saw a discarded scrap of paper with the words “Kommerz und Privatbank” on it. He tore the paper into pieces to create ‘Merz’ and used this to signify a piece of art that is also rubbish, a thing with two complementary, or contradictory, meanings. Schwitters’ rubbish-art feels like an apt precursor of post-war Germany, when the Trummerfrauen (rubble women) were ordered to sort through the chaotic remains of bombed cities and assemble piles of bricks and stones. (The men were largely absent, either dead or injured, or in POW camps.) This rubble was then used to help reconstruct the destroyed buildings. I wonder if this recreation of the past was a physical expression of a collective desire to wind the clock back to pre-1933. It certainly gives the oldest and most picturesque parts of many German cities an ersatz sensation, or even a slight uncanniness when you realise the ‘medieval’ townhall you’ve been admiring is actually constructed of debris glued together with decidedly twentieth-century concrete. But if we forget and allow ourselves to believe these buildings really are medieval, then the modern re-makers have done their job well and erased themselves entirely from their cityscapes.

Actually, Offenbach is somewhat different. The centre of the town is a modern pedestrianised centre that reminds me curiously of Inverness. I come here in an optimistic belief that I will be able to sense something of what my grandfather experienced, and more prosaically to see what has become of the family bank founded in 1832 by my grandfather’s grandfather, Sigmund Merzbach. I have an address for the bank, but when I get there I realize I am gazing at the sky where there should be bricks and mortar. The bank is now an empty lot, a wide gap between two shops in an otherwise busy high street with nothing at all to indicate what was once here. On my return to the station I discover a small hat shop, and propped up in its window is a handwritten sign advertising a knitted hat as having been made in ‘West Germany’. I am not sure if this sign is actually (at least) 28 years old, or if West Germany is still an ongoing state of mind for hat sellers and buyers in Offenbach.

It’s a relief to reach the forest surround-ing Dilsberg, where I have developed a habit of walking the same route every day in an attempt to make this place my home, no matter how temporary. I think I’m succeeding when I no longer need to check my map every few minutes. At least, I feel at home until I’m warned by the locals not to walk at night-time because of the wolves which are spreading into Germany from the east (this appears not to be a metaphor but an actual fact) and have – allegedly – been seen in people’s gardens. I rather like the idea of encountering a wolf, but am secretly glad this never happens.

Dilsberg has its own mini-Flodden wall. An old wall mended on a regular basis, but that nevertheless earns its right to be called old. It entirely circles the village apart from the house in which I live and work, which is named the Kommandantenthaus after an earlier tenant, the Commander Tilly, leader of the Catholic counter-reformation forces during the Thirty Years War. The house is large and breaches the wall. So, as I sit and write in my flat on its top floor, I am neither in nor outwith the village, but perhaps occupying a gap between these two physical states.

In March I visit the Leipzig book fair to take part in some readings and panel discussions. This fair is huge with thousands of exhibitors, publishers and visitors but everyone I meet assures me it’s much smaller and more intimate than Frankfurt’s. In one of the five halls (each as seemingly large as an aircraft hanger) is a clump of publishers, physically separated from all the others and surrounded by security guards. These are extreme right-wing publishers who have insisted on their legal right to be here. When I walk past to get a surreptitious look, the stands look disturbingly like the others elsewhere, they’re busy with people looking at the books and chatting with the publishers, and the guards are looking bored. It’s a crime in Germany to deny the historical truth of the Holocaust so the magazines they publish try to chip away at it obliquely by crawling over the facts in an attempt to find something they can claim is inconsistent or falsified. One publisher’s stand is covered in flattering pictures of Putin, it’s not hard to guess who might be bankrolling them.

The other publishers at Leipzig aren’t taking the inclusion of these rightwing press lying down. They’ve formed a movement called ‘Verlage gegen Rechts’ (publishers against the Right) and have organized a series of public panel discussions about the importance of protecting democratic rights and in particular the rights of minorities. I’ve been invited by this movement to take part in a discussion about physical memorials – particularly those of the Holocaust – their purpose and meaning in modern Germany, and the way they help Germans to remember the past. My inclusion on this panel is partly triggered by a statement made about the National Holocaust Memorial in Berlin by the director of Alternativ für Deutschland (the extreme right-wing party that since the 2017 federal election is now part of the opposition in the Parliament), that Germany is the only country which is required to have this ‘memorial to shame’ (sic) in its capital. I’ve visited the memorial in Berlin several times. The vast field of grave-sized blocks feels appropriately sombre and heavy and yet it’s also rather anonymous; actual information about the Holocaust is physically separate from the memorial, and it’s common to see weary tourists eating ice-cream while sitting on it. Nevertheless, a national memorial to the victims of genocide right in the heart of its capital and only metres from the Reichstag Building is a telling indication of how seriously Germany takes its responsibility to remember its past crimes. I tell the audience that it’s not a ‘memorial to shame’, but rather a memorial to historical truth that other countries such as the U.K. would do well to emulate.

Memorials here are deemed to be a collective response to a collective crime and our panel at Leipzig book fair is in agreement that they are necessary, but that separate voices should also be heard through the medium of literature, which is better suited to bearing the variety of individual testimonies. Too late after the event, I realize that our discussion assumed that the future people of Germany (whom we all agreed should continue to bear a responsibility to look after these memorials) will have a direct connection to the past. But of course many Germans are immigrants, or the children of immigrants. Should they feel any obligation to the victims of history?

All the hotels in Leipzig are full so we stay in Halle, a town about twenty kilometres away. Halle is famous for its ancient salt works (its name derives from halen, the Celtic word for ‘salt’) and the Roman saline is now a museum. Presumably this is a popular tourist attraction around these parts but the ‘beast from (even further) east’ has descended on us and the city is struggling under a sudden thick layer of snow. On one day the trains have stopped running and I can’t get to Leipzig so I try and do some sightseeing around Halle, before giving up and returning to my comfortable hotel in one of the most Soviet-era neighbourhoods I have ever seen in the ex-DDR. The expanses of snow and ice around the concrete housing projects only add to the Cold War atmosphere.

After all this I am keen to escape back to the present day. But I have my own personal memorial that is reinforced by the language here. In German, ‘Merz’ is a homonym of ‘März’, meaning March. Several years ago my mother died in the middle of the month. The days just before the anniversary of her death always feel like a gap in normal time, during which I find it difficult to concentrate on work. It seems like all I can do is hold my breath and wait for normal life to return. Every year as March approaches, I hope it will be a different experience and that the gap might have closed up, allowing me to live through the month as if it were like any other. But by now I have learnt that after a bereavement nothing ever goes back to what it was, and I spend these days walking and listening to birdsong in the forest, and keeping an eye out for the imaginary wolves.