Warning: session_start() expects parameter 1 to be array, string given in /home/customer/www/scottishreviewofbooks.org/public_html/wp-includes/class-wp-hook.php on line 303
 POET AT WAR – Scottish Review of Books

Alastair Reid: Galloway was his Eden 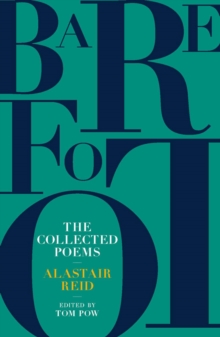 EDITED BY TOM POW (GALILEO PUBLISHING) WILL BE PUBLISHED IN AUGUST. THE BOOK WILL BE LAUNCHED AT AN EVENT WITH TOM POW AT THE EDINBURGH INTERNATIONAL BOOK FESTIVAL ON 14 AUGUST AT 6 P.M.

The naturalist and journalist, Michael McCarthy, comments in his book The Moth Snowstorm – Nature and Joy, on the luck of coming from a ‘special place’; as lucky, he thinks, as coming from a happy family. McCarthy’s ‘special place’ was the marshland of the Wirral; Alastair Reid’s was Galloway, where he was born, ‘in the warm south-west, a gentle, kindly beginning, for we were bound by the rhythms of the soil…’

He describes Galloway here (‘Digging Up Scotland’) – or his portion of it around Whithorn – in Edenic terms, and it remained for him a touchstone, as the tiny island of Wyre in the Orkneys was for Edwin Muir. Both were cast out early from their Edens, but, in ‘Digging Up Scotland’, Alastair writes that ‘the landscapes of childhood are irreplaceable, since they have been the back drops for so many epiphanies, so many realizations.’

Alastair was cast out to Selkirk in the Scottish Borders. His father, a Church of Scotland minister, had accepted a charge there, in 1931, when his son was starting school. For a man, one of whose main themes as a writer was change, it was ironic to be living in a place where a parishioner once told his father, ‘We’ve tried change and it doesn’t work!’ Alastair found the democratic ‘land-life relations’ of Galloway replaced by a deference that made him uneasy; a growing awareness of how Calvinism snuffed out joy. Perhaps, part of the attraction of St. Andrews as a university for him was the coastal situation and the human scale. Certainly, the town (though not ‘The Academy’), and more especially the East Neuk, became another of his ‘special places’. As it became mine. In fact, I was a student there when the census-taker knocked on Alastair’s rented house outside St. Andrews to be answered by the blind Argentinian fabulist, Jorge Luis Borges. I didn’t meet Alastair at that time, but over the years we met and talked often – in Edinburgh, in New York, in the Dominican Republic, where he lived for some years, and in the ‘warm south west’, where he and his wife, Leslie Clark, came each spring and to which Leslie still does.

His studies at St. Andrews, in Classics, were disrupted by the war. He describes his experience of the war as an interruption to the natural ‘flow of time’. In ‘Hauntings’, he writes ‘…forgetting made the war much easier to survive than remembering. It scarcely arises now, either in memory or in dream, for I have instinctively enclosed it in a warp outside real time. It makes no more sense in the memory than it did in its nightmare reality.’ I never heard him make reference to the war, apart from the fact that he was glad it ended when it did – he had no desire to have it prolonged by the Japanese. Leslie has furnished me with an account of his war years. He was in the Royal Navy, from the age of seventeen — first on a mine-sweeper in the Irish Sea — then on what is called a Sloop in the Indian Ocean. Home port was Colombo in Ceylon/Sri Lanka. He was an able seaman, then became a lieutenant and a cipher clerk. (Cipher clerks had their own office.) In August of 1945, while in the South Moluccan Straits, he decoded the message: ‘Cease all offensive operations against the Japanese.’ It was repeated several times and his ship was then ordered into Singapore. It was the first Royal Navy ship into Singapore. After the war, his ship was ordered to ‘show the flag’ in Basra. He didn’t get home until 1946.

Back in St. Andrews, the atmosphere was febrile; there was lost time to be made up, an impatience to resume ordinary lives. One ex-army Captain, Alastair told me, visited his lecturer before exam time, pistol in hand. The message was along the lines of, ‘Look, we’ve wasted enough time already. Give us the exam questions or I’ll blow your brains out.’

Alastair was also in a hurry. In 1949, he had 12 Poems printed privately. They are, for the most part, the poems of a young man catching up on a young man’s pursuits – falling in love, being love-lorn, the poet’s words mocked by the ‘troubled touch of time’. There is a Georgian elegance about these particular poems, but little to suggest that Alastair would go on to become such a memorable poet concerning the transforming power of love – and of its demise. The 12 Poems are not his first published poems; five poems appeared in Scottish Student Verse 1937-1947 with an introduction by Eric Linklater, stating that, ‘The newest poets in the Scottish universities have not shrugged off their experience of war, but keep it to live with; and a consequence of their bitter association is that these pages offer more than “university verses”. They sometimes offer poetry.’ This short poem, ‘Torchlight Procession’, appears in both Scottish Student Verse and 12 Poems:

Along the way the torchlit column goes

wildly. And watching, I remember those

who marched along with me to the last sad turning.

They bore no torches, but their hearts were burning.

Nevertheless, true to his word, his war experiences as material for his poetry remained unknown, ‘closed in a warp outside real time’, for me at least, until I began the work of editing his collected poems, starting with his archive at the National Library of Scotland. There, I discovered that 12 Poems is partly drawn from a series of over fifty poems, the majority unpublished, which bear the cover sheet, ‘Poems’ at the top and at the bottom, ‘Alastair Reid, St. Mary’s Manse, SELKIRK’. The folio is not dated, but the subject matter, and the fact that his father left Selkirk to take up a charge in Holywood outside Dumfries in 1948 when Alastair Reid was 22, lead me to believe the poems were written roughly between the ages of seventeen and twenty-two. Many of the poems touch on his war experiences, outlined by a single sentence in ‘Hauntings’: ‘When I joined the Royal Navy, in the later years of the war, I was projected abruptly out of Scotland and to sea, on a series of small ships, around the Indian Ocean – endless ports of call that were all astonishments.’ Several of the poems draw directly on place – ‘To Arab Boatmen, Heard Singing on the River’, ‘Dhows Passing’, ‘For An Indian Lady’. For works such as these and others, there might have been a place in an afterword section of juvenilia – a traditional site for early flawed poems of interest. But this would be to do a disservice to a grouping of poems among them that are powerfully achieved, poems that show remarkable gifts for understanding the relationship between form, tone and meaning. These are poems worthy to include in the main body of his work, as poems in their own right and as a vital part of his development as a writer. It is several of these that are published for the first time in the SRB.

The most successful poems concern a more reflective response to his experiences. These press against the tight forms he chooses, as in the sonnet, ‘Travellers’ Tales’, whose ending echoes ‘Dulce Et Decorum Est’:

Child, do not listen. I will tell you stories

of these far off lands, and dim your dreaming joys,

children who dream as you, but have
for toys

hunger and pain and blood, tears and death.

Nor is it by accident that his poem, ‘The New Way’, should carry echoes of Edward Thomas (and Thomas’ mentor, Frost). For the First World War was present in the experience of his household. In Notes to ‘My Father Dying’ in the NLS, Reid writes, ‘His [father’s] wound from World War One had kept him from ever being strong. A few years ago, on his eightieth birthday, he gave me the bullet which had been removed from his chest, and which he had kept as a talisman of a kind.’ In fact, there is an undertow of the past throughout these poems that is unusual in Reid’s work, as in the opening lines of ‘Call Back The Days’:

Call back the days, the heedless happy days,

the winter-white delight, the summer joy,

the light forgotten laughter of the boy,

After the war, however, there is a determination not to be caught up in the shadows of the past: the direction of travel will be through time, not back in time. In ‘Poem for My Father’, in his first full collection, To Lighten My House, he will write, ‘I choose to achieve spring, to work against winter.’ Again, much later (1975), among the notes to his draft of ‘My Father, Dying’, he writes, ‘I decided early/ to make my own fate, not assume the one that weighed on Scotland.’

To Lighten My House was published four years after 12 Poems. Yet the difference in tone and in ambition from the earlier gathering is significant. There is a spreading of wings here – a delight in exploration and in new-found freedoms. Part of this can be explained by his recent experiences of post -war New York. He writes to his friend, John Main, from Iowa in 1949:

‘This America is something.

New York has all the excitement of tall buildings and a kind of magical atmosphere. I met hundreds of delightful people, wrote some things and generally lived in all senses, stimulated, intrigued, fascinated, interested and sharpened…’

However, I think the advance cannot be explained only in geographical terms; but rather by an appreciation of the craftsmanship evident in the strongest of his early poems. The best of them are tense and muscular, dependent on individual, lived experience in a way that 12 Poems are not: the latter feel like the work of a poet relaxing into experiences he has been denied, following in the grooves already made for him. It is the poems he ignored which show of what he was truly capable and so, in a Collected Poems, they are the place to start reading.