Warning: session_start() expects parameter 1 to be array, string given in /home/customer/www/scottishreviewofbooks.org/public_html/wp-includes/class-wp-hook.php on line 292
 Wells of Holiness – Scottish Review of Books 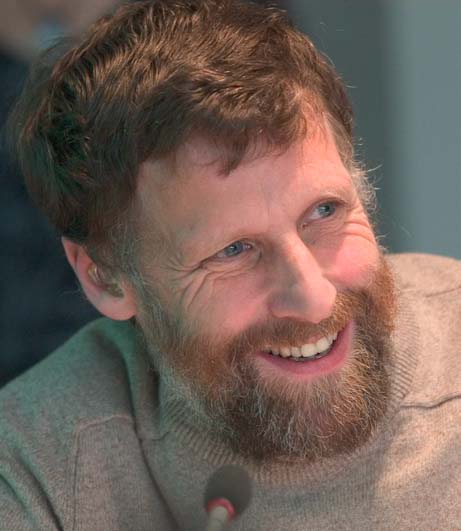 MARTIN Luther hated pilgrimages. He wanted them stamped out – for the common people at least, because they encouraged ‘a vagabond life’, although he made an exception for the nobility. They would still be allowed to travel, he decreed in 1520, but not for any spiritual purpose – only ‘out of curiosity, to see cities and countries’. Tourism, in other words. Alastair McIntosh’s latest book, Poacher’s Pilgrimage: An Island Journey, has a title that hints at a vagabond life but has a spiritual purpose too. A meditative and discursive account of a 12-day hike across his home island of Lewis, it was planned as a pilgrimage to its ‘sacred sites’ – its beehive shieling huts (some of which have been standing for two millennia yet remain firmly off the tourist path) and its similarly neglected pre-Reformation chapels and holy wells. It is also a journey into McIntosh’s own past, and his early 1960s childhood, the son of a doctor at the North Lochs practice, midway between Stornoway and Harris, is lyrically described. Though he now lives in Govan, he still thinks of Lewis as home, and treasures that part of island life which still holds out against anomie and materialism.

Growing up in Leurbost, McIntosh writes, he was surprised to discover in his teens that there was indeed an academic subject called ‘human ecology’ – surprised because everything it said about how man should work with nature was already the Hebridean way of doing things: it was just commonsense that the seas shouldn’t be overfished nor the land overgrazed. As someone who went on to set up Britain’s first MSc course in the subject at Edinburgh in 1990, McIntosh is being disingenuous. He knows – and even the university authorities, who controversially closed down the course in six years later, would agree – that there’s far more to it than that.

Without revisiting the stushie in detail, it’s perhaps worth pointing out that other courses in human ecology – a subject one would have thought more relevant than ever at a time of climate change and environmental depletion – were also scrapped in Hull and Brussels, though he was able to resurrect his course, now validated by the Open University, at the Govan-based Centre for Human Ecology. In a 2012 paper, he offers a succinct explanation for the vicissitudes his chosen subject has faced: ‘Once it moves beyond the relatively safe confines of population, resources, environment and development, it runs up against iceberg-like structures of money, power and epistemology which are largely invisible until struck.’

What the Academy also finds hard to understand about McIntosh’s brand of radical human ecology is its tendency to critique subjects such as land reform and climate change from a pre-modern and spiritual rather than post-Enlightenment and utilitarian point of view. In both Soil and Soul (2001) and Hell and High Water (2009), he brings a dimension of spirituality to debates usually conducted in purely materialistic or utilitarian terms. To McIntosh, pressing for community empowerment (as in the Eigg buyout and the Harris superquarry campaign, in both of which he played a leading role) is, like challenging the consumerist mindset that underpins climate change, just part of a wider battle against spiritual disconnection.

As recently as the 1970s, a friend who worked in the old Lewis Hospital in Stornoway told him, the main fridge used to be stocked with lemonade bottles labelled with the patient’s name, and containing water from their favourite spring or well to aid their recovery. In subsequent decades, that custom died away and many wells became overgrown. On his pilgrimage, McIntosh sought these out, and wherever possible, opened them up. Metaphorically, he is doing something similar to the island’s history, especially its religious history. He wants to reach behind the Calvinism usually associated with the Lewis to the pre-Reformation religion of saints and wells, contemplation and indeed pilgrimages.

Pushing past the ‘cosmic apartheid’ (the Elect versus the Damned) of Lewis Calvinism, McIntosh finds himself on the kind of island in which he is even more spiritually at home, where the concentration of sacred sites is ‘almost without parallel elsewhere in Britain’.  Whether the word ‘Hebrides’ is itself rooted in Eileana Bride (the islands of St Bridgit) there is no doubt that the whole of pre-Reformation Harris was once known as the parish of Kilbride (from cille, church or hermit’s cell, of Bridgit), and McIntosh’s pilgrimage across the island stops at several sacred sites devoted to the saint who has been called ‘the Mary of the Gaels’, the patron saint of poets, healers and blacksmiths who, in the Irish tradition at least, ‘turned back the streams of war’. It doesn’t matter that some of the sites devoted to Bridgit have sunk back into nature, or that their fallen stones are lichen-covered and rounded, that the shielings and wells are hardly recognizable any more. To McIntosh, that’s almost the point. ‘The less there is to see, the holier a place it be,’ he tells himself.

His pilgrimage seems to be based on two competing instincts: to connect with others and to look deeper within oneself. Just as his walk across the island joins dots on the map, so it is also an attempt to connect with past generations of island worshippers whose spirituality wasn’t about personal salvation but instead had closer ties to the natural and supernatural world. At this point the rationalist reader has to part company with McIntosh, to walk, as it were, on the other side of the loch, where everything has an explanation. On his side, McIntosh’s path is altogether more poetic and mystical, as befits the traditional cosmology of Scottish Gaelic culture in which the dead might be seen alive again, faeries might have cast their spells on the land, and second sight is routine. Surely, we rationalists might think, he is only talking about faerie world as a metaphor for spirituality and connectivity, not a fundamental split in space and time. But no: he believes it, citing incidents of second sight he has witnessed himself and quoting approvingly those such as Iain Thomson, the author of Isolation Shepherd, who describe it as entirely normal. On our side of the loch, we rationalists do have our doubts, and think it’s a bit bonkers not to. Yet we feel conflicted at the same time, because when McIntosh reaches those deeper moments of connectivity which are the whole point of the pilgrimage, when he steps inside the remote St Bridgit’s Shieling and hears a voice in his imagination that says ‘I am with you always’, even rationalists might not – or indeed don’t – want to – believe that he is making up the experience:

‘I bow my head, ask blessing, step inside the ring and kneel.

And then I notice. A fresh-sprung fern is pressing through a cleft against the lintel. Not bracken, but a flush of verdure such as I have not seen elsewhere in all my walking.

A line from a John Martyn song comes willowing across my mind.

You curl around me, like a fern in the spring.

And in George Bernard Shaw’s Joan of Arc, the inquisitor puts it to the lass that God’s voice sounds only in her imagination.

“Of course” she answers. “That is how the messages of God come to us.”

The rain is coming on. I pull my hood in tight.

“I’m with you always,” says the voice in my imagination.’

That moment captures the essence of McIntosh’s pilgrimage.  He has entered a humble ruin of uncut stones, yet feels reverence for it, having in the preceding paragraph quoted God’s command to Moses about how only natural, uncut stones can make an altar holy. He has a sense of connectivity, not just with that particular place, but between the head (Shaw) and the heart (Martyn). And where is all this happening? Right in the middle of Lewis, beneath the lee of Rubha Leathann, far from any roads, on difficult terrain. For the fourth night in a row, he is camping – once again in the rain. ‘Civilization,’ he notes, ‘is only four days deep’: after that, it is easier, in a phrase he uses frequently, to ‘uncolonise the mind’. Stripped of the limitations of materialism and routine, the uncolonised mind will ask different – and yes, possibly even pre-modern – questions about what it is to be human. The most fundamental one McIntosh seeks to answer is posed in the Epistle of James: ‘These wars and fightings among you –  where do they come from? Do they not come from your cravings that are at war within you?’

That’s the sort of thing McIntosh asks the top brass of the British Army, when they invite him, as they have every year since 1997, to the Joint Services Command and Staff College at Shrivenham, to talk about his Quaker credo of non-violence. His arguments go far beyond the notion of the ‘just war’ introduced by St Augustine, which ultimately, he argues, locks the Church into supporting violence. What Christ preached was far harder: non-violence, pure and simple; and to McIntosh, nothing else will do. He makes a surprisingly persuasive case, although the Hobbesians, cynics and pessimists among us will never be convinced.

In 2003, McIntosh reveals, he attended a private dinner with two British generals. The war was Iraq is raging; on the front line, British men were killing and being killed. ‘If it turns out that Saddam has no weapons of mass destruction,’ one told him, ‘then Blair will have led us up the garden path’. ‘But would that not make you a war criminal?’ McIntosh asked. The general revealed that he had felt so uneasy that he went in person to see the Attorney General, Lord Goldsmith. At least one other person of a similar rank did the same, we are told. It is to the Army’s credit both that their generals had more doubts about the war than the politicians who ordered them to fight it and that they continue to invite a Hebridean pacifist to make the case for a strategy of non-violence rather than their own kinetic (bombs and bullets) one.

The ‘pilgrimage’ across Harris and Lewis happened as far back as 2009, and when McIntosh completed it, he didn’t think it had given him sufficient material, but ‘the walk just kept walking in me for the seven years it took for this book to find its final shape’. Apart from playing loose with time when telling some of the stories, he says, in one of the endnotes, ‘I have not assumed literary licence. Any magical realism is for real.’ 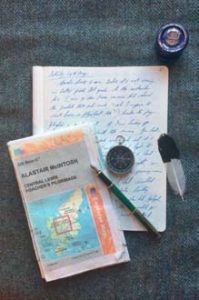 Relics of a 12-day hike across Lewis.