Warning: session_start() expects parameter 1 to be array, string given in /home/customer/www/scottishreviewofbooks.org/public_html/wp-includes/class-wp-hook.php on line 307
 Still ‘Yes’? – Scottish Review of Books 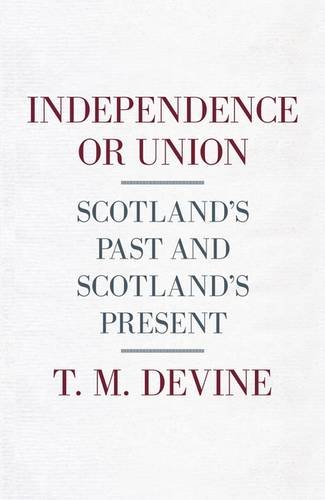 IN case you hadn’t noticed, Scots are struggling to find consensus on the origins of modern Scottish nationalism. Supporters of independence see the roots of their movement as essentially civic: a political response to the alienating effects of Westminster ‘misrule’. Unionists, meanwhile, advance a different narrative. They view separatism as an expression of provincial grievance or, worse, deep-seated anti-English bigotry. To be fair, this disagreement is not helped by the fact that Scottish nationalism has surfaced in a variety of forms since the Act of Union in 1707. In the nineteenth century, Walter Scott was instrumental in reviving aspects of Scottish culture now associated with the (rapidly fading) White Heather Club wing of the Scottish National Party. Likewise, when the SNP was first established in the 1930s, its goal was a fiscally autonomous Scottish Parliament within the context of an imperial British federation, not a fully independent Scottish state with a distinct Scottish foreign policy.

Independence or Union is the fortieth book written or edited by Tom Devine and the second he has published since being awarded a knighthood for ‘services to the study of Scottish history’ in 2014. Like much of Devine’s work, it is empirical, informative, and pleasingly easy to read. It is also flawed. Although Devine provides a clear account of Scotland’s constitutional trajectory over the last four centuries, his attempt to explain the current dominance of nationalism in Scottish public life is, at best, patchy and inconclusive.

The book follows a chronological arc. Devine begins with the 1603 Union of Crowns under James I and VI – whose efforts to forge a lasting political relationship between his two kingdoms collapsed ‘amid a welter of anti-Scottish abusive racism at Westminster’ – before addressing the embryonic 1707 settlement. The English agreed to union as a means of securing their northern border, while the Scots exchanged their sovereignty for access to England’s expanding domestic and international markets. Initially, the Treaty, struck by feudal elites, was deeply unpopular. The Kirk feared a loss of institutional autonomy and ordinary Scots faced a raft of new English taxes on basic goods such as salt, leather and ale. Ironically, however, the ongoing threat of Jacobite rebellion, which carried the prospect of a restored Catholic Stuart monarchy, reinforced unionist sentiment among Scotland’s Protestant majority. By the late eighteenth century, after the final defeat of Jacobite forces at the Battle of Culloden in 1745, the Union was, in Devine’s phrase, ‘embedded’.

In the decades that followed, Scotland reaped the rewards of its new strategic partnership. The lifting of trade embargoes and tariffs on the export of Scottish products to English colonies powered Scottish industrial development. Scottish linen flooded North American and Caribbean markets. Glasgow became the ‘tobacco metropolis of western Europe’. By the turn of the nineteenth century, Scotland was no longer a passive beneficiary of the British Empire, it was an enthusiastic participant in it. Professional Scots took administrative roles in India and East Asia. Poorer Scots, including large numbers of rural Highlanders, filled the ranks of the British army. Imperialism was the cement of the fledgling union state.

For the next hundred years, Scotland was staunchly British. In 1848, as a wave of liberal constitutional nationalisms swept the European continent, the Scots stuck loyally to Westminster. Scottish separatism had vanished from the political scene. In its place emerged a deeply romantic cultural identity, popularised by Scott and embraced by the British establishment, that drew on the myth of Scotland’s ‘ancient’ martial and clan traditions. ‘The sartorial nationalism of kilt and tartan provided a distinctive but inoffensive mode of differentiation from England’, Devine writes. ‘The link between tartanry, the Highland soldier, British patriotism and imperial service helped to lend a new emotional cohesion to union’. These were the first stirrings of what Tom Nairn later derisively called ‘The Great Tartan Monster’. During the first half of the twentieth century, demands were made, with varying degrees of emphasis, for Home Rule, but Scotland’s status as part of the United Kingdom was never seriously contested. The global instability of the 1920s, ’30s and ’40s had a consolidating effect on the Union. It was only in the latter half of the century that the cracks began to open up again.

Devine maps the uneven decline of Scottish unionism from the 1960s to the present day, working rather functionally through the major historical flash points: the end of Britain’s post-war economic ‘miracle’; the secularisation of Scottish society; deepening industrial unrest; the discovery of North Sea oil; Thatcherism; the Poll Tax; the Claim of Right; the creation of the Scottish Parliament; the collapse of Labour’s credibility at Holyrood; and the SNP’s landmark victories at successive elections in 2007, 2011, and 2015. Readers of Iain Macwhirter’s Disunited Kingdom: How Westminster Won A Referendum But Lost Scotland – or of other books on Scottish politics produced in the last few years – will find the material covered here familiar. Devine doesn’t claim to have unearthed any startling new facts but his treatment of the devolutionary era feels shopworn and, indeed, some of his observations about the period are incorrect. It is not true, for instance, that the Holyrood voting system was ‘carefully designed to ensure that nationalism could never threaten the Union’. As independence campaigner Isobel Lindsay acknowledged in a recent CommonSpace article, the SNP favoured the Additional Member System in the 1970s. Curiously, Devine also suggests that it was the SNP’s ‘good fortune’ not to have been blamed for rising levels of unemployment in the wake of the global financial crisis. But the SNP first assumed power in Edinburgh in May 2007, five months before the implosion of Northern Rock, and Holyrood’s control over Scottish economic policy was then (and remains) relatively limited. So the nationalists might have felt justifiably aggrieved if they had taken flack for the crisis.

Devine’s analysis of Scotland’s relationship with Margaret Thatcher is also problematic. His attitude is that of an exhausted social democrat wearily resigned to the logic of free market ‘realism’. ‘What was taking place [during the 1980s]’, he writes, ‘though very difficult to see at the time, was not terminal decline but a painful and compressed process of economic transformation … By the later 1990s, Scotland had a new economy … more varied, stable, and above all tuned to modern international markets’. Devine acknowledges the damage deindustrialisation caused to working class communities but seems oblivious to the wider critique of Thatcher’s economic policy. The Iron Lady failed on her own terms. When she left office in 1990, inflation was higher than it had been in 1980, growth was just as weak, and – despite massive annual North Sea windfalls – Britain’s current account deficit was significantly worse.

Moreover, the long credit-fuelled boom that stretched from 1993 to 2008 – and that is widely attributed to Thatcher’s deregulatory reforms – ended in an unprecedented crash, the consequences of which are still reverberating across Scotland today. Stability, however defined, was not one of Mrs Thatcher’s lasting achievements. Yet Devine barely mentions the Great Recession or, for that matter, the spending cuts implemented by the Conservative government after the 2010 general election. Both are almost entirely absent from his chapter on the independence referendum. Instead, he focuses on the media ‘air war’ fought between Yes Scotland and Better Together in the months leading up to September 18.

Of more interest is Devine’s breakdown of the referendum result. The data he amasses, much of it drawn from the respected Scottish Social Attitudes Survey, confirms a number of important trends. Large chunks of Scotland’s former industrial belt voted Yes. Edinburgh, which has ‘the highest gross average earnings of any city in the UK apart from London’, voted No. Left wing Scots leant towards Yes. Right wing Scots leant towards No. Voters who described themselves as strongly Scottish, together with Asian Scots and Irish Catholic Scots, were mostly Yes. Voters who described themselves as strongly British were mostly No. Scots at the bottom of the income scale, out of work, or without a mortgage backed independence. The most affluent Scots did not. Devine concludes that the Yes campaign wasn’t motivated exclusively by ‘demands for radical change [but] seems to have been driven both by identity politics and by radical ideologies’.

This is a reasonable assessment. However, it overlooks one crucial point: there is a clear link in Scotland between identity, class, and the constitutional question. In the 1979 devolution referendum, 57 per cent of working class Scots supported a Scottish assembly whereas 60 per cent of middle class Scots opposed it. Eighteen years later, 91 per cent of working class Scots endorsed the Scottish Parliament compared to 69 per cent of middle class Scots. Even in the early 1970s, when nationalists were regularly dismissed as ‘Tartan Tories’, the SNP’s voter base more closely resembled that of the Labour Party than it did the Conservatives. In other words, the dynamics that shaped the 2014 vote didn’t come from nowhere: modern Scottish nationalism is tied closely to the faultlines of Britain’s post-war economy.

In his concluding remarks, Devine speculates that, although Scotland’s future as part of the UK remains uncertain, the SNP’s 2015 tsunami ‘could well represent the high-water mark of nationalist popularity’. A second failed referendum, he says, would bury the prospects of independence for ‘many years to come’. He’s right. Without a realistic shot at securing independence, the nationalists’ current control of the Scottish political landscape would be difficult to maintain. Conversely, throughout Independence or Union, Devine argues that Scotland has traditionally viewed the ‘union project’ in contractual terms, as a marriage of convenience based on mutual pragmatic advantage, rather than as a lopsided alliance heavily weighted in England’s favour. Whether the SNP manages to engineer, and then win, a second referendum, that contract is now in an advanced state of disintegration.