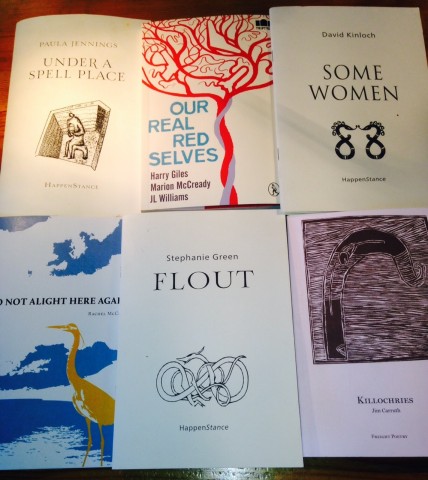 Jim Carruth’s ‘Killochries’ is an evocative, lush, book-length sequence of poems which tells the story of two men – one young and one older – toiling on a hill-farm in the blustery highlands. Having lost his marriage and his job due to alcoholism, the younger man has exiled himself for a year to work with his older relative, whose only book in the house is the King James Bible.  These are spare, short-lined poems which deftly capture the fleeting thoughts of the troubled narrator, as well as his slow road to redemption. There is deep melancholy in the gnomic stanzas which describe the wintry, rural landscape as well as the narrator’s sense of hardship:

Intermittent with the poems are steely verses from the Bible, which somehow ‘speak’ for the other farmer and add an appropriate sense of bleakness and loyalty:

As the Father knoweth me

even so know I the Father:

and I lay down my life

The poems may feel a tad repetitive in their circular ruminations, but the narrator’s slow walk towards a sense of peace makes this collection a remarkable read.

Under A Spell Place is a quirky, sensitive sequence of poems which traces a woman’s struggle with Alzheimer’s. Poet Paula Jennings spent time with Alzheimer’s patient Jean and in the introduction speaks of hearing Jean’s language in a ‘strange collage, her ideas and opinions emerged with insight, sorrow and humour.’ Indeed, these poems consist of unfinished remarks, questions and whimsical statements which give a jumbled view of life, as seen in the poem ‘Part’: ‘We see it, we think it/ but we’re not in it altogether.’ A toy dog that Jean speaks privately to is also a catalyst for some of the best poems. The poem ‘Another word with the toy dog’ is a brief but poignant warning not to trust others:

The slight but effective word changes in the last two lines illustrate a strong sense of language and characterisation of human behaviour. Though the sequence does not seem to build to a substantive climax, these are tightly written and enigmatic poems.

David Kinloch’s crafted sequence of poems provides a unique feminist perspective on the Bible. Intelligent and clever in their curt tone and delivery, these poems trace the stories of significant wives and mothers from the Old and New Testament. Kinloch crafts each poem around a notable event in their Biblical narrative, though with a humorous twist. The opening poem ‘Lilith’ retells the Creation story with a tone of superiority:

Just a skelf, Dad said, just a chip off the…

All I wanted to do was lie with Adam,

The poems feel quite similar to another in their desire to tell a story, the clever use of puns and metaphors, and the non-nonsense tone. But the poem ‘Sarah’, wife of Abraham who bore Isaac at the age of 90, feels a little different for its lilting rhythm and reassuring pattern:

Angels are good for a laugh; they come up

and they say: ‘God will give you a child.’

They stand up indignant, unfold their wings.

One could wish these poems would go deeper into the female perspective, but neither would one want to lose the women’s strong, winning attitude.

Rachel McCrum’s poems speak of myths, family and the sea. They are long-lined, prose-like, robust vignettes which ruminate on past travels, encounters and moments with others. The opening poem ‘Please Do Not Listen To the Sound Of My Voice’ speaks to McCrum’s experience as a spoken word poet, as it argues that a performance can detracts from the substantial great thing

Poems are meant to lie in grace

and voices are not tools to be wielded

There is the flair for the dramatic in poems about feeling lost and adrift at sea, mostly accompanied by family, as in the bold-toned poems ‘I Go Sailing’, ‘We Brought It To The Sea To Air’ and ‘Do Not Alight Here Again’. In these poems, McCrum likes sweeping and declarative lines which accurately describe the narrator’s position, mood and state of mind. And there are quieter moments too, as in the beautifully crafted ‘What I Might Say, When I Might Say It’, written with Edinburgh-based American poet Ryan Van Winkle

It is always tempting to imagine

what my father felt when I landed

when a friend dies,

This is a slim pamphlet, nicely designed by co-conspirator James Harding (the cover boasts an evocative cover white cloud and a charming, sun-coloured heron) and it leaves one wanting more; more poems and even more internal conflict. It will be interesting to see how the various tones and voices McCrum produces will balance each other in a full collection.

Rachel McCrum is part of the spoken word collective SHIFT, with shows at Summerhall  18 & 25 August, 9.30pm

Stephanie Green’s poems are inspired by the Shetlands and offer the reader a kind of tour of the different islands. The poems are delicate, sparse and imbued with a sense of form and shape. A long sequence about the foliage and walks on the isle of Unst contains solemn, lyrical lines which describe a sense of mindfulness and peace: ‘In a land stripped of trees, there are no distractions’. One imaginative thing Green does is build a poem from a body, liking the textures of the island to parts of the male anatomy, both of them evoking a unique landscape, as seen in the poem ‘My Love, The Shetland Trowie’:

His chest hair a scratch kishie

His legs are posts bristling with barnacles

His buttocks are half-submerged skerries

Reading through these works, one might wish for Green to enter the landscape more fully herself, and perhaps to hear more private musings. However, this is a strong and focused debut.

Part of the new Vagabond Triptych series, this is a thoughtful three-poet collection which offers different takes on something ‘red’; namely the topics of war, birth and death. An intriguing front cover containing a red tree with sprawling, intertwined branches suggesting the complicated matters these poems will present.

The opening set ‘Drone’ is the most focused of the sequences, since the action revolves around one female drone. Written by seasoned poet and performer Harry Giles, this sequence contains poems which pit the drone in a number of normal human situations, all of which are meant to highlight her unusual existence. Titles are comical, descriptive and meant to infer an awkward situation, such as ‘The Drone’s Mother Sends Her A TED Talk’ or ‘The Drone Signs the Organ Registry’. The drone endures crises of identity about her purpose, her appearance and her value, all the while observing frailties in others: ‘The Drone Watches a US Presidential Debate from  a Travelodge off the M18 Near Doncaster:

One of these men will have his finger on her button.

She dips a sensor into a bag of Doritos and closes

on, mute off, mute on. This man is lying. This man

hasn’t read a novel for four years. She can

relate. This man’s face is made from fluoro silicone…

Giles’ poems are delicate, observant and satisfying as a sequence.  Following ‘Drone’ is ‘The Birth Garden’, a visceral and often gritty selection of poems on birth by Marion McCready, author of Tree Language and winner of the Melita Hume Prize in 2013. Brimming with images of the body, blood and flowers, this sequence politicises and analyses the purpose and process of birth.  McCready explores the concept of birth in poems such as ‘Heartbeat’ and ‘Birthing a waterfall’, where she viscerally links images of babies, bellies and fluids, to hills, valleys and waterfalls. But the most engaging poem which illustrates McCready’s offbeat and often metaphorical style, is ‘September Is Not The Birth of Things’:

September is not the birth of things

though it was the month

she was born in.

the muscle of the wind’s song.

The month they turn

into a pack o howling dogs –

in the chill dawn.

Rounding up the collection is Jennifer Williams’, sequence on war, which mixes symbols and arguments from both past and modern warfare. There is depth to these lush poems, which evoke moving scenes of individuals at war. ‘Violence in the Airport’, ‘Well’ and ‘Hope’ share an ominous voice in their descriptions of those conflicted by fighting, but the outstanding poem is ‘Bomb’, where the short lines showcase Williams’ talent for bold and declarative poetry:

What a small villain you are;

the pulse of beloved martyrs.

those beady black eyes to reflection,

makes of your mouth an absence?

Our Real Red Selves is a contemplative anthology where each of the three poets brings an extremely different, though complimentary perspective on intimate topics.

Harry Giles, Marion McCready and JL Williams will be reading from the Our Real, Red Selves as part of the Edinburgh Book Fringe, on 22 August, 1. 00pm, Word Power Books