Warning: session_start() expects parameter 1 to be array, string given in /home/customer/www/scottishreviewofbooks.org/public_html/wp-includes/class-wp-hook.php on line 287
 Volume 10 Issue 4 – Editorial – Scottish Review of Books 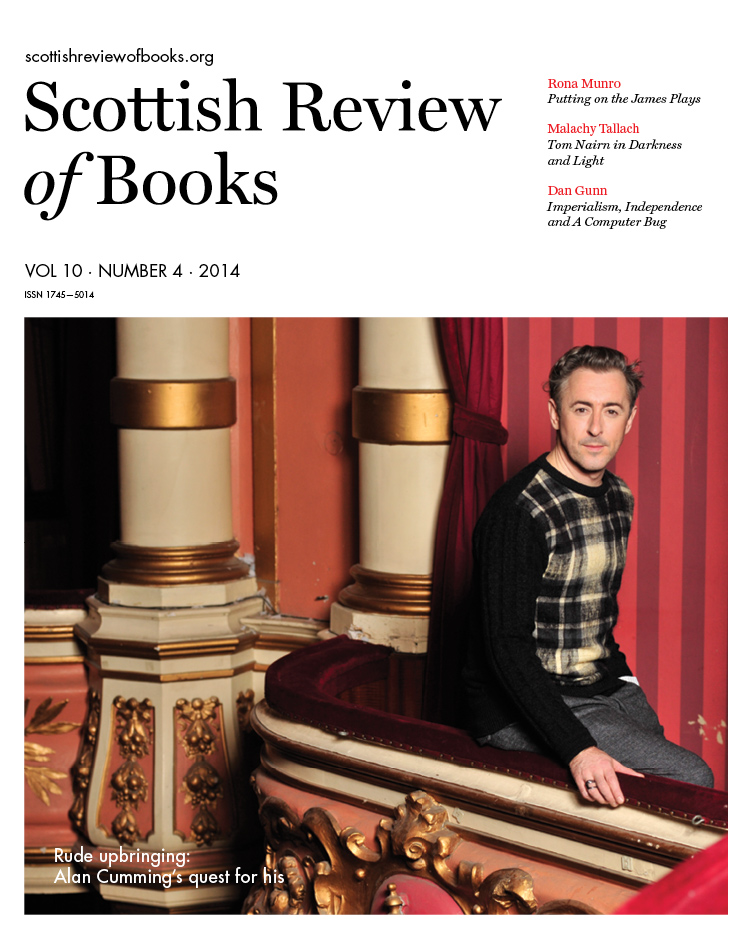 IN 1970, there appeared a collection of essays in honour of Hector MacIver who taught English at Edinburgh’s Royal High School. MacIver, who was born on Lewis in 1910 and died in Midlothian in 1966, was a man of many parts. He was a writer, broadcaster, producer of plays, a talker and a speaker. He was also much liked and greatly admired and an immense influence on many of those who fell under his spell. The collection was called Memoirs of a Modern Scotland and its editor, Karl Miller, had been student of MacIver.

‘He was not famous in the usual sense,’ wrote Miller, though there is no doubt he was well-known in certain circles.  The essays which followed were not all concerned directly with MacIver but with things he had been interested in: politics, poetry, history both national and personal, the intellectual life, the state of the nation. Among the contributors were Sorley MacLean, Hugh MacDiarmid, William McIlvanney, Muriel Spark, Alastair Reid and Miller himself. By any standard, it was a stellar lineup. If you want to know what it was like to be a questioning, imaginative person in Scotland forty years and more ago then Memoirs of a Modern Scotland is as good a place as any to start.

We thought of Memoirs of a Modern Scotland when the deaths were announced earlier this autumn of Alastair Reid and Karl Miller, both of whom were in their eighties. Two very different characters, they shared a common love of literature. One, Reid, was creative, while the other, Miller, was a critic. Words was the currency in which they traded and they were not profligate in their use. Both left Scotland in their twenties and never returned to live here permanently. Nevertheless (as Mrs Spark was wont to say) they never lost interest in the country of their birth and formation and always stayed in touch. Miller went on to edit the Listener and the literary pages of the Spectator and the New Statesman and to found and edit the London Review of Books; Reid, meanwhile, wrote around one hundred essays and poems for the New Yorker over a period of fifty years.

Their contributions to Memoirs of a Modern Scotland are well worth revisiting, not least because of the portraits they paint of their upbringing. Miller’s essay is largely concerned with MacIver and Edinburgh. Not without cause, it is titled ‘Romantic Town’ and so, it seems, the capital must have been even to a young, bookish boy coming of age in the 1940s and 1950s. Through his inspirational teacher, Miller met Dylan Thomas, then in his pomp, and came to know Norman MacCaig, another alumnus of the Royal High, who became a lifelong friend. Edinburgh, then, was truly a literary city in which poets reigned unchallenged. Once, recalled Miller, he met MacCaig at the General Post Office (now the HQ of Creative Scotland), where they spent an hour talking about Lorca. ‘MacCaig did not seem to mind spending an hour talking about Lorca with a schoolboy he hardly knew…, and the encounter was typical of the town as I knew it then, of its grave interest in literature and of its private courtesy.’

In his essay, ‘Borderlines’, Reid wrote more consciously from the point of view of an exile. Whereas Miller settled in London, Reid was antipathetic to the notion of settling anywhere. Perhaps of no one is it more accurate to say that he was footloose and fancy-free. Having left Scotland after the Second World War, he roved wildly, living for prolonged periods in the United States, Spain, Central, South and Latin America. With distance, he wrote, ‘Scotland became more and more incredible to me, I had to return to verify it, if you like – that, and to have a whiff of the growing landscape, since I was born and bred there, and childhood landscapes are irreplaceable. My feelings about Scotland now all come from a distance that is not just geographical; I would never live there again.’

Both Miller and Reid were drawn to the Borders. Among other books, Miller wrote a peerless biography of James Hogg, aka the Ettrick Shepherd, best known for his novel, The Confessions of a Justified Sinner. In particular, he was intrigued by Hogg’s double life, that of a literary man who tended sheep, of a rough, rural type lionised in the smart salons of the nascent New Town. ‘Many writers,’ wrote Miller, ‘have pretended to be shepherds. Hogg really was a shepherd, while also, at times, a pretender, a role-player.’ Interestingly, Alastair Reid makes no mention of Hogg in ‘Borderlands’, nor does his name crop up in other of Reid’s writing. Born in Whithorn,  Reid was not a Borderer by inclination but went to live there as a youngster when his minister father was given a parish in Selkirk, out of which, he ruefully remarked quoting a local worthy, ‘a day oot o’… was a day wasted’.

It was not a view to which Reid subscribed. For him, Borderers were too much concerned with local rivalries and the past than what the future could be like and what it might hold. It did, however, allow him ‘to cultivate a conscious disrespect for the place’ which, in turn, helped him live the life he did and write the books we look forward to reading over and over again.