Warning: session_start() expects parameter 1 to be array, string given in /home/yourband/public_html/srb.swddev.com/wp-includes/class-wp-hook.php on line 286
 North and South – Scottish Review of Books

When I stepped off the train in Inverurie, the first word I heard – spoken with glee – was soothmoother. It was then I realised there are many degrees of north. I came from the Scottish lowlands, so far south that those in Aberdeenshire, with whom I’d gone to stay, considered it another country. We spoke differently there, as they bluntly intimated. Maybe so, I thought, but not as impenetrably as the man selling butteries in the bakery outside Aberdeen train station, or my host’s son who, after hearing me utter a single sentence, pinned that label around my neck, where it has swung gently ever since.

His language was so guttural and strange, I felt I’d landed in Finland. No-one else in his family spoke in the Doric, but Duncan, at nine the baby of the house and a little younger than me, rolled it around his tongue as if it was a gobstopper. This briar of a dialect was as clear a marker of northern identity as an arctic fox or an inuit’s furs.

Every summer thereafter I spent a few weeks with Duncan and his older sisters in their granite manse. We lived outdoors, playing in the shadow of Bennachie, which rose purple and forbidding above the River Don, where I finally learned to swim. This was my initiation into a place that felt far distant from the south. Even the air smelled different, clear and sharp as if it had reached this part of the country entirely unbreathed. The blaeberries tasted like sweetened ink. Bracken and willow herb shimmered with pollen and bees, and an occasional startled adder would slither out of sight into pinewoods so dense and quiet they felt as if they had hushed themselves at our approach. 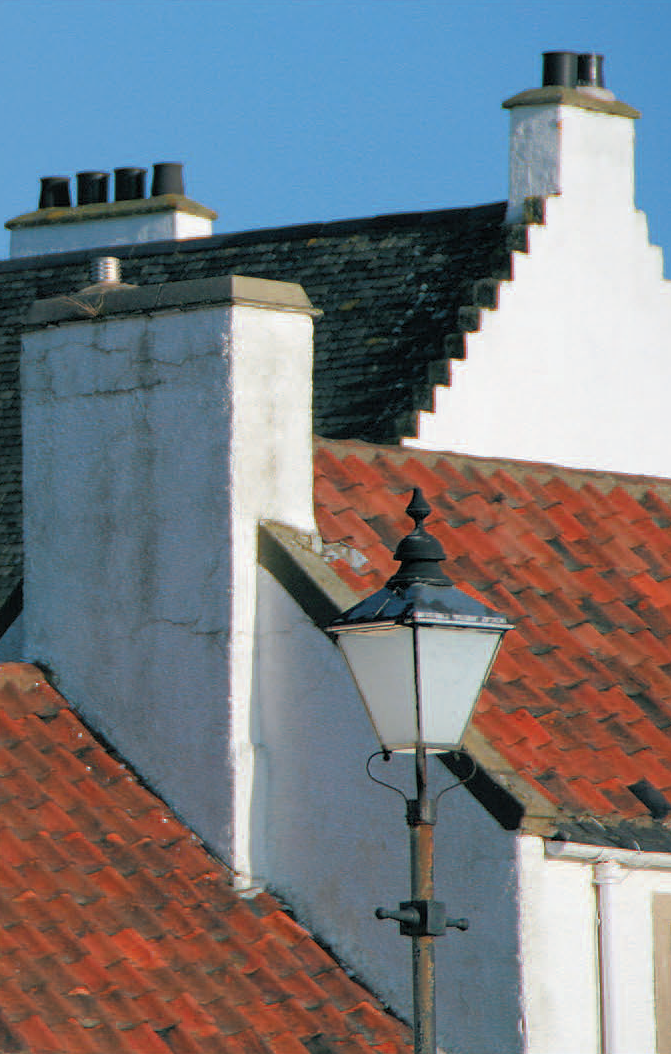 This was the north in its halcyon days, a fleeting few weeks of warmth and lingering evening light in Aberdeenshire’s restless calendar. One understands why Peter Davidson imbues this season with almost magical qualities. In his hypnotic evocation of the corner of the north where he lives – also in the lee of Bennachie – Davidson reflects on the essence of this terrain, the way weather and light – ‘an aesthetic of fugacity’ – change like mercury by the hour, or minute; the way old kinships, with the Baltic and beyond, keep a deeper hold on this part of the world than newer, less heart-felt bonds with the south.

Davidson has written about the north before, both in his non-fiction The Idea of North, and less directly in his recherche collection of poems, The Palace of Oblivion. In one, he is the spirited academic, making links over centuries and countries and drawing on his knowledge of art, as Professor in the Department of Art History at Aberdeen University, to illuminate these outer regions as depicted and immortalised in paint since Breugel’s time. In the other he is a romantic and aesthete, in love with his place near the top of the world.

For this reader, however, Distance and Memory is finer than either, fusing the lyrical, hummingbird eye of his poetry with a broad and scholarly overview. In the process he creates something even more powerful and personal, more exquisitely polished and profoundly felt. A book of hours, a work of memoir, almost of meditation, it comes close, at times, to elegy. It therefore is no surprise when, towards his conclusion, Davidson writes, ‘melancholy is one of the pleasures of the north’. Throughout he has been unabashed in his conjuring, constant as a refrain, of fading light, lost summer, long-gone parties and friends.

There are, of course, many norths. It all depends where you stand. There is the explorer’s merciless playground, a territory of ice and fear far beyond ultima Thule, where normal life is unsustainable, and only those prepared to meet death dare venture. Such a north is the extreme. It shares as little in common with what you might call the domestic north, such as Aberdeenshire, Orkney or Norway, as the depths of the Pacific Ocean do with an Olympic pool. One is an exercise in superhuman endurance, of hyperbolic adjectives and eye-watering statistics; the other is a subtle and constant negotiation between habitat and nature, civilisation and the forces that daily work to undermine it. In the one there is outright defiance of God or the odds, in the other an invigorating sense of precarious existence, and a bone-deep affinity with the peerless beauty of this unsung land.

‘To choose to live here,’ writes Davidson, ‘is to choose the luxury of living in a rural Scotland that preserves a level temper, a temper which in the more populous Lowlands is only remembered. It is also to accept remoteness for good or ill…’

Apart from the cruellest days of winter, this remoteness is plainly a boon to one of Davidson’s temperament. It seems to suit those who prefer to observe what surrounds them at leisure and in peace, rather than be jostled and crowded, the air around them stale from a thousand lungs.

The north, wrote Emily Dickinson, is the true heart of winter. Certainly, few of us who live in northern lands, be it Shetland or East Lothian – which to a Londoner is far beyond their national north – would be able to tolerate the lack of warmth or sunshine did we not appreciate the austere pleasures of the darkest months. To southerners, be they from Cornwall or Crete, north equates with winter. Yet for us northerners, full-blown winter occupies only a fraction of our annual clock. Even so, the gradations of light and clime when the year is at its lowest are closely, almost reverently observed, each frost or fog or thaw significant to that day’s business and mood. It is the season when we must be most alert.

Davidon’s winters are harder than many, not only because of his location but since he appears to dread them. ‘When autumn draws towards its inevitable end, how best to respond to the assumption that I am one “Before whom winter opens like a grave”?’ he asks, quoting Louis MacNeice. It is a terrible question, and yet, on the evidence of Distance and Memory he, like so many, finds something cathartic and cleansing in the unrelieved darkness and cold. Something amusing, too, as he pictures himself like the host of a remote house in a Buchan thriller, ‘where the protagonists spend the last night before they take to the wilderness, the frozen heather, the rocks above the snowline’.

Yet there’s no denying the toll winter’s grip takes on him, and perhaps all of us. ‘I am still weakened and tired out by it all, longing for orchards and music and company. The scoured dimness on the hillsides, gashed with snow, is hardly a colour, more an aspect of life which has to be endured.’

Scoured, in fact, is the word he believes best sums up paintings of the Scottish north. Through each chapter, he draws explicitly or subliminally on the ideas and perspective of artists who have turned their attention to the cooler colours of cold, or who refused to flee their homeland. Of all the artists he mentions – Casper Friedrich David, Philips Wouwerman, Eric Ravilious – no-one is more akin to Davidson’s literary palette than Henry Raeburn, with whom he shares an affinity of poignancy, truth, emotional depth and authority.

A master portraitist himself of landscape and sky, Davidson writes with mesmerising clarity, the poetry of his prose as much like music as art. Thus he writes of midsummer’s endless twilight, ‘It confuses even the birds: at nine o’clock, larksong is still bubbling down from the sky, the oystercatchers are whistling, and the buzzards circle, mewing sweetly, invisible in the upper air. The swallows are out catching gnats, and as the dimness comes down, they will be joined by the pipistrelles, flickering through the air like scraps of burnt paper.’

Davidson’s book is a hymn to the countryside and culture that nourish and diminish him, but not in equal measure. Gloriously idiosyncratic, illuminating and wise, it is one of the most beautifully written works you are likely to read in a decade.

The geography of north is an individual matter. No sat-nav can point out where it begins. From the viewpoint of a Roman, north is Milan. For the Milanese, Britain is almost at the polar cap, and Scotland a mere splinter of ice. Living as I do within sight of Fife, I am forever reminded that I lie south of the rest of Scotland. I rarely think of myself as a northerner, yet on a train to London I feel dislocated, less at ease once it pulls out of York, as accents and attitudes change. On the return journey, the sight of Inverness or Aberdeen on the King’s Cross departures board brings a pang of pleasure, but it is not until the carriage window fills with the bleakness of Northumberland moors that I know home is finally drawing close.

North is not, as some might claim, an attitude of mind, but living there does shape one’s outlook. Remoteness, as Davidson suggests, fosters rebellion, dissidence, and disobedience. Whether it was Jacobite rebellions or enclaves of diehard Catholics within a stormy Protestant sea, northerners are especially allergic to being told what to do or think. Distance from authority is the key rather than any compass point or latitude, but one cannot escape the thought that remoteness is a two-way street, from which the northerner reaps more. Those who are considered cut off consider themselves firmly at the centre of the things that matter. Perhaps because their location is so often impressed upon them, they know their place and are glad of it. When their eye turns south, it is more with suspicion than envy, less in sorrow than in pity.