Warning: session_start() expects parameter 1 to be array, string given in /home/customer/www/scottishreviewofbooks.org/public_html/wp-includes/class-wp-hook.php on line 307
 Apocryphal Poems – Scottish Review of Books

Gerald Mangan claims to have discovered previously- unknown works by some of Scotland’s favourite poets.  Here we present a selection.

He keeps telling me those stains

on his shirt-front  are ketchup

from the all-night fast-food joint. And I keep saying: Pull the other one, I didn’t come up the Clyde

all day in the launderette.

But does he listen? Does he hell. He snores in his pit all day, waiting for sunset, and God knows what he does for dinner. I know he likes his meat

but he always eats out. Why

are you shutting me out,

I ask him, keeping all your quality time for yourself?

But all he does is turn over

in his customised box-style

Don’t forget to feed the bats.

I’ve done the whole crypt over

in Jugular White, Transfusion Red and Scab Violet, his absolute favourites on the colour-chart.

I keep it spick and span.

and I kill ninety-nine per cent

of all known light-sources,

but he never even notices

or my sexy sharkskin basque

or my cobweb-fine black stockings

or my permanent farewell wave

or the gorgeous wee brass necklace

I picked up at the flea-market

for a chorus, which I wear to hide those funny wee holes in my neck.

I’m dressed to die, some nights.

But he still goes out, hell-bent

on painting the town red.

Is he cheating on me ? Who knows. Sometimes he says I’m dead beautiful. He says he’s mine,

till death do us part.

But something tells me it’s not

a marriage made in heaven.

He takes too much out of me.

Should auld acquaintance be your lot, An’ weel-kent faces a’ ye’ve got

Tae see ye through the year, ye ought

Ye cannae smell them when you’re dead. So seize the day, as Horace said,

And cease your toils.

Come, lassies, lowse your maidenheads! They’re guid for nothing when ye’ve shed

No’ unlike a sleekit plumber Snafflin’ scraps o’ lead in hunners,

A Suitable Case for Treatment

Metaphors are among the man   things

Metaphors are among        many things

Metaphors are among the many things that make me

IN PRAISE OF THE THIRD FORTH BRIDGE

O mighty Replacement Crossing over the silvery Forth, Where kings and queens have oft been ferried back and forth – How confidently you will stride across from shore to shore

To replace the second Forth Bridge, which isn’t safe any more!

The first Forth Bridge, with its countless girders of iron, Still soars above the Firth as lofty as an ode by Byron, Though it does require a fresh coat of paint ever summer To cover the rust, and the unsightly weldings by plumbers.

The second Forth Bridge, with its mighty hawsers of steel,

Has sailed through many a steely wind on an even keel,

Like our gracious long-lived Queen, at the helm of our great Nation, Who first declared it open to loud cheers of approbation.

But cruel Time has now defeated its makers and its menders, For heavy lorries and coaches have been bursting its suspenders. The suspense has been killing it, while waiting to know its fate. Sunday strollers and cyclists will soon be all it can take.

So let us hail the third Forth Bridge, new gateway to the north – And let us hope we’re still alive to hail the opening of the fourth! Perhaps the firth will see a fifth, but I hope that day comes never. When God said ‘Go Forth, and multiply’, He didn’t mean the river! 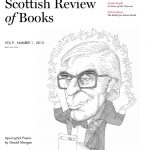 Too Many Bison: Infantilising Museums