Warning: session_start() expects parameter 1 to be array, string given in /home/customer/www/scottishreviewofbooks.org/public_html/wp-includes/class-wp-hook.php on line 307
 Volume 9 – Issue 1 – Editorial – Scottish Review of Books 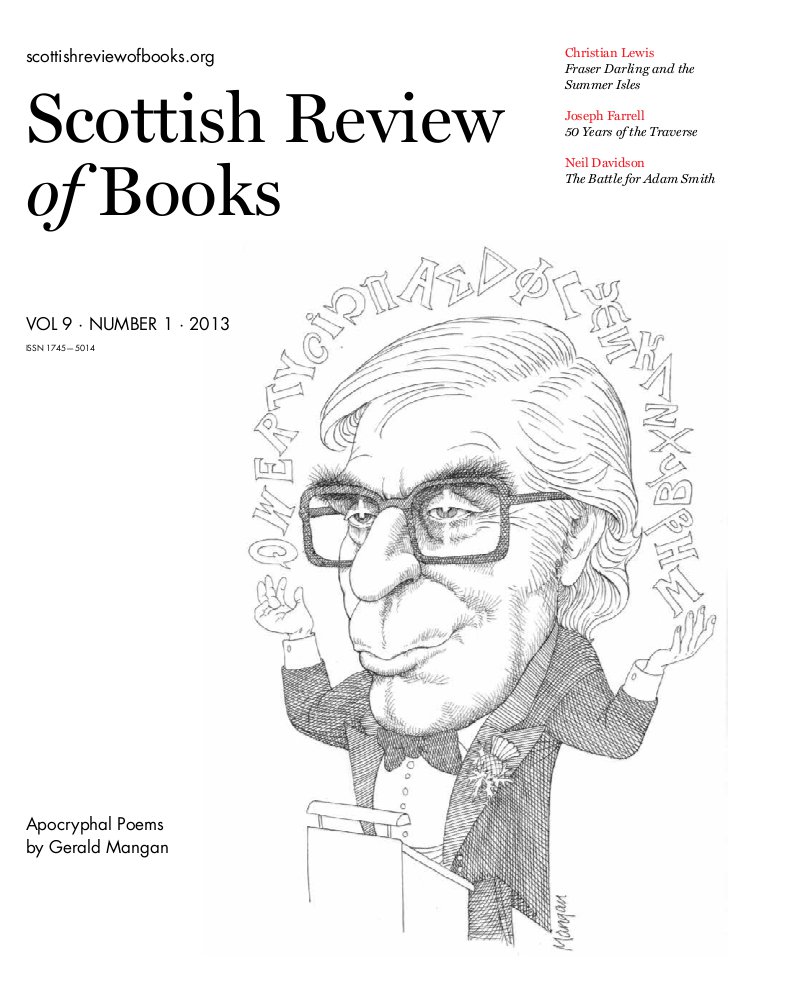 Alasdair Gray, who is interviewed in this issue of the Scottish Review of Books, recently caused a stushie with an essay titled ‘Settlers and Colonists’. For many commentators that was provocation enough and Gray, hitherto regarded as a national treasure, was roundly denounced as, at best, anti-English, and, at worst, racist. Politicians of every hue, including the Nationalists, who had once embraced Gray, eagerly distanced themselves from him, as if he had a transmittable disease. But what few people did was read Gray’s essay in its entirety, a common failing when politics and literature collide. We are reminded, for example, of the case of Salman Rushdie and The Satanic Verses, which very few of those who burned copies of the novel and effigies of its author had ever read or had the capacity to read.

However we believe that Gray’s essay deserves to be read and commented upon soberly. ‘Colonists and settlers,’ he wrote, ‘may start with the same homeland and some loyalty to it, a loyalty dependant on support the homeland gives them. The difference between these two sorts of invader becomes obvious when they have subdued the local natives by exterminating many of them, as in Australia, driving them away, as in North America, enslaving them as in South America, or (more rarely) giving some of them equal rights, as may be the case in New Zealand.’

No one, least of all Gray, is suggesting here (or elsewhere in the essay) that Scotland is directly comparable to the places mentioned. But it could be argued that the 1707 Union with England led to a form of colonisation which pertains today and which, in the eighteenth and nineteenth centuries, resulted in the Highland Clearances and the mass  expulsion of the indigenous population in a manner not dissimilar to that suffered by Native Americans.

That’s what happens when a country is colonised. Its own people are marginalised and their culture is derided and relegated until it slips off the radar. Colonists do not want to nurture or promote indigenous culture, for they recognise its potential threat. Instead they prefer to mock or ignore or suppress it.  Native Americans, for example, were often discounted as barbaric and in urgent need of civilization, despite the fact that they were adept at husbanding their resources and protective of the environment, which is not something that could be said of their usurpers.

In contrast to colonists, settlers do their best to fit in, taking heed from the old adage that when one is in Rome it is perhaps a good idea to behave like a Roman. This requires patience and tolerance and a degree of sensitivity. As a newcomer to a foreign place it is never advisable to talk about it in public when one’s knowledge of it is poor. After all, it is only the rudest and most arrogant of guests who comment adversely on their host’s taste in furniture or wallpaper. But too often in recent years people who have been appointed to positions of power in Scottish culture have aired their views – on the ‘inferiority’ of Scottish painting, the lack of depth of Scottish drama – and paraded their ignorance with scant consideration of any offence it may cause.

This, we believe, is what Gray was alluding to when he referred to the appointment of a non-Scot as head of Creative Scotland. It was not so much that that person was English but that he admitted to knowing nothing of Scottish culture and said that he was willing to learn. As Gray said, ‘Ain’t we lucky.’ What he then went on to say was: ‘And if you feel these remarks are full of anti-English prejudice, remember that these colonists were invited here and employed by Scots without confidence in their own and people.’

As we move ever closer to the independence referendum is it too much to ask that serious consideration be given to such sentiments? For too long, it seems, Scottish culture has had to shriek to hear itself heard on its own cabbage patch. Does it not seem odd, for instance, that the Edinburgh International Festival is often notable for its resistance to Scottish content? Or do Scots simply not care? But if that is true then what is the point of independence? What would be good to have is reassurance from our political masters that they have thought more deeply about cultural policy beyond offering knee-jerk acknowledgment of the arts’ contribution to our economic well-being. Which, when is all is said and done, is insulting and embarrassing but, alas,  nothing less than we expect.

Too Many Bison: Infantilising Museums

Thatcher in the Raw