Warning: session_start() expects parameter 1 to be array, string given in /home/customer/www/scottishreviewofbooks.org/public_html/wp-includes/class-wp-hook.php on line 307
 Volume 8 – Issue 2 – Editorial – Scottish Review of Books 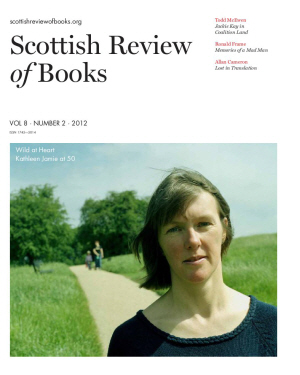 Is there any meaning in anything?’ Such was the understandable reaction of Rhea Mitchell, the wife of James Leslie Mitchell, who is better known by his pseudonym, Lewis Grassic Gibbon, to her husband’s sudden death in February 1935. Gibbon was just 33 years old when he died of peritonitis. Writing to Hugh MacDiarmid, the recently distraught widow poured out her feelings. A life of such promise had been curtailed cruelly short with so much undone. ‘It’s such a pity for his own sake to have been cut off so young, so full of vigour and power,’ she wrote. Naturally, she was concerned for herself and her children. MacDiarmid offered help but he himself was strapped for cash. ‘I don’t know what I could ask of you,’ Mrs Mitchell wrote, ‘except it be your influence in getting either Spartacus or Sunset Song filmed. Both are being considered by [Alexander] Korda [the film producer] at the moment.’

What became of Korda’s interest we do not know other than that no film of either novel was made by him. Nor has one ever been. Eventually, Sunset Song was dramatised nearly four decades later by BBC Scotland in a still renowned production starring Vivien Heilbron as the heroine Chris Guthrie and including the first nude scene on Scottish television. Now, however, a feature film is to be made of the novel routinely nominated as the nation’s favourite, not, as you might expect, by a native filmmaker but by the English director Terence Davies. He has previously adapted novels by John Kennedy Toole and Edith Wharton. Playing Chris will be a young English model, Agyness Deyn, who has limited acting experience. Much is resting on her slim shoulders.

While we await the film’s appearance we have been re-reading Sunset Song and marvelling at its tungsten lyricism and unsentimental modernism. Chris, of course, is at the novel’s core, as Jean Brodie and Jeannie Deans are in The Prime and The Heart of Midlothian. In his introduction to the Canongate Classics edition, Thomas Crawford declared that she was ‘the most convincing female character in Scottish fiction’, by which we are not sure what he meant. In any case, how would he know? What is surely irrefutable, though, is that Chris feels real, that she talks and behaves and reacts in a manner that is believable and convincing and true to life. In short, we recognise her as a person, as we can all great fictional characters, be they Madame Bovary, Anna Karenin or the hypersensitive little boy in Proust’s roman fleuve who cannot go to sleep until his mother bids him goodnight.

The brevity of Gibbon’s life belies its busyness. He was born and brought up in the north-east of Scotland where farming was – and remains – a fundamental means of making a living. If ever a landscape can be said to have forged a literary style it did so in Gibbon’s case. His sentences seem to unfold like furrows in a newly-ploughed field, the richness of the soil reflected in language that pungently rejoices in its association with the earth. There is something fundamental and elemental in Gibbon’s prose, which is rooted in a time and a place that exists today only in a few memories and an evergreen novel. Chris loves and loathes it. ‘You hated the land and coarse speak of the folk,’ writes Gibbon of his heroine, ‘and learning was brave and fine one day; and the next you’d waken with the peewits crying across the hills, deep and deep, crying in the heart of you and the smell of the earth in your face, almost you’d cry for that, the beauty of it and the sweetness of the Scottish land and the skies.’

Chris’s ambivalence towards her homeland was echoed by her creator. In his book Scottish Scene, sub-titled The Intelligent Man’s Guide to Albyn, he divided the history of Scotland into three phases: colonisation, civilisation and barbarism. Writing from the perspective of ‘a pleasant village near London’, i.e.Welwyn Garden City, he had much fun at the expense of nationalism. ‘I like the thought of a Scots Republic with Scots Border Guards in saffron kilts,’ he joked. Gibbon was never mealy-mouthed or weasel-worded. He said what he thought and said it forthrightly.

In that regard, he was the equal of MacDiarmid and his passing perhaps put too much pressure on his friend single-handedly to drag Scotland into the modern era. The tragedy of Gibbon’s early death was that together they may have forged a cultural identity for a nation that is still in sore need of one in which it can put its faith and confidence. As it is, his flame flickers intermittently. Who among younger writers reads him today? Who among them knows much about him? Though he has his devotees, they are often non-Scots, such as Budd Schulberg, the author of On the Waterfront, who missed no opportunity to hymn him. There is not even a biography of him, as there is not of so many of our seminal literary figures. It is a common form of neglect hereabouts.

SRB Diary: No Time to Lose: A Glasgow Diary