Warning: session_start() expects parameter 1 to be array, string given in /home/customer/www/scottishreviewofbooks.org/public_html/wp-includes/class-wp-hook.php on line 303
 What’s Left? – Scottish Review of Books 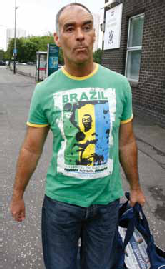 It ought to be straightforward. A person you knew intimately for decades is convicted of perjury. He confessed the truth to you and to others long ago; the verdict is no surprise. Some weird compulsion – many adjectives are available – drove an old friend to tell lie after suicidal lie. Poisonous fame and a suppurating ego have destroyed him. It’s simple. Write it down.

‘The Tommy Sheridan Story’, as a misleading sub-title would have it, reserves the simplicities for its tabloid-ready prose. Alan McCombes – ‘a former member of the clandestine central committee of the old Militant Tendency in its 1980s heyday’, as he records – does not fear repetition. His Sheridan is (concurrently) vain, shallow, ill-read, celebrity-obsessed, exploitative, megalomaniacal, hypocritical, ruthless, cowardly, abusive, disloyal, sexually warped and ‘phoney’, an affectless zombie ‘without basic human decency’.

You wouldn’t touch that sort of creep with a barge-pole. So who was the working class hero promoted so assiduously, once upon a time, by the Scottish Socialist Party (SSP), with McCombes – his ‘closest political associate’ – in the van? The men knew each other for decades. So in all those years our author failed to notice that the comrade was even slightly dubious?

There’s another mystery. On 9 November, 2004, according to this and almost every other account, Sheridan made his confession to the executive of the SSP. He it was, as most of the 22 present would later testify, who had indulged in a ‘cheap thrill’ or several in a Manchester sex club named Cupids. The News of the World (NoW) and its ‘sex columnist’ had named the right MSP nine days previously. Nevertheless, the ‘stunned’ meeting heard that Sheridan ‘was planning to fight a legal battle to disprove the truth’.

Millions of pounds and days of court time would be expended thereafter. The SSP would be torn apart. First, Sheridan would cease to be the party’s convenor, then conflicting legal strategies would collide. McCombes maintains that the fallen hero embarked on a campaign of systematic dishonesty in an effort to conceal previous deceits. But he fails to answer the second question: just when did the SSP executive plan to share the truth, as a matter of political honesty, with Scottish voters?

The detail matters. McCombes makes a virtue of confidentiality, and of having no personal interest in anyone’s sex life – save when he conflates pathetic ‘swingers’ with the sex industry – yet he treats 22 adults as victims of a Sheridan plot. Thus: ‘This was all becoming extremely messy and escalating out of control. The SSP executive had reluctantly accepted that Tommy would deny the specific Cupids allegation if and when it was put to him. But this aggressive onslaught to mislead the public was never in the script’.

Which script? In time, Sheridan would be convicted for perjury precisely because of his effort to ‘deny the specific Cupids allegation’. No doubt, as a majority of 22 would say, he embroiled the party in the consequences of his hypocrisy. The minutes of the 9 November meeting – endlessly disputed, hidden, adumbrated and wielded like a weapon on all sides – would prove crucial. The fact remains that, to begin with, they went along with it. By which socialist principle was that justified?

In the McCombes version, Sheridan is a cartoon villain. This does well enough for soap opera purposes, but it often leaves the author proffering assertion – Tommy was behind it all, whatever it was – when evidence might have been rather more convincing. Downfall’s pages are littered with mentions of what the author ‘knew’, or had been told, but too often the burden of actual proof is avoided.

Does it matter? Sheridan’s action against the NoW generated so much contradictory testimony a criminal investigation became all but inevitable. That rumbled on for month after month and led, finally, to the perjury conviction. The defendant’s claim that a vast conspiracy was at work failed to convince a majority of the jury. On that reading, there was little enough of Sheridan’s character left for McCombes to assassinate. So who would you believe? The proven liar or the betrayed and disillusioned former ally?

Things are not so simple. Sheridan’s perjury trial was a curious affair. Charge after charge was deleted. Spectacularly tawdry allegations concerning episodes in the affair ceased suddenly to interest the Crown, despite that long, painstaking, multi-million pound investigation. Above all, charges of perjury against Gail Sheridan, accused of lying on her husband’s behalf, were deemed to be no longer in the public interest. The prosecution could claim that it was simplifying the case, or showing humanity to the mother of a young child. The lay person is left to wonder over the logic involved.

Perjury is perjury. As all concerned never tired of repeating last December, it is a crime taken very seriously indeed by the courts. Unchecked, it has the potential to bring down the legal system. That’s one reason, an obvious reason, why perjurers invariably do jail time: pour encourager les autres. The Crown made it perfectly clear, meanwhile, that Mrs Sheridan’s acquittal did not mean that her innocence was accepted. So why was the person who lied for the liar set free? Arguably, it was Gail Sheridan’s evidence that cost the NoW the first case and, in theory, £200,000.

But there is, of course, another aspect to all of this, one which – inevitably enough – eludes McCombes in a book written at speed. He touches on phone hacking and the NoW. He mocks the claim that Sheridan’s car was bugged by person or persons unknown. He does his best to explain why quite so many people, one of them a very old friend of the accused, were prepared to accept money from the tabloid.

McCombes even mentions a certain newspaper executive named Andy Coulson as the individual who authorised the payment of £200,000 (‘plus fifty grand for the local community centre’) to one George McNeilage for a piece of videotape taken, said its owner, in November of 2004, one week after Sheridan’s confession to the SSP. Coulson is better known now, let’s say, than he was then.

Why make the film – a murky piece of work, but one given credibility by forensic experts – and why seek the money? The author gives McNeilage, ‘involved politically with Tommy for twenty years’, the benefit of any doubts over the cash. The aim, he maintains, was to protect the victims of Sheridan’s lies, themselves facing accusations of perjury, and inflict “poetic justice” on the NoW. The poetry didn’t come cheap. But Sheridan’s taped declarations were explicit: he had indeed swung, as it were, in Manchester.

That raises the issue McCombes elects not to address. His old comrade’s crime was perjury. He was tried and convicted. But what had he actually done to attract the NoW in the first place? You may despair of his alleged tastes. You may attempt to construct a feminist argument around consensual promiscuity. The fact remains that Sheridan committed no crime. McCombes offers some innuendo involving cocaine use, but fails to justify the allegation. Beyond that, Sheridan’s behaviour, squalid or not, was legal.

The same cannot be said about the unlamented NoW. As even Rupert Murdoch now seems prepared to admit, its sensational tales depended on wholesale criminality. It victimised and persecuted individuals simply because, so it believed, it could. If its journalists – the word will have to do – could treat murdered Milly Dowler as mere headline fodder, why would it hesitate to hunt down an MSP with outré tastes in sex? But it’s worth repeating: before he lied, Sheridan committed no crime. Who would still say the same about his NoW foes?

Lawyers are contemplating these matters, so we had best take care. McCombes depicts his subject, time and again, as a ruthless and pathological liar. How would such a figure compare now, in common opinion, with a Coulson? How would we rate the disgraced editor’s Scottish subordinates, especially Bob Bird, his local boss in Glasgow’s Kinning Park?

The record shows that, under assault from such individuals, Sheridan did the stupid thing and lied. In consequence, McCombes deems him worthless (and worse). But how many, facing such pressures, would have resisted the temptation? How does a dishonourable MSP compare with a law-breaking, vigilante tabloid on the rampage?

It’s no excuse, of course. The consequences of perjury are severe for good reasons. But didn’t Coulson tell a Scottish court that he had no knowledge of phone hacking or payments to police officers? Strathclyde Police are even now investigating aspects of the NoW scandal – meaning Coulson – as they affect Scotland. Whether that will help Sheridan remains to be seen: many others have testified to his Manchester misadventures. But still, to put it no higher, the notion of entrapment no longer seems entirely ridiculous.

Inadvertently, meanwhile, Downfall tells us a lot about the collective failures of the Scottish left. The NoW would have called that a result. By the time Sheridan went to jail, according to McCombes, ‘the one-time idol of the poll tax campaign had inflicted more damage on the left in Scotland than Margaret Thatcher and Rupert Murdoch combined’. If the author believes that piece of nonsense, socialism’s perennial debilities become easier to understand.