Warning: session_start() expects parameter 1 to be array, string given in /home/customer/www/scottishreviewofbooks.org/public_html/wp-includes/class-wp-hook.php on line 292
 Connery – Last of the He-Men – Scottish Review of Books

Connery – Last of the He-Men

In his younger days, Sean Connery had the physique of a Greek god. Is his appeal to men based on attitudes equally ancient?

What is it with men and Sean Connery? That’s what I’m pondering after finishing Christopher Bray’s Sean Connery: The Measure Of A Man. The title is slightly misleading. This book is not an intimate exposé of Sean Connery. How could it be when, as the author tells us with disarming honesty, Sean Connery contributed nothing to it, “few people were willing to talk about having worked or dealt with Connery” and Bray himself has “no wish to know Sean Connery”? This last is a fib. Bray may find Connery’s sporting obsessions boring and his nationalism “offensive and stupid”, but if you claim, as he does, that when Connery dies, “for a while, at least, the world will make a little less sense”, clearly your ultimate dream is a sibilant “Chrishtopher! Lunch?”

The book will not damage Mr Bray’s luncheon chances. It does not pry. Indeed, apropos Connery’s private life, it barely speculates, mentioning only in passing, as if anxious not to offend, the breakdown of Connery’s first marriage, the deaths of Con-nery’s parents and his dabbling in emotional plumbing through “orgone accumulation”. Judging by the bibliography, no book, no newspaper article, no magazine spread has gone unmined. He analyses Connery’s changing speech patterns. He knows Con-nery’s golf handicap in 1967. He has certainly done his homework.

Essentially, this book is about Connery’s films and film performances, the former dissected chronologically amid plenty of those darting references beloved of the dedicated film buff. “Good Lord!” you might well say in indulgent, if faintly weary, tones if you spent an hour or two in the pub with Bray. Was The Anderson Tapes really a “meat-and-potatoes heist picture laid over with a Kafka-esque conceit about the paranoia induced by the surveillance society”? Well, I never.

To quote another famous, if fictional, Scot “for those who like that sort of thing, that is the sort of thing they like.” Yet before Mr Bray summons Oddjob to hurl his bowler hat, I’m not dissing his book. On the contrary. If your subject’s personal life is off limits, why not offer instead a lively, quirky filling-in of the blanks through his work? And since Connery’s own Being A Scot is a nationalist tome which, so one reviewer noted, says almost nothing about his film career at all, Mr. Bray has plenty of room. He uses that room well, setting out Connery’s films and characters in the appropriate context with admirable gusto. Moreover, with an irreverence he never quite manages to bring to the man himself, he cheerfully labels the films “as big a bunch of junk as the Bond producers ever threw together” (Diamonds Are Forever) or “somewhat less than spectacular” (The Hunt For Red October).

Yet the most fascinating thing about this book is not the information. The fascination lies in Bray’s bold assertion that “every … guy born in the past half-century” wants to be Sean Connery and that every woman wants to sleep with him. It’s this belief – unquestioned throughout – that surely encourages publishers to pay authors to beat the same unforgiving ground. But is it true?

I started my research at home. I asked my husband if he would like to be Sean Connery. He looked alarmed. “Would you like me to be?” I looked deep into myself. “No,” I said. Looking at the photographs in the book. Connery was, and still is, good looking. I don’t even take exception, as Christopher Bray does, to the monobrow. But the 1970’s moustache is horrid, and if Zardoz really was nothing more than a study in “the physical beauty of its star”, the Spartacus-type publicity picture is a bit iffy.

Actually, I think the physical Connery is a male fantasy. I don’t think men see Connery himself. Rather, they project onto him what they think women want to see. Hence, without a hint of irony, Bray gushes that Connery embodies “lethal grace” and “fatal elegance”. That’s not all. He’s “a dead ringer for Mi-chelangelo’s David or Leonardo’s Vitruvian Man”, only he looks “less like a man than a Greek god”. The prose purples. Connery is a man whose hands, in Dr. No, “dangle, claw-like in the air, in readiness to swat away their prey after they have given of their pleasure”. As a grand finale, in the caption under the Marnie photograph, Bray tells us that Alfred Hitchcock saw “through the glitz of Bond to the barely socialised sexual predator beneath”. In your dreams, Christopher Bray!

Beyond the prose, it boils down to this: men rightly or wrongly see Connery, or Con-nery/Bond if they can’t disentangle the two, as the last of the he-men, an alpha male who can still get away with behaviour in which Connery himself may well never indulge but which men long to emulate. A “barely socialised sexual predator” will – thrillingly – bang the table for his dinner and leave the loo seat howsoever he damn well likes. A Greek god spits on quiche and ironing. Hands ready to “swat their prey” don’t support a partner in an antenatal class while their owner em-pathetically breathes to whale music. And then there’s that last guilty secret: despite the furore, despite the lectures, despite the universal condemnation – and despite Bray’s detailed and slightly disingenuous insistence that Connery was misunderstood – men find it reassuring to hear somebody say that women can be bloody irritating and although “it’s not good” the rights or wrongs of striking a woman “depend on circumstances”.

This does not give men a licence to slap. But Connery does allow them a twinge of nostalgia for those times before feminists got going with the castrating irons. In short, whether it’s Connery’s intention or not – just looking at their idol makes men feel more like men.

Bray skirts around this thorny issue in his introduction. Instead, he focuses on the “increasingly second-hand lives” that dedicated moviegoers like himself lead. He freely admits “a need, in a way, to be that other being”, the other in his own case being a “big man … light on his feet” because Bray himself is “clumsy and heavy-footed”. “If part of wanting to be Connery is wanting to be Bond,” Bray says, “the whole of wanting to be Bond is wanting to be Connery.” So whether Connery is Bond, Shalako, Zed of the “prodigious erectile function”, William of Baskerville or Professor Jones, his main role is as the ultimate male avatar, now and for all time. I’d like the author to have dug deeper into this, but then the book is about Connery, not about Bray.

Also, I wonder. Is Connery really as unique and his appeal as long-lasting as Bray is busy persuading us? The movie world is filled with action heroes, both rugged and suave: Burt Reynolds, John Wayne, Paul Newman, Bruce Willis, Russell Crowe, Brad Pitt. To these must now be joined John Hamm of Mad Men, who received a ‘sexiest man alive’ accolade in 2007 – Connery was PEOPLE Magazine’s sexiest man alive in 1989 at the age of 59. Hamm has that all male look. His Don Draper is, in his own way, quite as icily cool as Bond and he doesn’t even have any gadgets unless you count whisky and cigarettes. Stick him next to Connery’s Bond and he does pretty well. But it’s true: he doesn’t do better. Perhaps Bray is right. Perhaps nobody but Connery has that solidity of body (best displayed, according to Bray, in the fight scene in The Untouchables) and ‘giant-killer’ stature which turn a moviestar into a moviegod. I’d love to see Don Draper take his children to see Dr. No or Thunderball (in Mad Men we’ve got to 1964) and watch him watching Connery. Would he, like Bray – although secretly, obviously, as the Draper character dictates – turn starstruck? Bray might usefully have devoted a whole chapter to how ‘the measure of a man’ has changed between Hell’s Drivers (1956) and The League Of Extraordinary Gentlemen (2003), and how men feel about that.

As it is, the reader feels for Bray in his struggle to tell us something new about Con-nery. Certainly, the author does his best, and in doing so offers two sharp insights. The first is that Bond’s film appeal, an appeal the books certainly don’t exhibit, is aspirational. Connery’s Bond “offered you a way of becoming classy while remaining classless”. In other words, you could wear a dinner jacket without being a stuffed shirt. The second insight is political. Why, Bray wonders, did Connery’s ambition to play Bothwell in The Immortal Queen come to nothing, since this might have done more for Scotland’s cause than “backing any number of SNP election candidates”?

And that, I suppose, is going to be the trouble with all Connery ‘biographies’. There’s a Connery-sized hole in them that cannot be filled by a fan, however diligent. As a consequence, Bray has written a book about film, which is fine, but not the book diehard fans crave. Treat em mean, keep em keen, eh, Sir Sean? Well, if Bray is anything to go by, it’s certainly working. 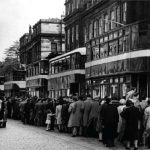