Warning: session_start() expects parameter 1 to be array, string given in /home/customer/www/scottishreviewofbooks.org/public_html/wp-includes/class-wp-hook.php on line 292
 Volume 3 – Issue 3 – Gallimaufry – Scottish Review of Books

The ongoing vogue for lists of all sorts has not noticeably advanced the cause of civilisation. In most cases these spurious hierarchies are a distraction from the arts, not a new way into them. Edwin Morgan’s muse however vibrated into life with the publication two years ago in The Herald of a list of the people’s favourite paintings held in Scottish public collections. Beyond The Sun partners glossy reproductions of The Herald’s top ten with a poem on each entry by Morgan. As Alan Riach puts it in the foreword, this short collection represents “Morgan’s ultimate assertion and affirmation of the value of art, its permanent sense of preserving the example those energies set.” Dull reverence is by no means the order of the day however. Of Raeburn’s smug skater, he writes, “Wouldn’t it be good/If the god of thaws pulled that icy rug/From under him, to remind his next sermon/What it is that goeth before a fall.” In the case of Rembrandt’s martial Man In Armour, Morgan doesn’t appear to like the painting at all, if for reasons other than painterly ones: “You are great; even a loss from you’s a gain./But do not trivialise the death of men.”

Perhaps the King is bald from reading too much modern philosophy and tearing his hair out, the only proportionate response. To be fair to Walter Perrie, his short work on a philosophy of language avoids the synapses-wrecking jargon of his peers. He takes pains to be clear at all times. The upshot of his decision not to hide behind a screen of academic gobbledygook is that half of what he says seems so obvious as to be not worth stating, and half so coiled round itself as to be not worth pursuing. Anyway, we can boil down his argument, at the risk if distorting it, to this: word-forms require a language-act by a person to have a meaning. Words and their meaning are not independent of us; they don’t have their own existence, although that is how we, as individuals, first experience them. In other words, language is the tree in the forest that only truly falls if there’s someone there to witness it. Basically an elaboration of Bertrand Russell’s and Wittegenstein’s work, The King Of France Is Bald is just the sort of philosophy you’d expect a poet (as Perrie also is) to explore, as it enthrones language’s users, reducing language to a vassal.

“Most people don’t know what a social entrepreneur is,” writes Laurence Demarco, an example of that obscure breed. I would have said it sounds a little like someone who buys and sells people; in fact they basically run organisations with a humanitarian bent, in Demarco’s case, helping disadvantaged kids. As part of his job, Demarco pens a short weekly meditation for an industry bulletin, a diaristic, philosophical musing with a humorous bent. You’ve Got To Laugh collects together five years’ worth of Demarco’s thoughts and a surprisingly winning effort it is too. A man of a certain vintage, Demarco shares his health woes and growing feeling that he lives in a time whose culture he has little to no sympathy for. Instead he digs into his memories, recalling his first teenage kiss with an Italian chip shop girl who collected jam jars and phoned random numbers for a chat. Watching late night Star Trek, a drunk, broken friend phones for advice and rather than turn the TV off, Demarco dispenses advice on the basis of Spock’s logical maxims. He embarrasses himself in front of John Le Carre and may be the only socialist in the Western hemisphere to express sympathy when Jeffrey Archer was jailed. In other words, he’s a one-off.

What marks Frederic Jameson out as a writer is the genuine sense of oddness that inhabits his writing. Whereas other writers work hard, torturing their imaginations to evoke the strange, Jameson bangs out deceptively straightforward prose that releases, one eventually perceives, a subtle miasma. My Life As A Man is of a piece with his other work. On the surface it’s a rites of passage story that takes the form of a road movie narrative. But darker undercurrents thrash beneath. Jameson’s hero, eighteen-year-old Harry, has been kicked out of his home by his mother’s boyfriend and through no fault of his own lost his first job after barely a week’s work. Understandably frustrated he jumps into his boss’s car and drives off. The car has a passenger, Mrs Morton, the boss’s wife, a woman who sits in the same car outside her husband’s factory everyday. Oddly detached, she doesn’t object when Harry, twenty years her junior, zooms away with her. Before long a gang of heavies are after her, in pursuit of a mysterious briefcase in the boot. Matters become truly odd though when Harry and Mrs Morton hide out in a remote rural cottage with a couple who it becomes clear have plans for the runaways.

This fresh, original, beautifully written collection of short stories from the winner of the 2006 Scotsman/Orange short story competition is nothing less than a celebration of the form itself. Clio Gray’s brand of historical realism is well suited to this format: economical to the point it is both oblique and punchy. The narrators are usually male and have done something wrong: in one story, a rival for brotherly love is apparently murdered; in another, a soldier is condemned as a traitor and has his ears lopped off; a third story concerns a lonely man who exacts revenge for the death of his adopted son due to another’s carelessness. Death doesn’t quite stalk these pages as tramp heartily through them. Gray’s interest in times past takes in a knowledge of bodily decay as well a sense of very local colour and of consequence, whether we are in the present day or Napoleon’s era. One small comment – every story is told in the first person, which can lead to a lack of variation in tone. That said, this is a highly impressive collection.

Vegetarians, look away now. Near the beginning of this novel a lengthy description of the specialist delicacies offered by a new Shanghai restaurant called This is Living. Hong Kong-based writer and journalist Nury Vittachi’s descriptive skills are such that a restaurant which serves only living things for food is entirely plausible. In common with the best satirists, his fantastical take on the world is only a heartbeat away from the real one. Joyce is a young Englishwoman working in Shanghai for two employers: CF Wong, a feng shui master, and Lu Linyao, manager of the Shanghai Vegetarian Café Society, whose owner is a fanatical animal rights activist. When Wong attends the inaugural opening of This is Living, he and Joyce are caught up in a gruesome hijack. On their way to assassinating two presidents visiting the city, an extreme animal rights group force each restaurant guest to undergo the same fate suffered by the living beings on their plate. It is, of course, up to Wong and Joyce to save the day, and while this traditional pairing (older, cynical male partnered with young, naïve female assistant) may have seen better days, this is still a quick, sharp and intelligent read.

All credit to Tennant for boldly attempting to wrestle a genre from those endless queues of thirty-something women all waiting to bore the rest of us about never finding Mr Darcy, or not marrying Mr Darcy when they had the chance but some other poor sod by mistake. Scarlett, the sixty-something narrator of this ‘diary’, has fallen in love (or lust) with a younger, married man called Alain, who runs a rapidly diminishing tile-design business with his wife, Claire. Said narrator has also discovered that her fairly dingy two-floor flat in ‘Maida Hill’ is now worth three-quarters of a million pounds, such is the madness of the London housing market. She decides to sell up, buy something smaller and live off the equity. Alain becomes caught up in her plans as his older paramour desperately devises ways for them to be together. This might be a gentle satire more in the Austenite vein than more hardcore, modern versions, but both its disgust at a world that relentlessly ignores older women, and its fight back against such imposed invisibility, run right through it, making this light-hearted look at ageing both witty and profound, a rare feat.

Bateman offers us a double explanation of the meaning of “soirbheas”: a “fair wind on the sea (Skye)” or “wind, flatulence (Argyll)”. One meaning is romantic, the other down-to-earth, even scatological. This doubleness characterises many of Bateman’s simple, beautiful poems, from life and death in ‘Mac’ (“It was a premonition of your death/to be speaking to you without your knowing”), to animals slaughtered for disease, not food, in ‘Sacrifice’. She moves from desire and loneliness in ‘Chinese Bowl’ (“Were I to love a man again/how can I know if my world would hold/or would I once more get lost in the crack/between my expectations and lack of courage?”), to ageing in ‘So Spoke the Old Woman of Beare’. That some of the titles echo Sylvia Plath (‘Mirror’, ‘Daddy’) might lead the reader to expect more violence, more anger, but these are essentially poems of reconciliation and acceptance, an acknowledgment of the doubleness in life and its irreconcilability. Often moving, these poems about ageing, family and relationships, hint at roads not travelled, even though the destinations may often work out better than planned.

This unsentimental yet moving novel is in many ways a classic father and son tale, though the two protagonists involved are not related. Lachlan McCready is a lonely, middle-aged bachelor and local doctor for the isolated Rassaig village during the war. He has become accustomed to his single life and thwarted ambitions when Frank, a young Jewish evacuee who has lost most of his family, comes into his life. Housed within an unsuitable and violent home, Frank is in danger and has to be rescued by McCready, who takes the young boy into his own home. The two form a delicate yet strong bond that will last even when the war is over and Frank can leave for boarding-school and the beginning of his adult life. Paralleled with their story is another old favourite: that of love crushed. Land Army girl Gail, who has arrived in the village from down south, falls in love with local man, Angus, and struggles with her guilt at betraying her soldier fiancé. Cannon’s prose style is unshowy and precise, the very opposite of the dilemmas and emotions that face his characters. The disparity between the two make for a considerably affecting story. 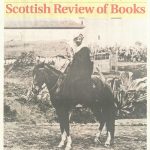