Warning: session_start() expects parameter 1 to be array, string given in /home/customer/www/scottishreviewofbooks.org/public_html/wp-includes/class-wp-hook.php on line 303
 The Atkinson Diet – Scottish Review of Books

MOTIONALLY WEIRD. KATE ATKINESON’s third novel, boasts several suspicious deaths. An English lecturer offed by falling volumes of the Shorter Oxford English Dictionary; a “harmless wee wifie” who may or may not have met a natural end at an old folks’ home; three murders by drowning (one matricide, one corpse in a silver lamé evening dress, and one discovered on a fishmonger’s slab with a lemon in its mouth); a student who overdoses after aborting her lecturer’s baby; and a dog-loving American who takes a fatal plunge over the banisters in an unseemly tussle over a Weimaraner. Mercifully, the latter two exits are subsequently reversed: the first after protests from Nora, the audience of this story-within-a-story; the second when Effie, the storyteller, sets fire to a page from a novel-in-progress (a story within the story-within-a-story) which spookily describes the tragic sequence of events.

In the light of all this, Atkinson’s decision to turn to crime writing in Case Histories, and her latest novel, One Good Turn, seems at once an obvious progression and a move of some artistic risk.

Atkinson has always played games with genre, flirting with historical fiction, family saga, sword and sorcery, doctor-nurse romance, fairytale, BS Johnsonesque experiment, and classical myth. Emotionally Weird contains five works-in-progress, each a pastiche of a different kind of writing, one of them a detective novel that Effie produces for Martha, her university creative writing tutor. An unhappy choice: “the least reputable genre there was, according to Martha (‘Why? Why? Why?’) and I had to pretend to her that crime writing was a postmodern kind of thing these days, but I could tell that she was-n’t convinced.”

Martha’s scepticism is understandable. For all the ingenious variation of contemporary crime fiction, certain rules are non-negotiable. The certifiably dead do not walk again. Characters do not take away days in different centuries. They do not get kidnapped by Artemis, or turn out to be Neptune’s miscegenated spawn. They do not remember life in their mother’s womb. These conditions alone would seem to impose intolerable constraints on Atkinson’s imagination.

Her Whitbread-winning debut, Behind the Scenes at the Museum, which begins with Ruby Lennox recounting her conception, established Atkinson’s distinctive voice: frivolous, playful, unmistakably feminine, mixing pawky social realism with flights of comic absurdity, cutting through the froth with sudden poignancy, marshalling weighty ideas with a feather-light touch. Few contemporary writers manage to be so sunny and at the same time so dark. In Behind the Scenes at the Museum Ruby discovers that she has been blamed all her life for drowning the twin she never knew she had. Human Croquet concludes with the end of the world. In ‘A Temporal Anomaly’, one of the stories in Not the End of the World, Hades’ chariot overtakes a woman motorist on the M9. She lives as a ghost, invisible to her family, until, for no apparent reason, corporeality is restored. Then it happens again.

Atkinson’s books are filled with absent mothers (even when physically present), lost children, family secrets, twins, doppelgangers, unlikely coincidences, out-of-body experiences and dizzying leaps forward or backwards in time. Frivolous she may be, but the frivolity coexists with a flurry of existential panic. The breezy cruelty of Atkinson-land, the grotesque accidents that are at once unpredictable and part of some almost-discernible pattern, echoes Muriel Spark. (Not for nothing is the hero of her two most recent novels given the surname Brodie, we surmise.) But where Spark’s pattern is Catholicism, Atkinson offers us a sort of collective unconscious: a whimsical soup of echoing thoughts and fancies, literary and Biblical quotations and punning gobbets of popular culture swilling around in her characters’ heads. It’s a device which manages to be both anti-naturalistic and slyly reminiscent of lived experience.

Case Histories can be read as an attempt at a postmodern kind of crime novel: a flagrant exercise in pastiche, with the clichés of the genre (televisual and literary) turning up like so many broad winks to the reader. Broadest of these is the battered private eye who acquires another bruise every time we meet him. Jackson Brodie is our old friend the middle-aged, chain-smoking, chivalrous loser. He is tortured by tooth-ache, punched by his ex-wife and the man who has cuckolded him, hit over the head with a gun; his brakes fail; his only child is removed to the other side of the world; and his house explodes “just like that”. At the end of the novel, in an equally preposterous reversal of fortune, he inherits two million pounds from an elderly South African cat-lover called Binky. As one hackneyed and/or ludicrous event follows another “just like that”, Atkinson seems to be teasing her readers: “you swallowed that one? OK, how about this?” And the remarkable fact is that we do swallow it, whether she’s writing a realist crime novel or a time-travelling fable, because the sheer cheek of her narrative twists and turns is sweetened by a relentless accretion of human detail so that even the most self-conscious of readers succumb, suspending their disbelief.

Case Histories interweaves three mysteries, a vanished toddler, a murdered teenage daughter and a domestic manslaughter, with the back-story of Jackson’s own family tragedy. By the end of the book three out of the four deaths are solved, without feeling resolved. There is no easy correlation between technical guilt and moral responsibility; ‘whodunnit?’ remains a debatable point. In the case of the vanished toddler accidentally smothered by an older sister, ultimate blame seems to lie with the sexually-abusing father. But with the stabbed teenager and the axe-murdered husband, the chains of causality are disconcertingly arbitrary. Meanwhile the lack of any identifiable culprit in the rape and murder of Jackson’s sister creates a vacuum that his brother is compelled to fill, blaming himself for not giving her a lift that night, and committing suicide in remorse. Throughout the novel, Atkinson’s focus is less on the crimes than on their repercussions: what it means to live in a world where such terrible things happen. The principal characters are haunted by the impossibility of protecting the people they love: Theo, who arrives too late to save his eighteen-year-old daughter; Jackson, doomed to imagine the sexual violence that might be visited on eight-year-old Marlee; his brother tormented by Niamh’s murder; Amelia’s and Julia’s lives overshadowed by their little sister’s disappearance 35 years before. Undoubtedly, crime is a straitjacket for a writer of Atkinson’s heterodox gifts, but in Case Histories there’s a calculated trade-off: those vertiginous imaginative leaps in exchange for a sustained emotional intensity.

With her second excursion into crime she takes a different tack. One Good Turn is as dexterously plotted as one would expect but, instead of three intricately-overlapping but essentially separate stories, all the loose ends lead back to a single Mister Big. The action begins with a road rage attack in Edinburgh during the Festival, an incident witnessed by five hitherto unconnected characters: Jack-son, now sleeping with Julia and living the life of the idle rich but as luckless as ever; Martin, a writer of “old-fashioned soft-boiled crime” novels featuring a gung-ho amateur sleuth called Nina Riley; Gloria, the put-upon wife of a corrupt property tycoon about to be taken down by the fraud squad; Archie, 14-year-old son of newly-promoted Detective Inspector Louise Monroe; and Archie’s schoolfriend Hamish. Before long the developer is in intensive care hovering between life and death, a contract killer roams the streets of Edinburgh, a Russian dominatrix is chumming-up to Gloria, a has-been comedian is beaten to death in the writer’s flat, a beautiful corpse floats in the Firth of Forth, and Jackson has acquired a police record.

Where Case Histories is choked with family love and loss, One Good Turn is subtitled “a jolly murder mystery”. This doesn’t preclude some meaty themes: the amorality of the underdog; the blurred line between symbiotic exchange and exploitation in our dealings with eastern European migrant labour, but the novel seems less dark than anything she has written. Despite a couple of ludic accidents, a doppelganger and some comic-cruel twists of fate, this doesn’t feel quite like Atkinsonland. Her trademark nerviness is oddly muted. The characters are less emotionally overwrought. Without Marlee to worry about, Jackson is not nearly as heart-wrenching as he was in Case Histories. Louise’s exasperated tenderness for her teenage son and her half-acknowledged courtship with Jackson are deftly done, but the novel’s most touching moment is the death of her cat.

The most vulnerable character is also the least appealing: Martin the crimewriter. As fictional challenges go, he’s a beezer: a complete nonentity. The most memorable fact about him – that he was once a monk – is a publicist’s fabrication, but his efforts to put the record straight convince no one. Like Jackson, he’s a stock character made flesh through sharply-observed detail: the sort of man who downloads ‘Birdsong’ as his ring-tone and is “pleasantly surprised by how authentic it sounded”. We all know a Martin, and go out of our way to avoid him. Ultimately Atkinson is just too good at establishing his nullity for us to enjoy so many pages in his company, bearing witness to his bloodless domestic fantasies and his longing to write a serious, intelligent (i.e. non-crime) novel: “Not Nina Riley obviously linear narratives were as much as she could cope with but rather something with intellectual cachet (something good).”

Second time around, the in-jokes about crime writing seem less witty, maybe even a little sore. There are more broad winks to the reader: the beatings Jackson collects; the criminal headquarters which vanishes without trace; and the comic climax, when the baddie’s brain seems to grind to a halt “from the effort of trying to work out why all the people he wanted to kill were in the same room together” – but the metafictional games feel tired, as if the limitations of the genre have begun to cramp her style. There is much to enjoy: most notably Tatiana, the feminist dominatrix; and Gloria, lifelong stooge of her monstrous husband, belatedly discovering what it means to hold power in a relationship. Atkinson is incapable of writing an unenjoyable novel, but One Good Turn may delight new readers more than it satisfies longstanding admirers. Overall it reads like that least postmodern of literary forms, the crime sequel.

Ajay Close is the William Soutar fellow in Perth and Kinross

My Middle Name is Patrick 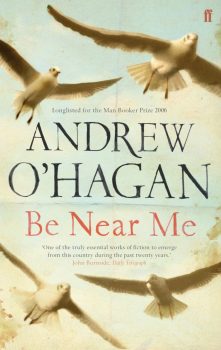