Warning: session_start() expects parameter 1 to be array, string given in /home/customer/www/scottishreviewofbooks.org/public_html/wp-includes/class-wp-hook.php on line 307
 Peace Work – Scottish Review of Books

EVERY WAR IS the defining moment in the history of those who fought them, the instant when everything changed. But if their war was the one to end all wars, peacemakers undergoing the same life-changing transition tend to universalize their peace process as the one that promotes all others. Both end up disappointed.

It perhaps now seems tragically ironic that South African peace negotiators travelled the conflict zones of the world after 1994 offering their settlement as a template, when they left the problem of frustrated expectations at home as the result of the new government’s refusal to engage in massive social redistribution, which today manifests itself in the murder of African migrants in fierce competition for jobs, housing and basic services. Northern Irish peace negotiators ended up in Sri Lanka, Israel-Palestine and Iraq trying to universalize the process that culminated in the Good Friday (or Belfast) Agreement in 1998. That it took just over nine years for a relatively stable government to emerge from this peace settlement, as the accord underwent at least three iterations, highlights that the practice of peace is often as protracted and as difficult as the conduct of war, which should restrain anyone from believing that their peace settlement is permanent and is the one to persuade all others. Peace processes require policy management long after the final shots are fired and take generations to embed themselves culturally, socially and politically.

Peace processes are owned by everybody involved – and are the more stable the wider the public acclaim in which they’re held – but they often go in unpredictable directions. Leading back to war is the most obvious unintended consequence, but if they survive, the benefactors are often not those initially intended. Those who immediately inherit from the process can themselves eventually be replaced, in ways that can improve the prospects of a stable agreement (for example, Northern Ireland) or which undermine and threaten it (for example, post-Communist Russia). Western-led democratization on the West Bank gave Hamas an electoral mandate; the peace process in Russia led to an explosion of organized crime and the constitutional, middle-of-the-road political parties which the Good Friday Agreement was designed to promote, led by David Trimble and John Hume, had to undergo political annihilation before a stable government could emerge from the process.

It should be no surprise that sometimes the extreme parties are the main deliverers of peace. It is the groups with the arms – or which have armed groups only partially disguised behind their shoulders – that come to realize that the costs of continuing the conflict are greater than the costs of making a settlement, and have the influence over the armed groups to desist from further killing. When extreme parties can claim a moral high ground, despite of, or perhaps because of, their campaign of violence, there is no ethical repulsion in voting for them, or at least, there is insufficient moral unease to prevent an electoral mandate establishing itself as the new force driving politics. This is not always the case.

Moderates can survive for long periods, as modern-day Rwanda reveals, and extremists on all sides can continue to push for their first choice preferences and resist a second-best compromise peace deal, something that blights the peace efforts today in Sri Lanka and Israel-Palestine.

Northern Ireland’s peace process is one of those where the extremes have moved into the centre, and Sinn Féin and the Democratic Unionist Party are making a good show of it. This remark is not just a pun referencing the highly dramatized ways in which they strung out the final agreement to share power but also a judgement on the quality of the job they have done since. The first year of their pact coincides in 2008 with the tenth anniversary of the signing of Good Friday Agreement, and analyses of the peace process not unnaturally tend to concentrate on the latter rather than the former, since the pact took most commentators by surprise and not enough time has passed for its records to be written. Interestingly, since neither of them now has anywhere else to go – the extremes to the fringes of Sinn Féin and the DUP are not realistic options – there is now a commitment to make the deal work that is as great, if not greater, than the moderate parties could ever have supplied. Sinn Féin and the DUP have successfully closed off all options; the Good Friday Agreement is the only game capable of being played. Bystanders may rail and rant at their performance, but frankly no one else is in the same league.

The books under review encapsulate what to outsiders are some of Northern Ire-land’s oddities. Their focus supplies a mix of church and politics, of liberal, ecumenically-minded religion and firebrand evangelicalism; there is a combination of thoughtful journalism, insider exposé from political advisors, and serious social science analysis. The writers offer interventions from London, Dublin and the US. This blend neatly represents both the scale of Northern Ireland’s problem and the measure of its achievement.

Religion is clearly the only place to start. Ireland, Swift once remarked, had enough religion to make it hate, not enough to make it love; the Irish Association, established in 1938 to address cultural, economic and social relations on the Island, thought in 2003 that religion had been nothing but trouble. In a society where religion is perceived to be part of the problem, it has proved very difficult for the churches to become part of the solution. In From Ecumenism To Community Relations, Maria Power’s analysis of the ecumenical movement is the latest to champion this small and unrepresentative section of the church-going population. What gives the analysis special weight is her demonstration that to have any influence at all, liberal churchmen and women had to shift from ecumenism to community relations; that is, to denude their peace work of religion. They promoted peace and reconciliation by trying to improve community relations in secular society, which largely confirmed ecumenism’s irrelevance. I well recall a leading Presbyterian minister when he was a trainee, telling me that he was fully in agreement with ecumenism so long as it was restricted to Protestants. For religion to become a site of reconciliation not contestation, the focus needed to shift from ecu-menists to evangelicals.

This is the immense value of Gladys Ganiel’s book, Evangelicalism And Conflict In Northern Ireland, which, through rich ethnographic detail, documents the changes taking place within the largest constituency of Northern Irish Christians. What has been important to the alliance between Sinn Féin and the DUP has been the political fragmentation of conservative evangelicalism. I do not mean by this its liberalization theologically but the move away from unreconstructed Unionism. Not only – apparently – did God tell Ian Paisley that His will dictated a deal on devolution, many evangelicals had moved away from Paisley’s Free Presbyter-ian Church into more politically pragmatic positions, or were never attracted by him in the first place. The fact that Paisley has nonetheless been pushed aside because it was felt he was a brake on further pragmatic compromise indicates the enormity of the shifts occurring in conservative evangelical politics in the North of Ireland. It is the growing number of pro-peace evangelicals that demand our attention not the ecumenists. How they shape up to more traditional evangelicals in the future is one of the interesting questions in the sociology of religion in Northern Ireland – which has always been more concerned with conventional evangelicalism – that will likely help to determine the stability of the pact with Sinn Féin.

One of the virtues of the sociology of religion, however, is that it has always taken the role of religion in Northern Ireland’s conflict very seriously. To do so seems self-evidently right: religion was not the substance of the conflict, but its mediation. It was never about religion but religion was the form through which it was experienced. The same cannot be said for much political science analysis. The primacy of politics is a prison as much as a prism. Christopher Far-rington’s edited collection, Global Change, Civil Society And The Northern Ireland Peace Process is a significant advance.

After reviewing the implementation of the Good Friday Agreement, ten years on, Farrington’s introduction sets up three kinds of analysis. The first is traditional politics, perhaps of the worst kind, for contributors are largely oblivious to factors outside the disciplinary domain of political science and to the vast literature from other subjects. The other types of analysis represented in the book redeem it immeasurably. Parts II and III examine the impact of civil society on the peace process and documents the contribution of women’s groups, Third Sector bodies and the churches to the peace process. An explicit contrast is made between the contribution of civil society groups toward stabilization of the Agreement and the novel forms of voting systems introduced in the devolved parliament designed to introduce balance between ethnic voting blocs. The former win all the time for me; the latter delay the formation of ‘normal’ class politics and reproduce the ethnic politics of the past. Asking the Women’s Coalition, for example, to declare whether it was Protestant or Catholic, Unionist or Nationalist, failed to grasp the changes afoot in Northern Irish politics represented by the success of women’s groups in voting in a women-only party. That the Women’s Coalition subsequently folded represents an opportunity lost to cement these changes, in part because of parliamentary voting systems that do not reflect social structural changes.

The books with widest appeal will predictably be those by Powell and de Bréadún. De Bréadún is the former Northern Editor of the Irish Times and now its political correspondent. The Far Side Of Revenge is a very descriptive account, of the travails of the peace process up to the DUP/Sinn Féin power-sharing alliance. There is a long tradition of journalists writing up their sojourn in Northern Ireland. They are of a type: factual, descriptive, heavily focused on the ‘main players’ and key politicians, short on analysis and the intellectual apparatus of scholarship but wonderfully written. Someone like Brian Rowan, retired security correspondent for BBC Northern Ireland, because he is local, gets immersed in the detail at the expense of the prose. Like Rowan, de Bréadún was well-respected by the IRA. He is both inside and outside, local and foreign, and his book is a delight. What makes it special is that as an insider to politics in the Irish Republic, it gives an account of the peace process from across the border, with fascinating glimpses of Southern politicians.

Jonathan Powell’s book is very much the view from London; indeed, from Downing Street. It covers the same ground, the same people and events, but the perspective is naturally different. There is not the same literary genre of policy advisor exposés and one wonders why he was given permission to publish the book when some of the fine print is so potentially dangerous to the stability of the devolved government. Talking recently to a leading Republican, he described the book to me as pure ego. It may be pure greed. But it was an act of supreme irresponsibility to write it. It is dedicated “to the people of Northern Ireland who have suffered so much”, but if he cared that much, he should have spared us this kind of book. 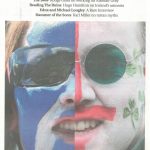