Warning: session_start() expects parameter 1 to be array, string given in /home/yourband/public_html/srb.swddev.com/wp-includes/class-wp-hook.php on line 286
 Identity Parade – Scottish Review of Books

JACKIE KAY IS ONE of those autobiographical writers whose work can also be read as a biography of the times. Race and nationality; blood and belonging; how it feels to be black and lesbian in a land as white and narrow as Scotland can be; what it

means to grow up in a country where “Angela Davis is the only female person/ I’ve seen (except for a nurse on TV)/ who looks like me”: these are her themes and our themes too, of course. Who should know better than the Scots that we are all defined by what we class as ‘other’?

Darling brings together Kay’s four adult collections (five poems excepted), a taster of each of her four children’s collections including the brand-new Red Cherry Red, and 14 new poems: a life’s work in more ways than one. Kay’s readers know all about her black Nigerian father, the white Highland mother who gave her up shortly after birth, her adoption by white Glaswegian Communists, her sexuality, her son, the break-up of her long-term relationship with poet Carol Ann Duffy. Even when she is not taking the raw material of her life and turning it into poetry (or fiction or drama or journalism), there is a sense in which her work remains autobiographical. As a child with no memory of birth mother or father and no contact with Africa, she forged an identity out of fantasy and conjecture and those few black faces bobbing in the soup of popular culture. As a poet, she often seems to be engaged in an extension of the same project: the construction of a personal mythology through the charting of experiences not marked on the majority’s map.

From the start Kay showed a ventriloquist’s ability to bring widely diverse characters to life on the page. The Adoption Papers (1991), her first collection, gave voice to the birth-mother she had never met, and created a series of sibling ‘others’: gay miner, transvestite, Aids sufferer, a child born to a lesbian couple by donor sperm. Other Lovers (1993) and Off Colour (1998) added to this family, inter alios, agastarbeiter; a 13-year-old slave; a black pickpocket transported to Australia; a ‘Hottentot Venus’ exhibited to the crowds in nineteenth-century Europe; and Joy Gardner, the black woman who died at the hands of police in 1993 while her five-year-old son looked on.

These works sing with the clear notes of justified anger, but Kay’s more interesting poems to this white reader, at least address the distorting effects of racist culture on everyone in its dominion, black and white, and explore the play between idealisation of her black roots and self-doubt in the poet herself. Other Lovers contained several poems-as-blues lyrics in the style of Bessie Smith, a key influence on Kay’s childhood. Kay’s Bessie is both inspirational heroine, routing the Ku Klux Klan, and helpless collaborator: “A minstrel… /A clown. An aunt jemima” (‘Blues’). In a parallel poem, the painful ‘Gone With the Wind’ (painful, certainly, for anyone who’s met Kay and responded to her warmth), she renounces her own smile, overwritten as it is by the reminder of Scarlet O’Hara’s beaming black servant.

Translated to a Scottish context, this ambivalence about her own identity, the awareness that how others see her is inescapably part of who she is, is compounded by further layers of belonging and exclusion. Writing in the accents of working class Scotland, she is at once accessing her own voice and conjuring that of the white population who will never see her as one of their own. The magnificently thrawn old women she brings to life in a series of funny-sore poems and stories are both victims and oppressors. In the delicious ‘Maw Broon Visits A Therapist’, the cartoon matriarch complains about life as a caricature. ‘Where It Hurts’ delivers an ebulliently comprehensive summary of national ills, ending with the prognosis “a fucking great fucking big death”. But there’s no comic sweetener to ‘My Grandmother’, the poem chosen to preface Darling, with its chilling line “There’ll be no darkie baby in this house”. As ‘Somebody Else’ concludes, “It’s no laughing matter going about the place/ all the time being somebody else:/ people mistake you; you mistake yourself”.

But to characterise Kay solely as a channeller of multi-cultural ironies is to ignore twinned themes that have become ever more important in her work: love and loss. Read cover to cover, Darling represents a level of intimate disclosure normally experienced only with one’s best friends. But Kay’s is and always has been a wholly unneurotic voice, capable of simultaneously inhabiting a feeling and examining it with absolute clarity. Her second collection of short stories, Wish I Was Here (2006) amounted to an encyclopedia of separation. Her fourth poetry collection, Life Mask (2005), explored the same territory to ask what becomes of the self when the defining relationship of adult life ends? Inspired by the experience of having her head cast in bronze, the mask poems offer a more inward, colourblind take on personal identity, with the various masks, heads and facsimiles (plaster, bronze, wax, rubber, pencil drawing) marking stages on the journey from grieving to transformation. In ‘Mid Life Mask’, “my face splits, fresh skin under the hard white/ …the light/ in the dark sky is cracking through;/ a new woman is out and about. Watch out”. In the 14 new poems which conclude this selected works, Kay seems poised to make good this prophecy. There are poems of erotic and emotional renewal; a love poem to her son; and hints that she may be stepping away from identity, the shifting ground she has mined so productively in the past. It will be fascinating to see what she does next. 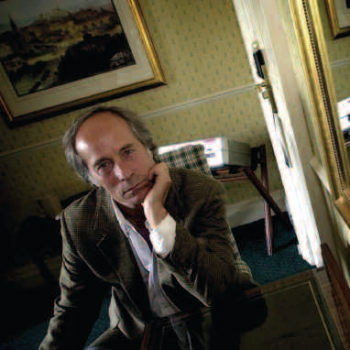 Man of the Folk