Warning: session_start() expects parameter 1 to be array, string given in /home/customer/www/scottishreviewofbooks.org/public_html/wp-includes/class-wp-hook.php on line 303
 DIARY – Scottish Review of Books

From Here to Toronto

AT this year’s Tartan Week in New York Alastair Reid – poet, translator, essayist, constitutional exile, fellow Hearts sympathiser – was asked to read a favourite poem. His original choice, from a collection entitled Fuck Scot-land by Francis Gallagher, was not apparently what the organisers had in mind. No doubt they were hoping for something which would encourage Americans in the audience, at The National Arts Club on Gramercy Park, to think well of Scotland, perhaps even to visit and play golf or research their ancestry.

A couple of days later I called on Alastair in his caravan-proportioned apartment in Greenwich Village where he needed no encouragement to give us a flavour of Mr Gallagher’s work, whose collection opens with the aperçu: “Scotland is/ the petrified vomit/ of a fish supper.” I have never read anything else by Mr Gallagher, nor have I heard anyone other than Alastair mention him. I think it perhaps fair to say, though, that he is an angry man. In ‘Homage to Scotland’ he says “being Scottish is like having sex/ with a dead camel or/ the editor of a poetry magazine.” Having never experienced either I am unqualified to comment. However, I am keen to make contact with Mr Gallagher. If anyone knows of him or his whereabouts I would be much obliged.

TALKING of Gramercy Park I once attended a party there in an apartment owned by Bill Buford, then the fiction editor of the New Yorker. If memory serves me right the occasion was the 75th birthday of the magazine and the great and the good had been summoned to New York to celebrate. I was invited by proxy, as Muriel Spark’s bag-carrier, her usual companion, Pene-lope Jardine, being loath to fly. By the time we arrived at the party it was crowded. Through the long, mini-skirted, model legs of unliterary women I spied Salman Rushdie, holding court.

We made for the kitchen where a sweaty hour was spent in the company of David Hockney, Julian Barnes and a schoolteacher from Hoboken who knew an awful lot about Eugene O’Neill. It was a sultry evening, compounded by the fact that the air-conditioning was not functioning properly. After a diplomatic sojourn Muriel indicated that we should leave. Recently, during an interview in Ontario with Alice Munro, I learned she too had been at the party, occupying the same heaving room as Mr Rushdie. Among her companions were Annie Proulx and Edna O’Brien. All of them were convinced, said Ms Munro, that Muriel had discovered that the elevator was the only place where the air-con was working and had commandeered it, spending the party endlessly going up and down. Thus myths enter the bloodstream.

IN common with other determinedly modern cities Toronto appears to believe gigantism is good for us. Since I was last there – a decade or so ago – there has been a proliferation of skyscrapers, each as aesthetically nondescript as the next. In the bar of the Westin Harbor Castle, I met a young man who said he’d given up modelling to become a realtor. He was making more money than he knew what to do with but looked glum on it. He was on his way to see the new Jack Nicholson movie, The Departed, he said, but showed no inclination to leave, ordered martinis from the Filipino barman like a bookie tick-tacking odds. On his fourth he told me that his fiancée had just dumped him. On his fifth, he said anybody could make money out of the real estate business, even me. As his sixth arrived, I told him I had urgent business to attend to. “This is not what I was put on this planet to do,” he said, meaning selling real estate. I recommended he read Richard Ford’s The Lay of the Land, the final part of the Frank Bascombe trilogy, which does for real estate what Updike did for Toyota dealers in the Rabbit books. He promised to look into it.

IN another century, I went to Montreal to lunch with the late Mordecai Rich-ler, who was then at the centre of a Rushdie-esque storm because of a blisteringly funny piece he wrote in the New Yorker about Quebec. Richler, revelling in his new-found notoriety, pretended he carried a pistol for self-protection. The image that I retain of him, though, is of him eating chips by the fistful. He was greedy for life. Now his son Noah has written a book in which he describes travelling the length and breadth of Canada, taking the temperature of the country and talking to writers, of whom there are legion. How good any of them are I can’t say but judging by the evidence in bookstores their work is given a prominence unheard of here. The same is true of the mainstream media. Canada, in order to distinguish itself from its neighbour, promotes its native culture with a conviction which shames us. Just before I arrived the shortlist for the Giller Prize had been announced and the six contenders were ubiquitously conspicuous, including on the television news. Imagine BBC Scotland or STV giving over precious airtime to the Scottish book of the year. Fat chance.

APROPOS Ford and Updike, we seem to produce few writers interested in what might be termed the privatised industries. Given the formative influence of Scots on capitalism is this not surprising? There are, of course, numerous novels which feature teachers and ministers, and even medics and journalists, but what of our go-getters, our men – and women – on the make, the fictional equivalents of, for example, Sir Tom Farmer, Brian Souter and Michelle Mone? Is none of our novelists interested in big business? Meanwhile I note that someone called Michael Lister, reviewing James Robertson’s latest novel The Testament of Gideon Mack in the Edinburgh Review, says it is “A monumental irrelevance.” Mr Lister bases his judgment of Gideon Mack – whose principle character is a minister – not on literary grounds but on what he perceives to be the current lack of influence the Kirk has on modern Scotland. “Perhaps,” writes Mr Lister, “London publishers imagine that in Scotland the indigenous population still defines itself tribally, along pre- and post-secessionist lines, and that these same Scots continue to warstle daily with the question of ‘hou mony session-clerks can be sat on the point of a needle?’” As reviews go, I can’t remember when I read one that is more perverse. Or more, dare one say, irrelevant.

GORE Vidal and I know each other of old and interviewing him again – albeit by phone – is like picking up where we last left off, him pouncing on every loose serve, me flapping a racket as the balls flash past. In an earlier incarnation he used to send raunchy faxes which my then editor found titillating. There was a coarse side to his sense of humour. I first met Gore when I invited him to Edinburgh to the Queen’s Hall where he was interrogated by Allan Massie. There were several subsequent meetings, once in the original Water-stone’s in George Street, several times at the Book Festival, and at La Rondinaia, the Swallow’s Nest, his house at Ravello high above the Amalfi coast. The last meeting took place five or six years ago when Gore’s partner, Howard Austen, was still around.

The years since have been cruel. Howard is dead, another claimed by cancer, and Gore has sold La Rondinaia and moved himself and his 8,000 books to California. We talk about Point to Point Navigation, a sequel of sorts to Palimpsest: A Memoir. It is, he insists, “a final memoir” and around its groaning table clusters the gilded cast of Vidal: The Movie: Jack and Jackie Kennedy, Tennessee Williams, Eleanor Roosevelt, Orson Welles, Greta Garbo, Frederico Fellini, Nureyev, Kazan, Capote (“He lived for gossip and he was also a marvellous liar. No facts ever gave him pause.”)…all ghosts, all gone.

It is, though, the memory of Howard which casts the longest shadow – he and Gore were together for more than half a century, a platonic relationship of profound friendship. Once at the Festival in the Pompadour restaurant in the Caley Hotel I dined with them, after which Howard got up and sang to a piano accompaniment. At least that is what I remember happening but I have often wondered, did he really sing or did I imagine it? Not for the first time have I regretted not keeping a diary.

In Point to Point Navigation, however, Gore relates what a wonderful singer Howard was, how his voice was better than Andy Williams’s, how he realised he couldn’t quite match Frank Sinatra and Tony Bennett. When he was ill in Ravello and couldn’t sleep he liked to listen to one of Barbra Streisand’s farewell concerts, which she had invited both of them to attend. Howard’s favourite song was ‘Our Love Is Here To Stay’ which echoed through the house as he lay dying.

WHEN in Toronto go if you dare to The Biggest Bookshop in the World, which would make any budding author think twice about embarking on a writing career. Though I would argue that it is no longer the world’s biggest bookshop – surely it’s the Strand in New York – it stockpiles books in such numbers as to make one wonder whether any more are necessary. I leave you therefore with a thought from Gabriel Zaid who, in So Many Books (Sort of Books, £8.99) writes: “Those who aspire to the status of cultured individuals visit bookshops with trepidation, overwhelmed by the immensity of all they have not read. They buy something that they’ve been told is good, make an unsuccessful attempt to read it, and when they have accumulated half a dozen unread books, feel so bad that they are afraid to buy more.” 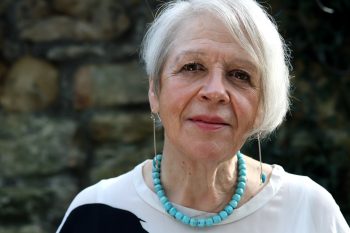