WHILE BROWSING the other day in the Letters Of Hugh MacDiarmid, I came across a letter to Maurice Lindsay written in1965, concerning an anthology of Scottish poetry which Lind-say was co-editing with George Bruce and Edwin Morgan. MacDiarmid writes: “I deplore Edwin Morgan’s association with you and George Bruce. Morgan’s prominence in connection with ‘Concrete Poetry’ and with Ian Hamilton Finlay rules him out completely as far as I am concerned. I will not agree to work of mine appearing in any anthology or periodical that uses rubbish of that sort, which I regard as an utter debasement of standards but also a very serious matter involving the very identity of poetry. These spatial arrangements of isolated letters and geometrically placed phrases, etc. has [sic] nothing whatsoever to do with poetry – any more than mud pies can be called a form of architecture”. And this was 1965, in the decade of liberation, experimentation and inclusiveness. Labels have been glibly fitted in retrospect: they don’t often square with the actualities. The irony (to use a gentle word) in this case is that Morgan had become well-known as an advocate of MacDiarmid’s later ‘poetry of fact’ and thereby, was at odds with some of MacDiarmid’s earlier supporters.

The decade was crucial to Edwin Morgan’s own development. In 1963 he met the man who was to be his companion and lover for fifteen years or so; and, partly in the new confidence and impetus given by this relationship, he brought out The Second Life in 1968. It was this collection, his first to be widely reviewed, which brought Morgan’s poetry to a wider audience, and the poetry is appropriately wider. There are spatial and sound poems, fantasy poems, love poems and gritty Glasgow poems, some of which were to become the staple diet of a generation of school pupils being dragooned towards Highers. There is a celebratory piece ‘To Hugh MacDiarmid’ but it is pointedly paralleled with a facing celebratory poem ‘To Ian Hamilton Finlay’.

For Morgan, nothing was ruled out and most things seemed to be ruled in. In the title poem of the collection, he asks: “Is it true that we come alive/ not once, but many times?” and “Does every man feel like this at forty?” and asserts “all things are possible”. We tend to forget that he was forty-seven when The Second Life appeared: for those of us who knew him in his youthful sixties and seventies, in his light, untweedy jackets and with his rattling up-to-date intelligence, it seemed that Eddie Morgan must always have been the same, somewhat like his portrayal in Sandy Moffat’s time-warping choir of singing bards in his painting of the Poets’ Pub (How often was Morgan in Milne’s Bar?). But for all his precociousness as a youth – he kept a diary of his astonishing reading before he joined the army when he was 20 – and allowing for the interruption of the war, he was a relatively late developer. Looking back now at the earlier writings gathered in the Collected Poems, the reader can discern many elements which anticipate his later work, but it was only in the Sixties that he emerged as a power in the land. One factor in his development was the emotionally explicit and anti-academic aspects of American Beat poets, precisely the poets so castigated by MacDiarmid, as in his ‘Question to Edwin Morgan’:

Is there even ane o’ thae Beatnik poets

Although Morgan had read Eliot and Pound with some pleasure and learned much from the Modernist collage style of The Waste Land, it was in Whitman, Hart Crane, Carlos Williams and the Black Mountain poets such as Olson that he found encouragement for his notion of the poet in relation to society and its evolution.

Throughout his long writing career, over fifty years, he has been intrigued with language in as many guises as he can consider. Intertwined with his own poetry have been extraordinary varieties of translation from many European languages, in a number of which he is fluent: Mayakovsky, Montale, Neruda, Brecht, Attila Jozsef, Petrarch, Beowulf ? the list goes on (but no Gaelic). There have been versions of Shakespeare in Scots, of the Baron Munchausen tall stories, simulated voices of animals, including the Loch Ness Monster, of creatures from other planets, as in ‘The First Men on Mercury’, of a resuscitated Egyptian mummy, and of several computers. Commentators on Morgan’s work have sometimes talked of his ventriloquism but often his speaking in tongues is less a projection of himself than a temporary adoption of an other identity or colouring. There was a time when it was difficult to grasp the ‘real Edwin Morgan’ or to see how the guises fitted together: too many surfaces, too much shape-changing, not enough steady focus. His poem ‘The Whittrick: a Poem in Eight Dialogues’, written between 1955 and 1961 but not published till 1971, consists of imagined dialogues between such pairs as MacDiarmid and Joyce, Marilyn Monroe and Galina Ulanova (the dancer), and a Buddhist sage and a Kabuki dramatist in 18th century Japan. The ‘whittrick’ (Scots for weasel) appears and disappears in the dialogues and represents shape-changing, facets of appearance, perhaps the only reality we can know. Something of the whittrick, its allusiveness and elusiveness, reappears through his later poetry, and is probably connected to his developing interest in plays and the theatre, a place of personae and illusion.

It is a quality he found and admired in Dunbar, Burns and MacDiarmid, as he said in an interview in 1988. He also identified energy and a mercurial spirit in these writers as aspects of the whittrick. It may be that in discovering poems in bits of newsprint and trying to offer unmediated reportage in what he called ‘Instamatic Poems’ he was freeing himself from traditional formal notions of the poem, as Carlos Williams and cummings had done in America and Apollinaire had done in France but, looking at some of them now, I don’t think they do much. There is a mechanical dullness in many. Yeats’ wise old dad warned his son against the practised poet’s “indulged facility”. Morgan’s fecundity has been amazing but sometimes a little less could mean a lot more.

Nonetheless, allowing for some lapses and wastage, the versatility has a sweep and vitality which are hugely stimulating. He has always shown a keenness for sequence poems and this has become more manifest as his career has progressed: ‘Glasgow Sonnets’, ‘The New Divan’, the book-length Sonnets from Scotland, ‘An Alphabet of Goddesses’, ‘From the Video Box’, ‘Beasts of Scotland’, several separate sequences in Cathures, Planet Wave; and his volumes Hold Hands Among the Atoms and Love and a Life are presented as sequences. The sequence gives licence to the whittrick side of his poetic nature, a kaleidoscopic or perspectival variety. Planet Wave was commissioned by the Cheltenham International Jazz Festival, set to music by the saxophonist Tommy Smith, and performed in 1997. It comprises twenty poems, each about a page in length, each marking a stage in the history of Earth. The opening poem describes the Big Bang when the universe came into being; the final poem, set in 2300, describes an expedition to establish a human colony on a newly discovered hospitable planet. The identity of the narrator remains vague: “Don’t ask me and don’t tell me. I was there./ It was a bang and it was big. I don’t know/ what was there before, I came out with it…What am I? You don’t know. It doesn’t matter.” We are enabled to see the end of the dinosaurs, the Flood, the sacrifice of humans to the Lord of the Universe Jaganath and his juggernaut in India in 1600, the destruction of the Twin Towers. The description of the juggernaut reminds me of a recurring connection between Morgan’s vision of the world and that of Shelley, the Shelley of Queen Mab, The Witch of Atlas, ‘The Cloud’, Prometheus Unbound and his final, unfinished and bleakly pessimistic The Triumph of Life, with their omniscient, visionary overview of our world. Morgan’s ‘completion’ of Shelley’s Triumph of Life in terza rima is the earliest dated poem (1949) in the Collected Poems and reveals his early poetic consanguinity with Shelley. A passionate desire that people, particularly poets, accept and relish the challenges of new knowledge, whether in chemistry or geology or technology or psychology, unites the two poets and both wish to see their poetry as a contributory factor in human advancement.

Planet Wave is included in the new collection, A Book of Lives, issuing from an invalid (but mightily valid) man in his mid-eighties, a collection packed with his characteristic inventiveness, forward-lookingness, largesse. The opening poem, ‘For the Opening of the Scottish Parliament, 9 October 2004’, begins: “Open the doors! light of the sun, shine in; light of the mind, shine out!”. Unfortunately, the sun may have shone, occasionally, but the light of the mind has not really beamed forth. As with Shelley, the idealism is admirable, the actuality is depressing. Some of the poems in this volume derive from his position, first as Poet Laureate of Glasgow and later as Scotland’s Makar. ‘The Welcome’, written for the International Federation of Librarians meeting in Glasgow, applauds the stored past in libraries but also welcomes the new opportunities of accessing and adding to knowledge. It concludes:

From Mungo’s cell to cyberspace, reality
Is a tango of intertextuality.

Have a fine dance with it this week, unlock Your word-hoards, take heart and take stock
Of everything a library can do
To let the future shimmer and show
through

What is predictable about a new collection from Morgan is its unpredictability. Who else has written or is likely to write a dialogue between a cancerous cell (Gorgo) and a normal cell (Beau)? It is reminiscent of medieval verbal jousting as in Everyman, or the Faust debate with Mephistopheles, and Gorgo sounds like Milton’s Satan, seductive, dangerous, exciting and unbourgeois: “Evil, be thou my good”. Behind this debate, Morgan is mocking his own weakened condition but making something out of it. In the penultimate poem in the long sequence Love and a Life, the poet declares: “We cry but we create, we kill but we build./ Dante was sure the stars were all – even ours – rolled out by love. They gild/ A dark that would truly scare/ If there was nothing there/ The horror of there not being something, good or bad or neither, made or found, willed or self-willed.” Most remarkably for a man of his age and condition the dominant note in this collection is certainly not retrospective or elegiac but forceful, alert to possibilities, open to suggestion.

Edwin Morgan has been and remains an inspirational quester. As a teacher, translator, essayist, artistic collaborator (most recently with Roddy Woomble and Idlewild) as well as a poet, his achievement has been colossal. Scotland and beyond should cherish him. I finish by taking two quotations from Morgan writing about a fellow poet and applying them to Morgan himself (Iain Crichton Smith made the same connection with the first quotation): “What gives Mayakovsky’s work its peculiar character, and I think also its peculiar value, is its unusual combination of wild avant-garde leanings and flashes and something of central human concern. A grotesque and vivid comic fantasy is never lost; neither is the sense of pain, of loneliness, of longing, sometimes misguided by creative exhilaration; neither is the sense of history and the role and the duty of the poet.” And in his poem ‘To Hugh MacDiarmid’:

Somewhere in astonishment you would set man,

short-range or long-range confrontation or kinship

with all the world he changes and it changes him,

the greater changes he grows into making now,

the greatest like faint stars in the drift of smoke of thought. 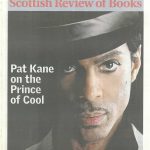 The King My Father