Warning: session_start() expects parameter 1 to be array, string given in /home/yourband/public_html/srb.swddev.com/wp-includes/class-wp-hook.php on line 286
 Volume 5 – Issue 2 – Gallimaufry – Scottish Review of Books

This is the second detective novel in a series featuring real-life 1930s crime writer, the Inverness-born Josephine Tey. Upson is revisiting what is usually called the ‘Golden Age of Crime’ by setting her novels between the wars, but she is also attempting to make a link between murder committed by individuals and mass slaughter on the battlefields of Europe: Upson’s detective, Archie Penrose, fought in the First World War and is battle- scarred; Tey’s fiancé, who was also Penrose’s best friend, was killed there. A deeper psychological connection between the amateur and the professional then is being explored here, as well as different notions of killing, and these contrasts work just as well in this novel as they did in her first. In Angel With Two Faces, both Tey and Penrose are drawn back to Penrose’s home village in Cornwall after the death of a young local man. One of the problems with crime novels is their lack of attention to those who suffer after the death of someone in their midst, and Upson takes care to address that, without slowing down the narrative. Her heroine, too, is a sympathetic one, here still reeling from the murder of a fan in the first novel in the series.

Given that so many of the memories of life in ‘disappearing Britain’ belong to members of an often beleaguered and exploited working- class, perhaps it’s just as well to wave goodbye to that particular country. But Dudgeon pits the victims against families who benefited from Attlee’s post-war housing policies, like those of Maria Fyffe’s, an interviewee who missed the camaraderie of the old tenement living quarters, thirteen- to-a-room notwithstanding. Working-class memories are often tarred with the ‘easy sentiment’ brush, that almost comic representation of happy times spent in the most appalling circumstances, but Dudgeon pays respect to the good as well as to the bad aspects of Glasgow life in the early part of the twentieth century, capturing the pride of those who survived hard times and exploitation. Dudgeon chronicles the preposterous lack of safety laws for men working on shipyards, the brutal but stressrelieving humour of the shop floor, and the dominance of women in the tenements. There’s a dark side to crowded family lives, of course – incest, sexual abuse, and possibly worse – but that’s a different story and not, alas, one that has disappeared.

The bleak opening chapter of this debut novel, tracing Dublin-born Denny’s return to his native city, belies the humour and liveliness of the rest of the book. Denny has come back ‘home’ because his mother has died, and her death leaves behind only him, his sister, and the one sibling who has done well enough to buy the family home. Sister Paula wants to conduct a séance, however, as she is convinced their home is haunted; Denny duly enlists the help of his friends Maggit and Pajo. Byrne is depicting a similar kind of urban underclass to the one Roddy Doyle has written about, with the same humour and attention to detail; people whose daily lives are circumscribed by poverty, drugs, alcohol, lack of opportunities, and unemployment. Also in common with Doyle, Byrne does it without being patronising or pitying. The shambolic nature of Denny’s existence is claustrophobic, and it’s hard to imagine how he’ll escape, yet escape is the only option. It’s Denny’s journey out of a Dublin the tourists don’t see and the politicians don’t care about that is part of the appeal of Byrne’s story.

This is a superb history of the battle of Bannockburn, told with real excitement and verve by Cornell. Following what you might call the Starkey approach to history, which concentrates on characters rather than historical forces, and which currently dominates popular TV history, Cornell gives us as much a psychological portrait of Robert the Bruce as an elaboration of the military tactics he employed in battle. But when it’s done as well as this, it’s easy to see why it’s such a winning method. Cornell’s Bruce is a novelist’s dream as well as a historian’s: a torn man, a contradiction, as all the best characters are. He is a person who changes sides as easily as blinking, who betrays and murders for the sake of personal power, not for patriotism. Cornell’s evocation of the courts of the late thirteenth and early fourteenth centuries is masterly, too, showing centres of power as full of intrigue and violence as anything the bloody Tudor dynasty could produce. The academic imprint should not put off general readers: this is one for students of history, certainly, but it’s also an intelligent and accessible account that shouldn’t be missed by anyone else.

John Niven’s second book The Amateurs is a comedic piece of lad-lit filled with golf and gangsters. Set in the fictional Scottish coastal town of Ardgirvan, office manager Gary’s life changes after he is concussed on the golf course. A stray ball gives him a dimpled imprint on his temple as well as an incredible golf swing which wasn’t there before. Despite having been the worst golfer in the Ravenscroft clubhouse, Gary eventually qualifies for the Open where he plays against the world number one, Calvin Linklater.

Niven contrasts Gary’s optimistic journey with the malicious antics of the other characters. Gary’s evil wife Pauline, in love with carpet millionaire Findlay Masterson, hatches a violent scheme to get rid of her husband. And Gary’s older brother Lee, a dealer who forgets where he hides his drugs, becomes the minion of crime lord Ranta Campbell.

The three plotlines eventually converge into an amusing blowout. Sexual humour, potty humour and the occasional poke at West of Scotland mannerisms keeps the book’s tone light and the laughs plentiful. Though the male characters may be arrogant and the females slow-witted, the author of Kill Your Friends proves that one’s second novel can be just as humorous as the first.

Polly Clark’s third book of poetry meditates on loss and renewal. Farewell My Lovely focuses on how the body heals. Clark alternates between first and third person point of view, but maintains a starkly honest timbre throughout.

The opening poems can be characterised by their domestic settings and everyday occurrences, but as the book progresses, Clark tackles more imaginative topics. The poem ‘Return to Eden’ illustrates deep regret and emptiness: “When we were allowed back/we saw the place had changed. /Sea licked its borders, /fish flashed like knives. Nothing pleased us. Nothing lived up/to what we had suffered to return”.

Clark prefers to write in clean, unfussy couplets that directly convey the poem’s theme. The highlight of the collection is the sequence ‘I thought I was in Scotland’, voiced by a veteran of the Falklands war. Seven poems express the excitement, duty and dread of fighting. Clark’s minimalist style suits her character’s perpetually stunned state of mind. Each poem seems to build on the previous in tension, leading to the letter-poem ‘Dear Mum’, where crossed-out lines reveal the characters’ underlying dark thoughts. A twist on the song ‘Fame’ closes this sequence and the collection, where the musical’s uplifting lyrics ironically surround gloomy verse about the soldier’s life after the war.

The Winding Stick is a glum yet compassionate novel about London’s Tamil community. Terry is a lonely garage attendant who experiences visions about the people he sees on his CCTV screen. Some of the people whom he dreams about include an unpopular and pimply teenager, a solitary divorced man, and an oppressed housewife. Shy and insecure, with rheumy eyes, Terry eventually befriends Kandy, a sex worker and psychology student, and Siva, his garage manager.

Together they help the victims in Terry’s visions and discover an inner peace none of them had ever known. Valmorbida’s enigmatic plot is matched by an equally obscure structure and slick, musical language. Stories are told within stories, as Terry’s visions are abruptly thrust into the chapters. These visions can be gruesome and pitiable, and illustrative of the ways in which vulnerable people are badly treated. The chapters themselves are named after the seven deadly sins and the seven heavenly virtues, which reflect upon the content of Terry’s dreams. Narrated in a stream of consciousness style, the book’s swinging tempo and shifting points of view make for a challenging though worthwhile read.

Broadcaster, writer and musician Tom Morton has created Shetland’s answer to James Bond in his new novel, Serpentine. Former SAS agent Mark Murricane leads the search for the elusive Serpentine, a roving terrorist involved in the ‘Troubles’ of Northern Ireland and now causing chaos on an international scale. Like Bond, Murricane has a facility for escaping from tight spots armed with a gun, some explosives and quip or two. Our hero changes locations at breakneck speed. We first meet him in Gaza, where he frees a British hostage, and then follow him to the Scottish Highlands and Ireland, as he confronts ex-lovers, former RUC officers and other tough types. Written in remarkably smooth diction, this novel walks the line between crime and literary fiction. Fast paced, lucidly narrated and featuring articulate characters, Serpentine is an addictive read. Murricane is an odd but likable protagonist, a man of great foresight which makes up for his slight, wiry build. The novel is laced with dark humour and bound together by the real-life mystery of the Dublin and Monaghan bombings of March 1974 for which no one has ever been charged.

Appearing as part of the Edinburgh Critical Guides to Literature series, Carruthers offers an enlightening discussion on past and current modes of deconstructing Scottish literature. Concerned that Scottish literature has been primarily viewed under a nationalistic or political lens, Carruthers explores the possibilities and consequences of assessing Scottish Literature under the lesser examined headings of feminism, gender and sexuality. Five chapters also explore the ‘Scots revival’ in the eighteenth and nineteenth century, the Celticism vs Gaelism debate, and Scotland’s literary relations with England, Ireland and the United States.

Carruthers begins with Scottish writing in the medieval period and ends with today’s popular texts. One of the more interesting chapters, ‘Intimate Spaces of Critical Literature, scrutinises modern texts, with Carruthers offering an interesting discussion of Irvine Welsh’s Trainspotting. He notes that though the book is sometimes thought to have a nationalistic theme, the content proves otherwise. 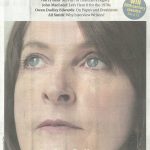