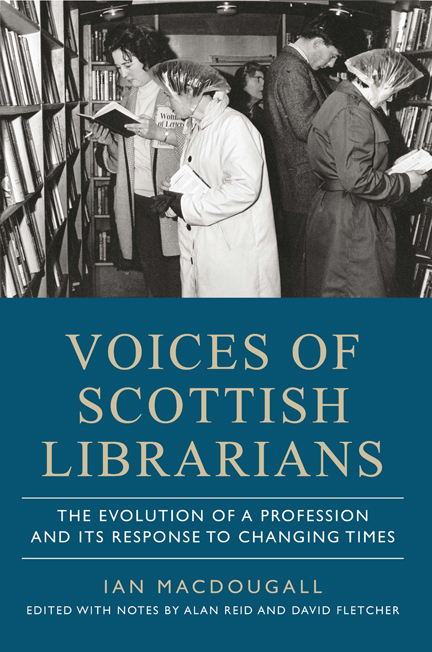 Voices of Scottish Librarians : The Evolution of a Profession and its Response to Changing Times

A man walks into the Mitchell Library:

Reader: Have you got a book on Glasgow, mister?
Librarian: Aye, 4000!
Reader: Well, it’s the north of the city.
Librarian: Oh, aye, here, there’s this, there’s that.
Reader: It’s round about Maryhill.
Librarian: Well, there’s a wee history of it.
Reader: No, I want tae know if ma sister in-law’s still in Shamrock Street.
Librarian: If you’d said that first, I would have looked it up in the valuation roll or the voters’ roll.

Joe Fisher, former Librarian of the Mitchell’s Glasgow Room, recalls that man fondly. He is an amalgam of readers whose requests had to be interpreted by means of interrogation, deduction or second sight. In this, the librarian’s role is not unlike a doctor’s, probing the patient for their symptoms, searching between the words for what they are really saying, and occasionally making wild or inspired guesses. All in hope of getting to the point before closing time.

Fisher is but one of the fourteen engaging interviewees in Ian MacDougall’s unexpectedly fascinating collection of oral memoirs in Voices of Scottish Librarians, but he stands out, with one or two others, for his love of telling stories. His evident enjoyment of the job, however, is a feature of all the subjects of this latest work from the Scottish Working People’s History Trust, which is building an invaluable repository of recollections of those in lines of work at risk of being forgotten. Thanks to Fisher we know of the official at the Mitchell with poorly fitting dentures, who would sometimes lose them down the hoist shaft in which books were shuttled from one floor to another. ‘Every now and again you’d be told, “Go down to the basement and take Bernard’s teeth back up to him.” It was Fisher and his colleagues who, when the Stone of Destiny was stolen, thought to check who had recently been browsing guides to Westminster Abbey, thereby identifying the culprits. ‘I don’t know whether to be proud of that or not,’ he reflects.

The librarians who feature in these pages were born between 1911 – Dorothy Milne, County Librarian in West Lothian – and 1946 – John Hunter, Chief Librarian in Shetland. In between are men and women – mainly men, despite this being a predominantly female profession – from all parts of the country and all kinds of backgrounds, though only one from truly rural, agricultural origins. What they all share is not, oddly enough, their love of reading or a passion to become keepers of books, but a strong and even campaigning awareness of the importance of books to society. Most come from modest homes, some indeed from poor families, such as M W (Bill) Paton from Alloa, whose father was a miner. As an ageing man, Paton talks lovingly of the good home he came from, and ‘what moving to a council house did for the spirits in the house’. Another whose beginnings were also far from affluent is John Preston, whose parents worked themselves into an early grave in their fruit shop in Glasgow. He recalls, ‘they gave me a wonderful upbringing. Anything I got, I treasured.’  Gavin Drummond, MBE, from Perth, who went on to become County Librarian in Angus, recounts that his grandfather, a policeman, died from his injuries at the hands of a Glasgow gang.

Some of these librarians served in the armed forces during World War Two. Andrew Fraser, later Chief Librarian of Midlothian, was a prisoner of war, working in the mines in Silesia for three and a half years before making a run for it, though he and a fellow escapee were eventually caught. Tom Gray, later Chief Librarian for Ross and Cromarty, had been in the RAF. When the war ended, he says ‘I went back to the library as if nothing had happened.’ Nor had anything changed in the library while he’d been gone.

Only a handful of this array of high-performers were obviously of the middle classes.  There is perhaps a lesson there, if the authorities were willing to see it. Those for whom libraries are particularly valuable, and indeed essential, recognize their worth, and want not just to protect but to nurture them. It is a message to which councils and government, north and south, are growing stone deaf. In his spirited account of rising to become the youngest and possibly most confident Chief Librarian in Britain, John Hunter is blunt: ‘Councillors are totally unaware of the quantity and quality of information that libraries provide. They still think it’s issuing two or three Mills & Boon romances. I don’t know how one can change that, short of dragging every councillor into the library to see what happens.’

Although only now seeing the light of print, the first of these interviews was conducted in 1996, the last in 2002. As a consequence, the time lag between observations on library services at the point at which the interviewees retired, and the current situation, is pronounced. Most valuable about these voices, however, is not their predictions about the future of libraries, but the way they illuminate the period when they were in the profession, and the personalities who made libraries what they were.

Under MacDougall’s probing, they reveal the social and political conditions in which they were born and raised. The oldest have never forgotten whether their earliest homes had electricity or hot and cold running water, or an indoor or outdoor toilet. John Preston, whose family lived in a Glasgow close, says, ‘I can remember quite clearly the old lady lamplighter comin’ in, lightin’ up.’
The incidental detail they offer about their parents and grandparents means this book reaches back into the nineteenth century, an era in which some of the libraries where they found themselves eventually working were still mired. Margaret Deas, who left school and started as a typist in the National Library of Scotland in 1951, describes her first impressions: ‘The first day was awful: this great big place: silent, and a grandfather clock went tick-tock – Sir Walter Scott’s, incidentally. There was three steps down into this great big room, and I went in and it was so quiet… That was when the Library had the books in the Laigh Hall – all these bookcases with wire on them, a great big coal fire and old Giles, the messenger. Then these men appeared with black gowns and a white wig who had their offices in the Library along that corridor. You couldn’t distinguish the National Library from the Advocates use of it. It was very nineteenth century.’

Deas worked in the NLS until she retired, 42 years later. During her time there, she was not impressed by Gordon Brown, the first student Rector of the University of Edinburgh, who was offended at the library’s strict rules about who could and could not use it. ‘He didn’t come in very much but he was saying that they [undergraduates] should be allowed in’. She reiterates here, as throughout her career, that as a conservation library, the NLS was ‘thinking of future generations, not just the present’.

Another who was hooked from the start, was John Preston, who rose to become Regional Librarian of Dumfries & Galloway but, like several others, fell into the job. Leaving school to start earning a living, he was asked by the careers advisor if he had thought of becoming a librarian. ‘It had never even crossed my simple wee mind. So I started in the Mitchell the next week and that’s been me in the library world until I’d to pack it in.’

From the most august and forbidding library in the country – possibly on these islands – to branches in Methil, Tranent or Riddrie, these champions of the printed word brought intelligence, foresight and commitment to offering the best range of titles, and most accessible modern service possible to the people they served.

‘Many librarians felt they were pioneers,’ remarks Andrew Fraser. To Scotland’s fame for inventing penicillin, tarmac and television should be added another notable first: the mobile library. Thanks to this winning idea, readers in rural districts not only could read anything they asked for without stirring beyond the village green, but could also have parcels and eggs and Christmas gifts ferried from one village to the next by obliging librarian-couriers who recognized  – and relished –  their wider role in the community.

The serious educational, literary and academic function of libraries is never underplayed, but nor is their role as a haven. Future Chief Assistant Librarian in charge of Edinburgh Central Library, Alan White started out in Edinburgh’s Stockbridge branch, whose newspapers and board games allowed the homeless and drop-outs a respite. On quiet evenings, he would join them. ‘For years afterwards I would be walking along Princes Street trying to look respectable and out of a doorway would lurch a terrible, old, smelly drunken tramp saying, “Hello Alan. Nice to see you!” These were all denizens of the newsroom where I played dominoes.’

Alongside the wealth of information these librarians offer in easy conversational style, is the picture of a profession that in their time rose to its zenith. The earliest librarians had no formal qualifications – ‘They were good librarians, by Jove,’ says Andrew Fraser. Most, not all, of these interviewees took the new librarianship course, first available in Glasgow, under the direction of the famous librarian-teacher W B Paton. This was soon followed by a degree course at Strathclyde University and the  opening in the late 1960s of a Library School at Robert Gordon’s College in Aberdeen. Whereupon librarianship became a bona fide profession, requiring diplomas and degrees. In line with this formalizing, the arc of the library world’s fortunes rose to a peak between the 1960s and 1990s. In this too-short halcyon age, when libraries were adequately or even generously funded, librarians, whether in small branches or world-class reference departments, were recognized as priceless assets and adjuncts to a nation’s educational, social and intellectual aspirations. (Not that their salaries reflected the esteem in which they were held.)

That time is long gone, as any librarian will tell you, sotto voce. In the years since the first interview was conducted and now, libraries have lost their glister, as philistine bureaucrats take control of budgets and are too ignorant to appreciate what a library is, and can be, and does. John Hunter believes librarians are in part responsible for this: ‘we, too, as a profession have not blown our own trumpet loud enough’. As this collection of interviews shows, however, librarians are more given to being thoughtful and droll than boastful.