Warning: session_start() expects parameter 1 to be array, string given in /home/customer/www/scottishreviewofbooks.org/public_html/wp-includes/class-wp-hook.php on line 303
 Volume 11 Issue 4 Editorial – Scottish Review of Books 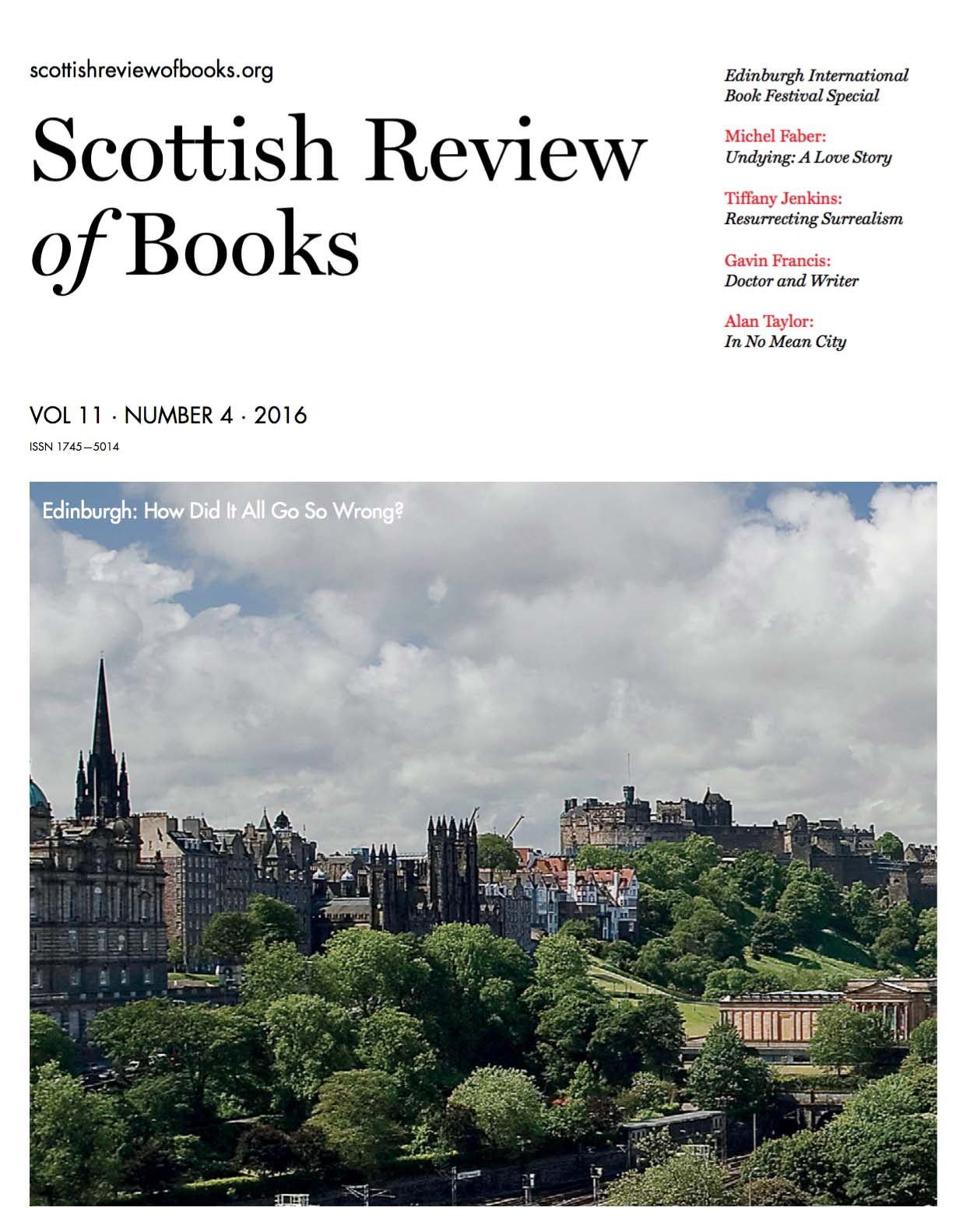 Seven decades ago plans for the first Edinburgh International Festival, which finally took place in 1947, were well underway. Its promoters were visionaries who through art and culture aspired to unite nations and peoples who for six long and calamitous years were hellbent on wiping each other out.

Edinburgh, it was hoped, would offer a breezy respite to those who wished to put aside past enmities and build a future that would be inclusive, cooperative and compassionate. The compact Scottish capital, with its romantic backdrop and philosophical bedrock, seemed ideally suited to host such an event. The key word was ‘international’; then as now Scots considered themselves Europeans, as was reflected in the recent referendum on Britain’s future in the European Union.

The years that followed have tested Edinburgh’s resolve and it has not been found wanting. It’s true that there were periods when it seemed that its burghers’ attitude to the Festival and its by-products was ambivalent at best and hostile at worst. Wrinkled readers may recall an article published in 1983 in the Glasgow Herald by the distinguished former editor of the Scotsman, Alistair Dunnett titled ‘Can Edinburgh be saved from shrivelled minds?’ Articulating what many people had begun to think, Dunnett laid into philistine powers-that-be. Considering the city’s cultural history from the mid-1950s to the early 1980s, he could not ‘recall a single stroke worthy of civic imagination’. Edinburgh, he concluded, was in decline with no sign of incline.  It had become – pace Rudyard Kipling –‘A withered beldame now/Brooding on ancient fame.’

Yet even as he railed against the parsimony of the city fathers and bemoaned the ignorance of his fellow citizens, Dunnett remained incorrigibly optimistic. Nor was he disappointed. The years that followed showed that Edinburgh’s affection for the Festival was deep-rooted and sincere. What it lacked in financial heft it made up for in effort and invention. Moreover it gave the inhabitants of this relatively small, northern city a role in a world that as we entered the twenty-first century was becoming fractured and troubled. It was a place to which people could come, express and enjoy themselves and encounter like-minded souls. It was a three-week diversion from grim news and and quotidian routine.

And so it goes. Since Dunnett wrote his splendid diatribe Edinburgh has acquired a parliament and – no less of an achievement – a tramway. Tourists throng to it in their many thousands, using Google maps to find their way among the closes and steps of the Old Town, enchanted by the cobblestones and the sooty spires of presbyterianism. It is the kind of place in which many of them dream of living. It is manageable, walkable, characterful, steeped in history. But increasingly it is a city that, like Venice, is difficult for natives to feel at ease in.

One of the reasons for this is the replacement or modification of much-loved buildings with bland or ugly modern ones. Another, as David Black writes in this issue of the SRB, is an inundation of students whose investment in the city is short-term. Everywhere one looks, it seems, custom-built accommodation is being built for this population of itinerants. We do not, of course, seek to denigrate students. On the contrary, they contribute much to the vitality of Edinburgh. What alarms us, however, and countless others, is that in order to put a roof over their heads a wrecking ball is being taken to a Unesco World Heritage site with what appears to be little or no notice paid to why it was given such an accolade, which is supposed to protect its tradition and integrity.

Everywhere we look buildings that are evocative of and integral to Edinburgh are being demolished or modified. A prime example of this is the Old Royal High School on the south side of Calton Hill. Once mooted as the home of the reconvened Scottish parliament, it is proposed to transform it into a ‘luxury’ hotel complete with what have been called ‘Mickey Mouse ears’ and an Inca terrace. It is the architectural equivalent of daubing a moustache on the Mona Lisa or turning Munch’s Scream into a rictus smile. That such a proposal is being seriously considered by councillors and officials suggests that Dunnett’s fears were well-founded.

Ironically, cities and their future is one of the themes of this year’s Edinburgh Book Festival. It is an issue of global concern as populations grow exponentially and living in cities becomes ever less congenial to those who want to make them their home. There is no better time to take stock and ask what kind of place we want to live in. With that in mind we commend the wise words of Jane Jacobs who in The Death and Life of Great American Cities wrote: ‘Cities are in a sense natural ecosystems too…They are not disposable. Whenever and wherever societies have flourished and prospered rather than stagnated and decayed, creative and workable cities have been at the core of the phenomenon; they have pulled their weight and more.’

Coinciding with this issue of the Scottish Review of Books is the launch of the Emerging Critics, a project run by the SRB in collaboration with Creative Scotland. Designed to discover a new generation of critics in the digital age, you can find details on our wonderful, new website: scottishreviewofbooks.org. Do pay it a visit.