Victoria Crowe,’ writes Guy Pep-loe from the Scottish Gallery in a foreword to this monograph, ‘has quietly emerged into a preeminent position in Scottish painting’. The key word in this sentence is ‘quietly’. In an age where art all too often courts drama and controversy, Crowe has achieved her place without much of either. Instead, she has simply applied herself with rigour and commitment to the issues which have driven her artistic practice for more than 45 years.

In this, the ﬁrst complete book on her career, Duncan Macmillan traces the strands of her artistic development. What stands out most is their consistency. There are few tangents, cul-de-sacs or u-turns. She does not halt one line of exploration and suddenly begin another. Yet, over time, there is a kind of transformation. It is as if the questions she asked as a young painter at the Royal College in the 1960s are being answered in her mature work: how to create paintings which can deal with time and memory; how to bend pictorial space so that it becomes a vehicle for dreams, thoughts, imagination as well as representations of the visible world.

A Victoria Crowe painting typically starts with observation, very often of the natural world. It might contain elements of landscape, portraiture, still life and ﬂower painting. But in her richly associative artistic language, the separate strands weave together to become more than the sum of their parts. Often, her paintings combine interior and exterior – consider titles such as ‘Within and Without’, ‘Garden Room – A View from the Interior’. She is interested in collapsing these boundaries, in looking inwards as well as outwards. It is no coincidence that she has painted portraits of leading psychoanalysts Winifred Rushforth and R. D. Laing. She is drawn to the landscapes of the inner world.

Victoria Crowe was born on V.E. Day in 1945, and was christened, in honour of the date, Victoria Elizabeth. She grew up in West London, went to Kingston School of Art at 16, then to the Royal College. She was raised Catholic, though, at the age of 21, she made a decision to turn away from formal religion. Her concern with the mysterious and the transcendental, however, has never left her.

Her work is steeped in it, illuminated by it.

An early manifestation of this was an interest in Russian icons, which she ﬁrst saw on a college trip behind the Iron Curtain in 1964. An important early picture, ‘Self Portrait with icon’, shows her at 20, staring levelly out at us, Rublev’s majestic head of Christ at her left shoulder. Icons were the subject of her dissertation at the RCA, in which she wrote, revealingly: ‘Whereas Western artists have been obsessed by the visual aspects of the external world, the Russian painters were concerned exclusively with the inner vision which the contemplation of divine beings and sacred histories aroused in them.’ If Western religious art was determined, with its vivid depictions of saints and angels, to make the mysterious visible, Russian icons did the opposite. They tell us that such a thing is impossible, their simplicity keeps the sense of mystery intact.

Robin Philipson, recently appointed head of school at Edinburgh College of Art, saw Crowe’s degree show at the RCA in 1968 and immediately offered her a teaching post in Edinburgh. Her husband, Michael Wal-ton, whom she met as a student at Kingston, trained as a school teacher, but he too joined the staff of ECA a few years later. They settled in the hamlet of Kittleyknowe, a mile east of Carlops on the edge of the Pentland Hills. She had never been to Scotland before, but she explored her new landscape by drawing it. Always attracted to winter landscapes, she was soon painting dramatic vistas of the snow-covered moors.

Crowe became close friends with her next door neighbour at Kittleyknowe, shepherd Jenny Armstrong, who became the subject of Crowe’s much loved series of paintings ‘A Shepherd’s Life’, exhibited at the Scottish National Portrait Gallery in 2000. Until then, Crowe’s Pentland landscapes had been largely unpopulated, and Jenny did not particularly want to be painted, but soon she began to creep into them, a tiny ﬁgure walking with her dogs or feeding her sheep against a wide white blanket of snow. As the years passed, and old age and inﬁrmity conﬁned Jenny to her cottage, Crowe’s attention turned indoors. The ﬁnal paintings are a series of interiors painting after Jenny’s death in 1985.

Crowe’s friendship with Armstrong came at a crucial time. Raising two young children, and wondering how she could continue with her art, she was bolstered by shepherd’s sense of her self, the way she had made a life for herself in harmony with the landscape and seasons. It was also deeply important for her as an artist. In the ‘Shepherd’s Life’ pictures, she was bringing together objects and landscape, interior and exterior. In Greece, she had seen votives, objects hung before an icon and invested with hopes, fears, prayers, stories. In her last paintings of Armstrong’s cottage, she began to invest objects and trinkets with a similar signiﬁcance; the ordinary became imbued with the sacred.

Kittleyknowe was changing: the older residents were fading, the property developers moving in. When the Crowes and their two teenage children moved to West Linton in 1990, Victoria needed a new landscape to fuel her artistic ﬁres. An RSA scholarship enabled her to travel to Italy where she soaked up a richer palette of colours, and became absorbed in looking at the painting of the fourteenth and ﬁfteenth centuries. Perhaps, like Russian icons, these had a directness and simplicity which deepened their symbolic power. In her own paintings of this period, developments hinted at in ‘A Shepherd’s Life’ become more explicit. Her compositions become more layered, the structure softens, images and ideas associate more freely, physical space yields to metaphysical space.

In December 1994, the Crowes were rocked by the news that their son Ben, by then in his third year at university, had cancer. He died a year later. His parents coped each in their own way. Michael founded a charity, the Ben Walton Trust, to raise awareness and funding to tackle oral cancers in young people. Victoria painted. It would be trite to say that her painting deepened as a result of this tragedy, but the pictures from that time are remarkable, darker in hue than much of her earlier work, starred with ﬂowers, dragonﬂies, portraits of both children; beautiful, sad, important works about the brevity and splendour of things.

These themes would continue to deepen in the years that followed. Her connection with Italy would deepen too. In 1998, she visited Venice for the ﬁrst time. Avoiding the much-painted vistas of the city, she was drawn instead to the tarnished mirrors in its crumbling palazzos, the grafﬁti layered on its ancient walls. Always interested in notions of time, the ancient city which wears its past so easily on its sleeve enthralled her. She acquired a studio there and still paints there several months of the year.

A long interest in botanical drawing – she took over the class at ECA vacated when Elizabeth Blackadder retired – led to a body of work titled ‘Plant Memory’ for the RSA in 2007. These works illustrate how much she has moved towards mixed-media, incorporating screen print, etching and transfer printing alongside drawing, watercolour, impressions from actual plants, and snippets from early botanical books. Writing on that show, leading botanist David Ingram suggests that her studies in the Cambridge Herbarium were not unconnected to her love of Venice: both places fed her central themes of timelessness and fragility.

Duncan Macmillan is keen to make a case for Victoria Crowe as a ‘modern’ artist, as if her credentials in this area somehow needed bolstering. He argues that her desire to paint the inner life, ‘the ever-moving point of individual consciousness’, is one of the great engines of modern art. Certainly, the modern – if we take out, for a moment, the followers of Duchamp, intent on the individual expression above all else – is a search for meaning, for a greater understanding of what it is to be alive. In this sense, Crowe is modern indeed.

But she is also quite un-modern. She is part of a generation of artists whose training was traditional, founded on skill and genre, both of which are less than prominent in artistic education today. Like all the best artists, she bent these to her own purposes, but they were the foundations on which she built her career. And then there is beauty. Crowe’s paintings are beautiful, that much is unarguable, and that is out of step with much of what passes for ‘modern art’. As Michael Walton writes in his introduction: ‘Being in a world where the immediate and the new demand attention, beauty is perhaps questioned as an outmoded form.’

Beauty is important to Crowe, not as an end in itself, but as a philosophical concept, connected to another very un-modern idea, the concept of truth. Speaking about painting the objects on Jenny Armstrong’s mantelpiece, she has said: ‘It was important to record the truth’. That is the engine which drives the work’s integrity. Many contemporary artists would run for cover at the notion that they might be expected to address either ‘beauty’ or ‘truth’. Artists such as Victoria Crowe don’t undertake these lightly, yet they know, like the grain of sand in the oyster shell, they must worry at them, returning to them again and again.

This monograph must not be regarded as drawing a line under a career, however well spent. Crowe’s work continues. She is engaged in a major commission of a suite of paintings for an Italianate house in the Borders. Meanwhile, the Dovecot Studios is currently weaving one of the most iconic of the ‘Shepherd’s Life’ scenes from a palette of natural sheep’s wool. She continues to experiment with collapsing time and space: a Pentland landscape is glimpsed in a faded mirror in her Venetian studio; a self portrait by Raphael appears next to a very real twenty-ﬁrst   century artichoke. The boundary lines grow comfortably ﬂuid, between past and present, internal and external, known and imagined, the numinous and the everyday. 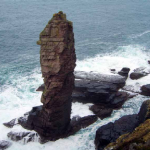