With a brace of partridges

And a very handsome turkey.”

There was chat: how gendarmes, “Damned gendarmes” nicked

the Scot for sketching Calais gates;

how old Hogarth was beaten up, deported for the same; linked arms upon a sunlit lawn, strolling

the mere sound of a smile, “Monsieur”, stopped Géricault from working; most shadow

in with white. Gleams from a teapot

strike them on the tartan rug: a housemaid tries to still

swinging to the motion of her walk across the greensward,

a doll in the distance, the sloping garden magnifies her step by step

until she spreads a tablecloth of sacramental white,

his ‘shadow-box’, a tiny Knox

carved out of clay, spirited wings of his little cloak

flung out indignantly at the idol

the artist will make of him.

of a barn, automata

of a pint-sized coach and horses

that trundled through the Dauphin’s childhood;

briefly on the head of Knox,

beneath a ruby shimmer.

to see it sip and read the pulpit’s book:

“Draw this my friend? It’s worth more than all our canvases.” Wilkie gestures and falls

is dazzled by the sun, struggles to follow the fritter

of the butterfly among the stars of History.

It dances out a crazy line

around the picnic party

and the artists – abashed – allow the summer’s day

to take their measure, make them models

in this laboratory of space:

the maid, starched and glittering with sugar spoons, the men’s heads, clear and dark as jewels,

the white cloth spread in quiet communion, bodies on a rug at just this to each other.

Moonlight becomes blades, blades moonlight as they lilt and pivot out of shadow into yellow pools: I make a point and stop:

steam breath into air that cracks like ice, close eyes upon a world that gleams and scrapes and rasps; ‘Look out!’

my arm and birls me about; I make a run: circling to the centre of the loch –

cross stroke, chassé, cross over slip – turn and look back across the white and shining field: the huddle of ‘ingénues’

practising their 8’s, the cries of ‘off!’ and ‘change!’, the silver scales

of safety ropes slithering from baskets;

silence set off by distant swish.

And so I see the scene again: late afternoon; the little minister, still svelte but on the verge of portliness, breasting the ice with a frank and open stroke;

his friends, the painters, smiling, betting: which one could lay down just that shade of lilac shadow cast by the suburban Mercury, silhouetted ‘contre jour’?

Then, the sudden hush as water tensed

at his instruction, trout gazed up at his incisive feet. I felt that God must be in clarity like this

and listened to the valley echo

the striations of his silver blades.

Far out on Duddingston Loch

our true apostle sped with twice the speed of Christ who walked the waves.

of wintered elements. At once I heard

a tapping from the hills

as if a tiny hammer big with work sought to split this world: the shelf of ice with all its merry skaters cracked from side to side then tipped

like a sinking ship; loch made meadow loch as little cows, aristocratic blades, the Reverend and his painters clung to trees

above a sundered castle, floated off

to villages, new towns, enlightened schemes and sunken moonlit pastures. With a sense of real presence

he crossed my vision: and I wondered if it mattered which man would win the bet: Raeburn or Danloux?

Both helped him to untie

arm in arm towards the village.

My little nephew holds my hand; together we stare up at the big picture, its rows

of Free Kirk ministers raked up towards two skylights in a barn-like roof. Pointing to a young man in a neckerchief looking down on the assembly, he asks “What’s that one called?” I check my map of all the holy folk: “He’s Willie Liston,

a local fisherman”, come to witness

the disruption of his church.

My nephew stretches up his hand, palm

open, then snaps it shut, as if he wants to open

up the tiny distant heads like windows in an advent calendar. He’s right. This box needs light:

washes, waves of it that Willie could drop

in nets upon the douce and sober company

who all await that Fisher of the guid elect.

His body blocks the aperture but if my nephew prized these faces back upon their canvas hinges he’d find them all in miniature, upended

on photographic slides the artist cribbed

their portraits from. Here, behind these windows on the painting’s past, the sun imprints

only the camera is true to: Willie Liston

of crumpled clothes, his breeks and half

his face blanched to dough-like white.

stay for the exposure: five minutes

on the lens but twenty three good years

before that picture of him boxed in against

the clouds is done. And so he leaves mid-pose, bored by inertia, his features blurred

like the see-through cat that quit the shot because the basket did not smell of fish.

The skylight fills up with a choppy sea,

a ghost boat steers from frame to frame

and there is Liston perching in the sunlit window

of a painting that inspired the one he’s travelled from. Beneath him now: a covered tennis court, French voices bouncing off brick walls as revolutionaries

knock oaths of liberty, fraternity back and forth

across the mock-up of a lithe, impromptu parliament.

A gust of wind unfurls a curtain like a sail. It billows through the dusty air carved by the slash of republican salutes and Willie spies the features of a Patriot,

a Protestant, a President standing on a tailor’s table. The democratic crowd behind is sunk in too much light.

My little nephew looks up at Willie Liston sailing

on the pitched roof above the minute detail of his church. The boy, the fisherman seem almost spirited

away, caught in the half-light from two windows;

the bosun and his mate: out for a catch beyond

kirk and parliament, sounding out the skylit deep between two sketches of the world. My nephew absent-mindedly strokes my hand then

turns and smiles at me: a grin without a cat. 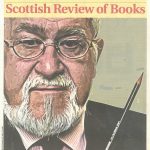 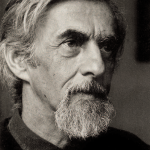